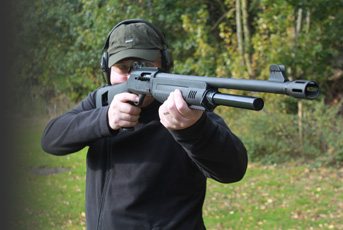 With target and practical shotgun becoming ever more popular it is nice to see Hatsan updating their ever-popular tactical semi-auto shotgun. It is seen as the entry-level gun due to its price and the fact it has all the features you require. If you want you can shoot one of these guns straight out of the box without having to spend any more money on tricking up the gun. That is what I had to do with my target semi auto shotgun; I could not afford a new Benelli so had to get a second hand one for £650 then spend another £300 plus getting it up to spec with a magazine extension and pistol grip stock, not to mention an extended bolt handle and sight rail. If I could have afforded a new one I would have still have had to fit all the go faster parts to it, making it a very expensive gun indeed. The MP-A comes in at half that price and fully up to spec straight out of the box, interested?

The Hatsan Escort MP-A takes 7+1 cartridges, so it is classed as a firearm and requires an FAC (not a shotgun certificate). It has a large bolt handle and pistol grip stock as standard. If the MP-A had been available when I started target and practical shotgun I could have saved myself a lot of money. Still, enough of my woe’s and lets get down to what the MP-A is all about, it is a semi-automatic gas operated magazine fed 12 gauge shotgun, for the UK market it has a 24 inch barrel to comply with our gun laws.

It comes as standard with a fixed choke, the chamber is 3 inch (76mm) so can take a variety of tactical ammunition. The pistol grip stock has two shotshell holders built into its rear section and it has sling attachments fitted around the magazine extension at the front and on the rear bottom of the stock, to allow the fitting of a tactical sling.

The pistol grip of the stock is covered in a rubber type material for added adhesion, it also has a groove pattern on both sides and a very pronounced pistol grip cap extension to stop your hand slipping off the bottom of the grip. The rear stock can also be adjusted for drop and cast with shims; 3 cast and 1 drop shim come with the shotgun.

The forend is similarly well thought out too, with the same grooved effect over the bottom of the curved section of the forend. At the very front of the plastic forend section is an 85mm long Picatinny rail moulded into the plastic; I have seen some owners of the MP-A fitting vertical hand grips here and they do seem to work for some stages of Practical shotgun.

In operation wise the MP-A is much simpler than the older Hatsan models. To load the gun the bottom loading gate has double bar system so you can load with one hand only without having to push a button in as on the older models. Hatsan call it the FAST Loading System, it’s a double bar loading gate design so
loading/re-loading is very fast, just the ticket for a practical shotgun where loading is really the key to having any great success.

When you cock the gun on an empty action the bolt stays back, at this point a shotgun shell can be placed in the breech, now comes the really cool and mega quick for loading part. When the bottom loading gate is then pushed up it closes the bolt and chambers the round. For ultra coolness the bottom of the action is just slapped with the hand and the action slams shut instantly. The gun takes seven in the magazine and one in the chamber, there is a manual safety catch at the rear of the trigger guard. Push in from the left and it is on safe and push in from the right and it shows a red ring around its circumference and it ready to fire.

One thing to note is the function of a small catch on the bottom front right hand side of the action below the loading port. Pushing this catch in prevents a round from leaving the magazine, it stays in until you push it in and forward, then it springs back out allowing rounds to exit the magazine. This catch can be used in a number of ways, as an added safety or to aid clearing a jam etc. without taking rounds from the magazine as you work the bolt (not that I had many jams to clear in the test).

A manual trigger safety button is sited behind the trigger. The bolt handle is perfect for a target/practical shotgun as it is an extended version on the MP-A, it is 25mm long and 10mm in diameter at its widest part, which is right at the end where you get hold of it. It also has four grooves machined around it for added grip.

Moving on to the open sights fitted to the shotgun; the sight base - or distance from the front post to the rear “ghost” ring - is a massive 700mm (27 ½ inches). The front post has a 15mm long red coloured fibre optic rod. The rod within the front sight post is adjustable for height relative to the shooter, it pivots on a pin at its center, a 2.5mm Allen stud at the front of the sight moves the rod up and down. The front sight post can also be removed altogether by undoing a 3mm Allen screw and knocking out a 2mm diameter pin.

The sight rail is held onto the action via four countersunk Allen headed screws. The 24 inch fixed choke barrel of the standard MP-A has a removable flash hider, which is 27mm long and has six radial 5mm wide slots. An “o” ring seals it at its rear when screwed onto the threaded section at the muzzle of the gun. A muzzle cap or thread protector comes with the shotgun if you do not like the look of a muzzle brake. If you want to go really over the top looks wise there is a massive mean looking Door Buster muzzle brake available as an optional extra.

Getting to shoot the MP-A I must say it was more pleasant to shoot than my recoil operated Benelli, the only down side to the gas operated Hatsan is the need to keep it clean, but that goes for all gas operated weapons. Hatsan call their valving system on the new gun the “SMART VALVE PISTON”, it adjusts automatically to what ever size load of powder you are using.

The comfortable shooting style of the MP-A may also be due to the stock having the rubber section on the pistol grip and the thick rubber butt pad. The standard MP-A is fitted with a fixed choked barrel, such slug shooting security/law enforcement shotguns are usually made with fixed cylinder barrels. This is not such a major disadvantage with practical shotgun but I decided to pattern the gun at 15 yards to see what the gun actually produced.

With Number size 6 shot out of a 32 gram cartridge I had a full pattern spread of 30 inches (760mm) in diameter, the majority (75%) were within a 16 inch (410mm) diameter circle. I also measured the internal diameter at the end of the barrel, removing the flash hider it came in at 18.32mm or 0.721 inches. 12 bore is 0.730, many manufactures use different dimensions for cylinder anything from 0.725 to 0.729. The 0.721 on the test gun also equates more to a skeet or even improved cylinder dimension. That explains the size of the pattern I got at 15 yards. Either way the MP-A with the fixed cylinder barrel will work with birdshot or slug. You can now get an MP-A 24” 7+1 with an adjustable choke barrel, it has the same front sight with a red fibre optic rod element but no muzzle brake as it is threaded internally for fitting different sized chokes. Both barrel types are Nickel-Chromium-Molybdenum steel with additional chrome plating.

There have been reports of some users who could not get the MP-A open sights to zero at 30 yards, but maybe they do not know the front sight can be adjusted too. There is even the option of packing up the rear of the rail with brass shims and defcon if adjusting or lowering the front sight is not enough. I would fit an optical sight like a red dot for slug competitions such as Timed and Precision One or Multi Target anyway, as I have done already with my Benelli (Coming 11th at the first ever National Target Shotgun Championships last year). The “ghost” ring sights on the MP-A are fine for practical as they are.

Overall I was mightily impressed by the MP-A, it’s a very well specified, easy to load, easy to shoot and great value for money FAC shotgun. I will be getting one as a pure target slug shotgun, leaving the Benelli for practical work.