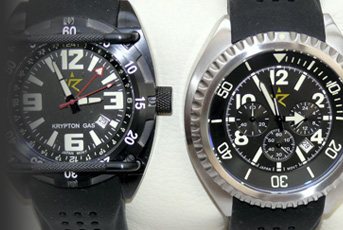 Ever fancied a real soldier’s watch? If so you can now add that all important piece of kit to your wrist and follow in the footsteps of legendary soldier; Commander Richard Marcinko. Recognised as one of the most accomplished special operation experts, Marcinko’s expertise in the world of counter – terrorism, intelligence and commanding officer of US Navy Seal Team 6 is legendary. He was also the chap who founded the ultra secret Red Cell, the scourge of the Viet Kong all earning him the nickname the ‘Rogue Warrior’.

You too can benefit from the original ‘Rogue Warrior’ himself, as Marcinko’s name is now associated with watch design. The Avenger Silver and Red Cell Black are both noticeably individual and distinctive in appearance whilst both are near indestructible!

Both come with non-allergenic, silicone, rubber straps along with an additional Israeli Velcro watch band as standard. Their shared technology comprises of a surgical steel case, Japanese quartz movement, 4mm crystal sapphire top coat glass with an internal anti-glare coating. Add to this super luminova batons and hands, dual time zone facilities along with a Kryptolite coating that glows in the dark. Filled with Krypton gas which eliminates internal moisture build up under extremes of temperature plus the option of camo finishes and alternative straps and bracelets.

In addition to this, each watch is filled with a substance called d3o. Developed by the British Army to protect severe head and knee injuries, this soft orange material undergoes molecular changes whenever it senses a shock. This will protect all interior components irrespective of the levels of abuse it may encounter.

Where these two models differ is in appearance. The Red Cell Black shows a simple, clear face which is easy to see and operate with the addition of two exterior bars that protect the face. Alternatively, for those who need even more precision the Avenger Silver is a true chronograph boasting a chunky straightforward rotating bezel and stopwatch facility, the additional external controls enhanced with screw down security.

Interestingly, besides the machine gun that appears on the rear of the case, there’s the abbreviated motto of the American Special Forces which reads WGMATATS. Perchance you should wonder what it stands for here it is; ‘We got more ass than a toilet seat’; take that whatever way you like…

Priced attractively there’s now no excuse not to be on time when the warning order comes through. So to be ready for the next call that’ll send you deep under cover…

For: If you like macho timepieces then right up your street
Against: Might be a bit too in your face for some
Verdict: If you’re looking for tough watches then worth consideration…