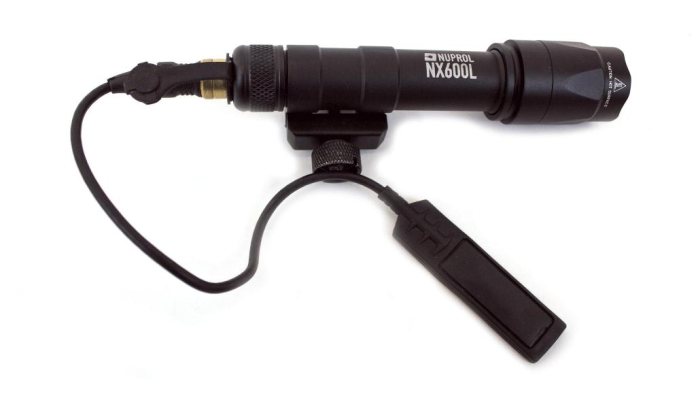 A while back I took a look at the range of tactical lights that NUPROL are offering. This was a tight range of just six models initially, two of these being LAMs for the L85 series. Of the others, three are for pistols and one specifically for rifles, carbines, and SMGs.

At £39.99 The NX200 is a light designed to be fitted to a range of railed handguns, giving the ability to quickly acquire targets in low light conditions, whilst allowing you to keep both hands on your pistol. The torch is constructed with an alloy body and head, a solid polymer toggle switch at the rear, and features a high power 200-Lumens Genuine CREE LED. The lights rear switch features an Ambidextrous Textured Toggle, allowing activation by both left and right handed shooters. Included in the box is a spare fitting plate and Allen Key. This is perfect for any night game or CQB situation, as you can light up an entire corridor or sweep out corners in any room with added accuracy and visibility.

The NX300 at £54.99 has the same excellent build quality of the NX200 but increases illumination to 300-Lumens, whilst being only marginally larger in the head area. The NX400 Pro comes in at £84.99 but not only does the power increase to a whopping 400-Lumens but you also get an incorporated adjustable laser. The back of the laser also holds the controls for several lighting options, including the torch and laser being on at the same time if your desire.

Moving up to the rifle model, theNP500X is real beast! It’s a quick detach RIS mounted vertical grip which incorporates a main 500-Lumen CREE LED main light and two low power LED navigation lights. There are dual pressure pads on the grip to activate the main light, and you simply twist the cap on the battery cover to lock the light off to prevent accidental activation. Again, a twist of the rear switch of the main light gives you permanent activation. The NX500X uses 3x CR123a Batteries (not included) and at £99.99 is a superb bit of kit!

The NUPROL team are always pushing forward though, and to add to this already impressive range, they have recently released their very latest models in the NX600 series. The two models, available in Black or Tan, are Long (L) and Short (S) variants. They follow the trend towards small, bright ‘scout’ type tactical lights that affix solidly to the rail of your RIF; designed specifically as rifle lights, they are made of high-quality alloy and are as tough as old boots.

Measuring 90mm, the S variant takes 1xCR123 battery and gives out a clear white light. The L variant is 125mm long and takes 2xCR123. Both lights have a very slim, low profile, and the single bolt clamp is equally minimalist. The two lights come superbly packaged with both a ‘rats tail’ remote pressure switch and standard tail cap, which makes them very versatile; NUPROL even include the Velcro strip to attach the pressure switch and a full colour instruction sheet, so they really have thought of everything!

Final retail prices were still awaited at the time of writing, but knowing the keen pricing structure NUPROL adhere to, I’m going to stick my neck out and say that I believe they will be very, very well priced. They’re a superb addition to the range of lights already on offer, and the one I’ve been using for a couple of months now is really performing amazingly, sitting happily and securely on the rail of my favourite CQB carbine.

In my mind, when it comes to low light CQB or night games, then NUPROL really have done the business yet again, proving once more their knowledge of airsoft, as players themselves, and knowing what we want and need. I am certain that they have even more to come and I’ll keep you fully updated as new items are released.