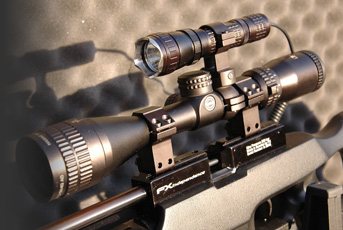 The Tracer Ledray 400 Tactical light is a versatile piece of kit indeed and what adds to the appeal of these tactical lights is the way they are offered as a comprehensive boxed set, including everything needed to get started.

Well-made and rugged, at around 5 1/2 inches long, the main torch itself is both compact and manageable, with a well machined aluminium body. A belt clip is enclosed allowing the torch to be just hand held, but as these lights are intended to be gun mounted I wasted no time in setting about installation.

Fitting is simple, with a dedicated split-ring clamp supplied (allen key included), which holds the torch. This interlocks via dovetails into a second clamp, which then connects to the scope tube itself - 1inch and 30mm clamps are included. If the remote switch is to be used for lamping, then the bottom cap of the torch body is just removed and the switch element screwed into place.

The design has a shatter proof front lens, with four different coloured filters included. Having seen the calming effects of green light when used against rabbits for example, just having the option to switch from pure white light makes sense.

Once installed, the beam is adjusted via the front collar. Twisting forward then back works through the brightness levels, with the brightest setting offering 4hours of continuous use, and a staggering 150 hours on the lowest. The ‘intelligent internal electronics’, providing a constant current output, which apparently extends the battery life.

On the brightest setting, I found the beam presented a focused central pool of light, within a much wider band of dimmer light. Illumination was excellent at 100yds and very usable at around 150yds on test, so the stated 170yds capability is a fair one in my view. If this doesn’t satisfy, then a more powerful model is available.

The makers point out that this Tactical 400 is suitable for scopes with an objective lens of up to 50mm. After which, the scope bell may well foul the torch body tube on assembly.

Performance was genuinely impressive, and with the mounting bracket offering quick release via the large circular bolt head, this Tactical 400 package has clearly been well thought through; and as such has much to offer the shooting enthusiast or professional.