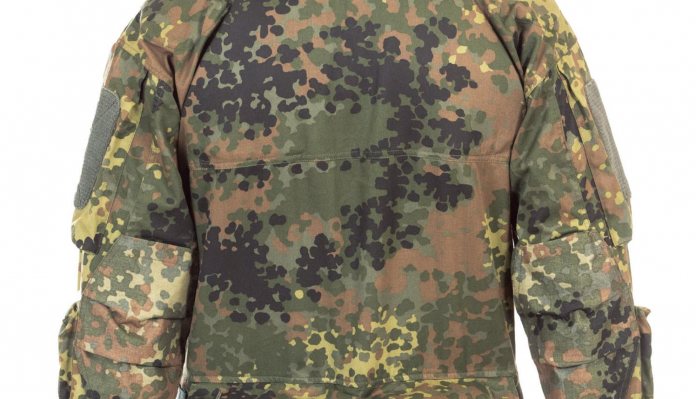 As announced at this year’s IWA exhibition in Nuremberg, in September UF PRO released their new and innovative Striker Stealth /clothing-footwear”>Smock to the international market. The UF PRO Striker Stealth Smock merges features of a combat jacket and a load bearing vest in a very unique way, bringing a classic design bang up to date.

Ever since the paratroopers of WWII adopted the classic smock design, it has been the trademark of high-end users worldwide. However, with the increased use of chest rigs and plate carriers, many have questioned whether such a design is still valid for the modern battlefield. To answer this, the Design Team at UF PRO have completely reinvented the concept with a unique twist.

After being approached by a highly renowned elite German military unit in search of a jacket which would offer a full pocket functionality for their most essential gear on a 24-hour mission, UF PRO came up with a design so that the jacket could carry a wide range of gear; the Stealth Smock can be loaded with as much as 12-15kg, but in order to maintain user agility with a fully loaded jacket, they had to rethink the whole concept of a smock design.

A substantial part of the new Stealth Smock is the breathable load bearing system, which consists of two modules; a waist belt, which not only carries the weight but also fixes it onto the hip area, and a huge area of air/ pac® inserts in the upper torso and back area, which carries the remaining weight. The cool thing about the Stealth Smock pocket configuration is that it is functional and modular. The integrated front MOLLE system allows you to either attach your own or the new UF PRO pouches, and with the additional chest pockets, a huge lower back pocket and arm pockets you’ll probably stow away so much gear that you might even consider leaving your backpack at home!

The Striker Stealth Smock can be equipped with the UF PRO Elbow pads, and benefits from the excellent Hood/Harness system which allows you unhindered vision, air circulation and good hearing while wearing the hood. MultiCam and PenCott GreenZone variants are created using a combination of 50% Nylon, 50% Cotton Ripstop, and 100% CORDURA fabric in the reinforced areas, whereas Flecktarn and Brown-Grey make use of 67% Polyester, 33% Cotton Ripstop, and 100% CORDURA fabrics, all of the very highest quality and durability.

The unique load-bearing system of the Striker Stealth Smock, combined with the choice of first rate fabrics and some cuttingedge design, ensures that even fully loaded the jacket does not get caught up around you whenever you make a move. It ergonomically distributes the weight over the whole torso and provides truly excellent levels of comfort and performance.

Starting from €330 the UF PRO Striker Stealth Smock shows a glimpse of the future for the most discerning end-users!