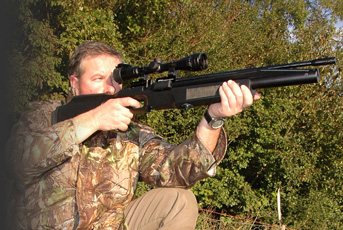 OK; cards on the table time. I admit to having had my name down on the waiting list for one of the Dragon air rifles a good many years back. Oh… and unsurprisingly I registered something of a serious interest when Webley began advertising their highly innovative Paradigm rifle too.

The Dragon of course, failed to deliver full power in the smaller calibre, disappointing at a stroke (sorry) a host of potential buyers; whilst the Paradigm story also seems set for a bumpy ride… with ‘conspicuous by its absence’ just about summing it up.

What these rifle blue prints share of course is the holy grail of air rifle design – the promise of a Single-Stroke Pneumatic.

My test rifle here hails from FX Airguns in Sweden, and if this example is anything to go by, it may just succeed where others have faltered.

I happen to know that my passion for this style of rifle is shared with many fellow disciples of the art, and the quest for a totally self contained, full-power pneumatic remains the pinnacle to our airgun world.

But FX don’t stop there, effectively taking the concept one stage further by offering the shooter the option of either charging the rifle via the integral pump lever, OR connecting the valve to a divers bottle in the conventional way. As if that wasn’t enough, the Independence happens to be the first production air rifle to be fitted with Ben Taylor’s remarkable invention, the brand new Smooth Twist barrel - so plenty to get stuck into then!

Technology overload maybe, but I really couldn’t wait to get up close and personal with this exciting newcomer!

With a plethora of PCP’s on the market, all sporting derivative designs, the Independence comes as a genuine breath of a fresh air. So let’s nail that specification, and place its function and performance under the spotlight.

FX are one of the leaders in the use of synthetic stock materials, offering most if not all of their models in alternative black furniture, and the dedicated stock fitted to this rifle is a chunky design offering a right hand thumbhole, drop-down grip and adjustable butt pad. Given the ‘no limits’ nature of synthetic moulding though, the omission of a shelf to accommodate the ‘thumbs-up’ position, is disappointing.

An unusually chunky 1.5inch diameter compression cylinder stores the pressure, whilst an integral pressure gauge (an essential inclusion in a rifle of this type), gives the shooter vital feedback as to residual power supply. The pumping lever is a clever design, being ergonomically offset, resulting in the compression stroke falling to a natural angle - more of which in a moment.

The large style, metal cased FX rotary magazine system provides 12 shots, which are loaded via the slightly bizarre routine as follows: with the clear cover facing, turn the front cover anti-clockwise against spring pressure, until it comes to a stop. Holding against spring pressure, turn the mag over and load one pellet skirt first into the one visible chamber. This holds the mechanism, and the mag can be flipped back over and a pellet dropped conventionally into each chamber.

Loading the magazine into the rifle simply requires the delightfully subtle side cocking lever to be pulled back (minimal effort required here) which cocks the hammer and draws back the bolt probe as it goes. Push the mag into its slot within the action from the right hand side, close the lever, and a pellet is automatically chambered. Subsequent cocking of the lever indexes and chambers a pellet in turn, and on test, cycling the action worked flawlessly.

One concern was the annoying detail of the magazine drum lid self-tightening as pellets were loaded by hand, prior to fixing the mag into place. Relieving the central screw slightly with an allen key, resolved the problem, although I had to keep the allen key nearby!

Cylinder Filling or Pump Charging – or Both!

Given the unorthodox design and specification of the Independence, it was only fair that a thorough investigation as to the options posed to any prospective owner, was undertaken.

First, that outsized cylinder was charged from a bottle via the valve to the suggested maximum pressure of 200bar. Then a full cycle of shots were monitored over a chronograph, with interesting results. The first observation is that the Independence, when used as a conventional PCP, is extremely thirsty on air, to the point where the pressure needle can be watched jumping down, shot by shot. My results confirmed that 30 continuous shots are possible (within around 18fps on test), which whilst a fairly low shot count by today’s standards, is still plenty for a hunting trip say. By monitoring the velocities, and residual cylinder pressure recorded, over these initial 30 shots, my data suggested that the mechanism worked at its optimum between 130-170bar.

Although 18 fps variation is pretty good, once I switched to performing one single stroke of the pump lever after each shot, or two pumps after two shots, that consistency figure halved, to a superb 9fps over 30 shots. Using the pump lever in this manner, to charge the cylinder periodically, just keeping an eye on the gauge under the action, to maintain the desired pressure, results in some truly superb consistency; and as such, is easily my preferred method of charging the Independence.

Working the pump handle is highly manageable too, and arguably the easiest system of its type that I have used. One negative at this point concerns the pump lever itself. Firstly, the end grip needs a chunkier rubber handle, rather than the hard plastic end piece, to allow for a safer purchase through the stroke. Secondly, the handle on the test rifle tended to clatter into the side of the action, (marking the stock) and would greatly benefit from a subtle rubber pad to locate into. These minor points apart, the pumping stroke itself is a revelation, with some clever mechanical physics clearly going on.

As a measure of the user friendly nature of the Independence, I topped up the cylinder using just the manual strokes after that initial chrono session, when the pressure had dropped to around 65bar. 37 continuous pumps increased the pressure from 65 to 200bar, and with a charging routine sorted, the operation was anything but arduous.

Being built like an orang utang does help, but my preferred stance was to hold the butt into my groin, grip the action with the left hand, and raise and close the pump lever with my right. Different builds and preferences will obviously play a part here.

Straight up with a Twist

And so to the crux of the matter- how does the Independence, and that Smooth Twist tube perform where it matters?

Initial tests were a little worrying as market leading JSB’s in the form of Air Arms Diablo Field pellets, became the first casualty. Over 30yds, groups of well over an inch were certainly not what I had in mind, especially given the high quality trigger complete with a nicely shaped flat blade and crisp release.

Crosman Accupell’s soon showed though, that the Independence can perform with the right pellet, and with sub half inch clusters regularly printing, confidence was restored. Logun Penetrator’s posted much the same highly pleasing results, but as always, personal trials are well worth the effort. As for the Ben Taylor designed Smooth Twist barrels, it’s obviously too early to pass judgement. I can’t help thinking though, that they are unlikely to surpass what is already out there. Trimming costs at the manufacturing stage is an undisputed advantage however.

As far as ‘shootability’ goes I reckon the Independence would benefit from the addition of a silencer, adding weight to the muzzle, and stabilizing the proceedings even further; a simple matter of unscrewing the ported end piece, and twisting the silencer into place.

As it stands, this rifle is a fantastic achievement on a technical level, with an amazingly consistent, highly manageable, self-contained power plant on board.

Is it worth the best part of a grand? That’s not so easy to answer. What it offers however, is a totally unique, incredibly versatile, well thought out package that goes some way to keeping us single stroke aficionados happy. And to that I raise my glass!