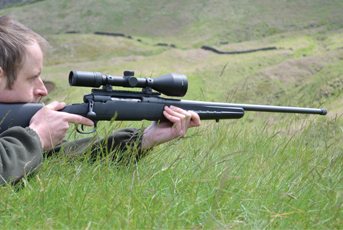 Born as the ‘edge’ and quickly renamed the `Axis`, this new Savage was designed from the ground up to offer quality mechanics at an affordable price using intelligent design to streamline the considerable expense of assembly. On a recent factory visit I watched it being built and it was easy to see where savings were being made as it leapfrogged whole sub assembly stages.

Calibres go in and out of fashion and Savage has chosen well, sticking to proven favourites for all hunting needs. You get 223 up to 30-06 with our UK favourite 243 Win here on test. Guns start out with a button rifled barrel, here in a Sporter profile and presented at 22” with a 1 in 9 1?4” twist rate. This is an excellent choice as it adds a little more surety to our UK legal requirements to stabilise 100gr bullets accurately. It’s screw cut 1/2”UNF for a moderator, thread protector included shrouding a recessed crown. At 0.6” the slender profile accompanies the overall lightweight build of the gun, a virtually straight taper increasing diameter to 1” where it meets the usual Savage barrel nut enabling barrel fixture and chamber headspacing.

The action is cylindrical with a solid top, drilled and threaded for the included full-length Weaver/Picatinny rail. Two generous gas escape vents show at the front to guard from case ruptures and the overall matt bead blasted finish has so far seemed durable and glare free. The bolt shows Savage’s trademark floating head with dual locking lugs, a plunger ejector and neat extractor claw recessed into the right hand lug’s face.

Although the instructions are sparse, it seems the bolt face can be removed and changed if a different calibre is added in the future, and this of course runs in parallel with the continued use of the easily removed and refitted barrel nut assembly. At the rear of the bolt we find a cast handle fitted to the shaft with an oval knob and small black external pin representing a cocked or fired action. Unusually, all the firing pin cams and springs are set forward of the bolt handle and when closed, remain nestled within the action’s walls out of dust and debris.

Beside the bolt knob, a release catch combines with the trigger to allow bolt insertion and removal. The action does not have a rear tang, instead the trigger sub assembly bolts to the underside of the gun and extends rearwards showing a two- position safety catch behind the bolt, forward for FIRE and back for SAFE, neither stage locking the bolt.

Underneath there’s a polymer/steel, detachable, 4-shot magazine with a single recessed plastic catch at the front. When clipped in it fits seamlessly with the well, but make sure it goes in flush as if it’s left ajar, it takes a slap with the back of your hand to push it fully home before you can remove it.

The bolt was smooth in operation, feeding and ejecting with primary extraction easily a match for Hornady’s Superformance ammo.

Sadly as manufacturing standards have moved forward elsewhere, common sense has taken a back seat and lawyers have taken over to give us `safe` triggers? The slender steel blade is well placed and comfortable but at 64oz, yes 4lbs in weight and non-adjustable it takes a very firm squeeze and careful control not to `pull` a shot!

Included in the package is a set of Weaver Grand Slam 1” steel rings to complement the 3-12x50 Kaspa scope. The only seemingly purely aesthetic move made in the gun’s design was a single flat facet added to the left side of the action.

The lightweight, polymer, sporter stock shows complex internal 3-dimensional injection moulding to negate further machining. Two bolts fasten the action either side of the mag well and the rearmost one also fastens the trigger guard sub-assembly to the gun. This looks to be the component swapped to allow longer magazines for 30-06 based chamberings to fit in the same chassis.

Closer inspection reveals two slim metal pillars support the bolts preventing stock compression so a subtle but significant benefit. Although the barrel does float, the forend is flexible and the gentlest handling of the gun sees very definite variable barrel contact, which is not ideal. In a similar way to Tikka, a moulded pocket within the stock holds a steel recoil lug that mates with a cut-out between the action face and barrel locknut.

This one did seem to be a very firm fit so inspired confidence. Otherwise, the stock showed a straight comb and grippy yet stable recoil pad; the length of pull at 14 1/8” was a pleasant surprise, as many guns seem to be shorter and more cramped than this. The grip gave good reach to the trigger and although it was slim, recessed stippled panels are comfortable. Similar panels were featured in the forend punctuating an overall matt surface finish. A slight beavertail profile to aid grip was still very slim and I just wish it had been made larger and stronger. QD studs are fitted fore and aft so no problems for slings or a bipod!

To be honest; the stock did not inspire confidence although in concentrated test firing I was confident I would get the best from the trigger. Mounted up, bore sighting and zeroing the scope went without hitch as the package guaranteed all components would fit together perfectly. Fitted with a Dual X reticle, Edgar Brothers specifying a 50mm objective rather than the 40mm specified in the US as it is more appropriate to our UK low light shooting scenarios.
The 1?4” clicks worked fine although the windage turret was not marked left and right, just up and down. Done no doubt to save a few cents, but confusing for novices. I fitted a Harris Bi-pod and at 100 yards prone both 58-grain Hornady Superformance V-max and 95gr SST ammunition showed good velocity figures at 3750 and 3140fps respectively.

Accuracy from a stable prone position with careful trigger control was stable around an inch at 100 yards for the 58’s and 1 1?2” for the SSTs. When I moved on to some positional shooting, specifically standing with sticks, the flexible forend was slightly more stable than I had given it credit for. But at this point the trigger did seem painfully heavy and a deliberate effort had to be made to remain patient. As any kind of snatched technique not only led to the stereotypical ‘pulled shot’ but also a ‘pulled stock’ as an observer was clearly able to see the barrel pressed side to side.

The amount of moulded three dimensional detail to the stock assists in the decision, a serious amount of money has been invested in the injection moulding dies to mass produce them. Although the trigger group does show an adjustable spring, it is sealed with threadlock and the mechanics would need serious tweaking to operate safely with less spring preload set into them.

I have mixed feelings, I really liked the ethos of providing an honest package to beginners! Light and handy at 7.4lbs and only 44” long it was a joy to carry and shoot with smoothly felt recoil. I cant help but think a heavier forend and better trigger, although increasing the price, would have allowed this a gun to punch far above it’s weight.

In field conditions the rifle’s ability grew in my estimation and I have to admit that although I remained dubious, it didn’t surprise me and I learned to restrict myself to shots to which the gun had proven itself reliable. Nothing more than 200 yards on vermin and deer at 100-150, but I never relaxed my technique, always being attentive to gun support and hand pressure.

I had a play on some 12” steel plates at 400 yards using the V-max and the bullets struck their intended target within my ability to judge the wind. I wouldn’t have shot live quarry at that range. In truth a gun at this price is made to be SHOT, SHOT, SHOT and the beginner will get a lot of fun from it whilst plinking and learning to stalk in close to their quarry.