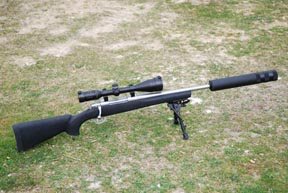 You may recall a few months ago Don Brunt gave us a quick tour of the Howa 1500 series of rifles and I have to say that price-wise alone the guns looked like a good bet. However, I was keen to go ‘hands on’ to see how this Japanese-made rifle compares to the market leaders. A phone call to the importers Highland Outdoors got me a stainless 270 Winchester in a Hogue, rubber over-moulded stock to play with. This came as part of their package deal that included a Nikko Stirling (NS) scope, rings, bases and a UK Custom Shop Predator 8 moderator. Naturally enough the guns come threaded and proofed 1/2x20” UNF courtesy of UK Custom Shop.

Don gave us some history on Howa in his article, suffice to say they have been making rifles for a long time and their real claim to fame until offering their own brand was to make Vanguard and Mark X rifles for Wheatherby. So in terms of pedigree we are not dealing with an unknown quantity…

Howa have kept it simple and familiar with a top-loading action and hinged floor plate for an en-bloc unload. To my eyes the build is Remington 700/Winchester 70 with a big twin lug bolt that shows a fully supported head and plunger-type ejector like the Model 700. As is the sliding safety, though it offers three positions – FIRE, SAFE (with bolt operation) and SAFE (bolt locked). Bolt head, handle and release catch are very Model 70.

The action shows a large/integral recoil lug and the bottom iron is held to the receiver by two mounting screws. The trigger is grooved and of medium width, the pull is a workable 5-6 lbs with virtually no creep. I would prefer it lighter and inspection of the Model 700-like mechanism shows two adjusters that can doubtless offer that. The finish is a pleasing satin stainless and the sporter-weight barrel measures 22 ¼” from the threaded muzzle to gas escape port.

Howa offer a number of stock and finish options, but this stainless 1500 was dropped into a Hogue, rubber, over-moulded unit. This is the basic version that offers a fibre glass inner chassis with aluminium pillars with the rubber moulded directly on to it. It’s a good design but the forend proved to be very flexible as under pressure it can bear on the barrel and cause changes in point of impact. So if you use a bipod, keep this in mind when you have to shoot without it, as the barrel is not properly floated in the channel.

The butt shows a straight comb and thick, rubber recoil pad, while length of pull is 14”. The pistol grip is hand filling as is the forend and both show cobblestone, chequering panels to improve grip. QD sling studs are fitted as standard. Generally this is a nice unit, though the caveat of the bipod and the flexible nature of the forend must be considered. Saying that, Hogue also offer a similar design but with a full length, 7075 aluminium bedding block, that tends to make things more rigid…

For glass I fitted a Kahles CL 4-12x52 L multizerO in 1” Warne rings, the NS rings are similar being vertically split. Bases again are NS and consist of two 1” dovetails with recoil slots. Ammunition went to 130-grain SP from Prvi Partizan (PPU) of Serbia courtesy of importers Henry Krank & Co Ltd. To negate the forend/bipod conflict, shooting was done off a range bag.

My first impression was of a stiff bolt, as it was hard to put it into the action and close it. This eased up after some dry cycling and firing about 20 live rounds and never occurred again… Clipping rounds into the magazine was easy but on going to chamber the first one the bolt would not move it. Initial inspection appeared to show the feed ramp had not been fully cut, so the nose of the bullet was banging into the face of the magazine box. The test continued with every cartridge having to be single loaded, which was a pain.

However, when I took the gun apart to check out the recoil lug arrangement I discovered the problem, as the mag box had been put in upside down by someone. This meant the cut-out at the front of the box that allows the cartridge to be fed was not there, reversing this component cured the problem. This also might have accounted for the initial stiffness of the bolt movement, as the receiver might have been stressed and caused the binding. Though not good, these things can and do happen on mass produced items and thankfully in this case; were easily sorted…

With the PPU the Howa was shooting very well indeed and easily putting up 1” groups at 100 yards, which was confidence boosting. However, there’s no question that 270 Winchester is maybe a bit much for your average deer hunter, as it’s a big and hefty calibre. Fitting the Predator 8 calmed things down; though there’s no doubt in my mind 270 is a noisy cartridge!

With the mag box problem solved, feed and function were 100%. Out of interest I chronoed the ammo and the PPU was producing an average of 2848 fps/2340 ft/lbs. The extreme spread of the shot strings worked out at 25 fps, which was not bad either.

Calibre aside the 1500 worked and shot well for a standard factory rifle. Post firing check out showed that the hefty recoil of the 270 Winchester had loosened off the mounting and action screws a little. Normally I do not use any form of thread locking compound on these areas, but feel if you are going to go for this and similar calibres, it might be a good idea.

Slight and easily solved hiccups aside I thought the Howa 1500 was generally a good and competent rifle, though I would have liked the choice of the better version of the Hogue stock with the full length aluminium block. If that is not available then I would sooner go for the cheapest stock, as it would be likely that I would put something better on it. The option of the package deal (moddy/optics etc) is also attractive as it means a one stop shop to fit your gun out how you want it and this includes proofing in the price.

Howa certainly seems to have addressed a definite niche in the UK market for a solid hunting rifle at sensible money and is a brand well worth taking a closer look at. From what I can make out sales to the trade are very good, so you should be able to see examples at your local gun shop.