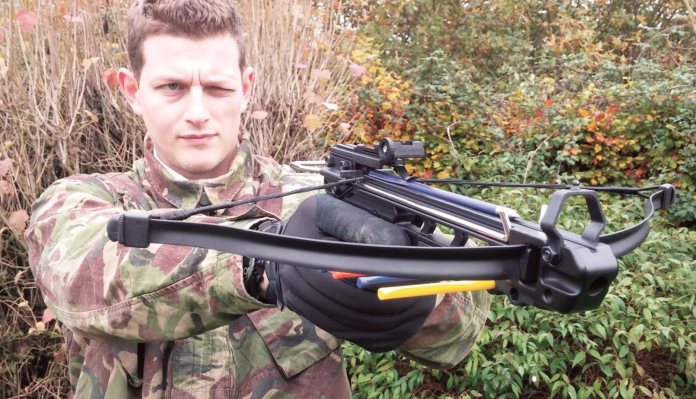 The Komodo is just one crossbow out of Anglo Arms 20-strong range and represents the budget-end of the line. It has a 50lb draw weight, which is perfectly sufficient for a crossbow of this size, but it’s not a problem if you fancy more power as the Scorpion and the Cyclone models have an 80lb draw weight.

The Komodo generates approximately 150fps with the plastic bolts supplied, all six of which can be stored in a very handy on-board quiver! It has a 5.5-inch power stroke which is tackled with a built-in cocking handle which is mounted on an aluminium chassis/stock. Aiming is taken care of with a bead at the front and a basic rear sight that allows for windage and elevation adjustments. This is mounted on standard dovetail grooves allowing the use of a red dot sight if desired. The crossbow measures in at about 12.5-inches long and 16.5-inches wide and weighs less than 1 kilo making it very light and pointable. The crossbow itself needs assembly and, following the instructions, I quickly attached the metal limb to the main chassis using the tools and components supplied. The difficult bit is attaching the bow string to the limb! I found the best way to do this was to lean one end of the limb on the ground and then to use my body weight to bend it sufficiently enough in order to allow me to loop the bow string on.

The Komodo is definitely at home in the back garden requiring only about 5-10 metres of space, making it ideal for people who want to enjoy target practice at home. All you need to make a start is a sufficient backstop. Its size should depend on your skill level, alternatively it may be best to start close and work your way back, adjusting the sights as you go to avoid losing any bolts! I used an old shoe box stuffed with old cloths and clothes and, packed correctly, this stops the bolt leaving the boundary of your property and also allows the bolt to be retrieved without any damage. Before starting I recommend putting some shooting glasses on, after all you are about to find out if you have put the bow string on correctly! Operation is simple and efficient, use the cocking handle to draw back the bow string until it is locked into position. Make sure the safety is on then return the cocking handle to its forward position (important to avoid damage), then place one of the bolts into the groove on top of the chassis. The safety is in the form of a metal bar at the rear of the action, allowing access from both sides, and is easy enough to use.

The performance was good and I really enjoyed myself. I was shooting at about six metres and could group the bolts so that they were almost touching. The trigger took a little while to get used to as did the firing cycle, but I would say that as a tool for practising shooting this little crossbow has a lot to offer, and it wasn’t long before I was positioning coke cans and the odd apple in front of my home made backstop!

Once I had gained some confidence in my abilities I moved the target back to about 10 metres, it was at this point that accuracy was being hindered by the size of the Komodo’s foresight which basically obscured everything. This of course would be easily solved with a basic pistol scope or red dot sight. Unfortunately I did not have one to hand!

I actually found the pistol crossbow a lot more fun than its bigger brothers, which you may find surprising; the reasons being that it is so easy and effortless to use. It’s not so powerful that you need a target/ backstop a metre thick just to stop the bolt, nor does it take great effort to cock and reload. It was just great fun and is less than £20! Being such a simple device there is nothing really to go wrong, so try one of these, you won’t be disappointed!