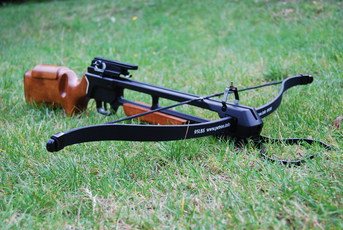 I have fancied the idea of owning a crossbow for a long time, given my interests in archery and field target shooting, I suppose it’s not very surprising; but what would I use it for?

Up until a year ago, the only xbows that were competition legal were restricted to a 90 lbs draw weight, and open sights. A few people within NFAS (National Field Archery Society) used to shoot them, but they were better suited to other disciplines. However, that all changed a little over a year ago when NFAS changed their rules removing the maximum draw weight clause and instead imposing a maximum velocity of 300fps, in common with all other classes. The new rules also restricted the class to recurve bows only and best of all allowed fixed mag and focus scopes (rather like HFT). Since the changes, the class has begun to grow and the sales of cheaper starter type xbows (as well as the more sophisticated hunting type bows) have grown and grown. So I thought it was about time I gave xbow a go.

There are a few simpler bows on the market and on the recommendation of a fellow NFAS member I took a quick look at www.crossbows4u.co.uk. A guy called Gary runs this company and it has a staggering range of bows, but I wanted something cheap, simple and preferably with a wooden stock. As it turned out Petron sell just such a bow.

I got the 95 lb model; to see how easy it was to use and how far I could shoot a relatively low powered bow. The bow is also available in 40lb and 150 lbs versions.

What’s In The Box?

In the box you get pretty much everything you need to take your first steps. The bow comes in big component parts, with the prod already strung. The assembly instructions are clear and easy to follow, so it only took about ten minutes to put it all together. Pay particular attention to getting the prod perfectly centred and level. The kit also includes a couple of aluminium arrows (known as bolts) as well.

The bow includes a simple set of target type sights that fit onto a standard dovetail. I chose not to use these sights and instead fitted a set of scope rings and a Bushnell 10 mag scope with a Mil-Dot reticule.

Construction of the bow is solid, with the stock and fore end made of solid wood, probably beech. The grip is a little on the large side; OK for me, but someone smaller might have a bit of a reach. That said, reshaping it would be pretty easy. The main frame of the bow, including the rail, is cast aluminium, as is the assembly at the front of the bow that holds the prod and foot stirrup and also the integral trigger guard. The trigger has a simple steel curved blade, nothing fancy, but it does the job. The stirrup is blued steel and the prod is made of compression moulded glass fibre. The adjustable dovetail is made of moulded plastic and appears to be a little on the flimsy side, but it took the scope, mounts and bubble without any problems. While on the subject of the dovetail; it is adjustable, to allow the dioptre sight to cope with different ranges. With a scope fitted the dovetail does tend to rock up and down a bit while the bow is being cocked and loaded, this does not affect the sights when the bow is shot, but it can be a little aggravating and one of the mods I shall make is to fix the dovetail in one position.

Time To Let Her Rip

One extra well worth buying is rail lube. This is applied to the bow to help reduce the friction between the string and the rail. I applied some lube, set the safety to the Fire position, and following the instructions I drew the bow up for the first time. At 95lbs and using my legs, drawing the bow was easy, I slid the bolt into position, and making sure it was snug up against the string I prepared to take my first shot.

Safety catch to Fire position, up to the shoulder and ‘plonk’. I was expecting something akin to a spring air rifle going off, so was pleasantly surprised by the very mild movement and almost total lack of recoil. After I zeroed the scope, I thought I would try one of my own bolts, which is made from a cut down carbon arrow (more on that in a minute). Despite the carbon being much lighter than the aluminium, the reaction from the bow was the same and the bolt was right on the crosshairs…COOL!

The bow has a decent heft to it, without being heavy, and is nicely balanced with more weight in the stock. As most shots will be taken standing, the rearward weight bias is comfortable and it holds on target very well.

The Petron does not by any means have a match trigger, but I have pulled a lot worse on some well known spring airguns. I have not tried to adjust the trigger yet but as standard the action is clean and getting a surprise break is not too difficult. If you are more of a snap shooting type, it will work just as easily for you.

One disappointment was the string. After no more than thirty or so shots, the serving at one end of the string started to unravel. This was not a disaster for me, as I have a bow stringer, which allowed me to take off the string for repair, but without the stringer I would have been stuck. I repaired the serving and put the string back on and all was well after that.

It really does not matter what you call them; they are the ammunition that is shot from the crossbow. As I said, there are a couple of aluminium bolts supplied in the kit, they are 16 inches long, with screw in field points and are fine to get you started, but very soon you are going to want more than two bolts.

I have been an archer for a long time, and have always made my own arrows. I am also a hoarder and always believe that ‘this will come in useful’. Well, on this occasion, I am right, and the many damaged carbon arrows that I have at the side of my workbench have found a new lease of life as crossbow bolts.

I have been advised by a fellow NFAS member to cut my bolts to 19”; this can be done by your archery shop, or (wearing a suitable dust mask) with a very fine modelling saw at home. I have an arrow saw, so having trimmed the broken bits from the old carbons, I glued point inserts in both ends and using a fletching jig, made up a handful of experimental carbon bolts. Of course you can always buy the bolts along with the bow, and either aluminium or the more expensive carbons will do the job very nicely thank you. Incidentally, for those who wish to save some money, 16” bolts will work fine and you can get two of them from one 32” arrow shaft.

How Far? How Fast? How Accurate?

Within NFAS, we shoot targets out to 60 yards, sometimes a bit more, so any bow is going to need sufficient velocity to reach that distance accurately. The 95lb model is really at the lowest limits for the task, but a quick chrono check showed I was getting 187 fps with the aluminium bolts, 199 fps with my home made carbons with 100 grain points and 202 fps using 80 grain points. These velocities are fast enough, given that some traditional and primitive recurve bows struggle to get anywhere near 200 fps.

Accuracy at close range is excellent, and after a bit of practice I was able to get bunched groups at 20 to 30 yards, after that my lack of practice and the light weight of the bolts started to take its toll and groups opened up. From the bench it was a much better story, and although the wind was still messing me about, ‘kill’ sized groups at 40 to 45 yards were possible. While testing at range I discovered why xbow archers use low powered scopes (typically 3or 4 mag), as at much beyond 40 yards I needed enough elevation to have the target face out of the bottom of the scope.

This is a cheap and easy way into the sport of crossbow field archery and I am told that for every £500 Excalibur or Ten Point xbow seen at clubs and shoots, there are probably ten bows like the Petron, so I have no worries about taking this bow to competitions over the winter.  As most people don’t have a 10 mag Bushnell sitting at home, any fixed mag, fixed focus scope will do and there are a number of excellent xbow specific scopes available that are NFAS legal, three of them are made by our own Hawke Optics. So for under £200 you could have your bow, a scope and a half a dozen bolts and be in the woods at your local club or competition.

As a final note; just as I completed this article the NFAS National Championships took place at Eastnor Castle in Herefordshire. I was there with my compound bow, but up against a field of 14 archers, Peter Hough, shooting a very similar bow to the one I reviewed, won the Crossbow class. This just goes to show what can be done with an inexpensive bow, and of course, a skilled archer.