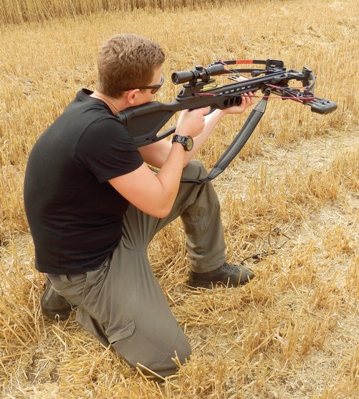 I have never used a crossbow before until I was sent two by Blades and Bows. I was keen to explore what they have to offer, as I doubt I am the only one who is curious about them. First the law; the Crossbow Act 1987 and the Wildlife and Countryside Act 1981 prohibits the sale and use of them to those under the age of 18 (unless supervised by an adult over 21) and also they are illegal for hunting, so targets only! If you would like know more contact the National Field Archery Society (NFAS) at www. nfas.net . Alternatively if you have suitable land you can use any crossbow as long as the projectile does not stray over the boundary! As with any type of shooting in your garden it is important to compose yourself correctly and to be aware of your surroundings and other people. Although crossbows are legal, they could be mistaken for a rifle and could be easily confused for one by a worried neighbour.

First the Armex Jaguar in a choice of 150 or 175lb draw weight, I had the latter! This is a recurve design using a single limb constructed of moulded, fibreglass mounted on an aluminium alloy barrel and black ABS stock. It includes 3 x 16” bolts, stringing aid, open sights, foot stirrup and tools for assembly. It looks pretty basic but has everything you need to get started. The sights are removable and can be mounted onto an adjustable Weaver rail, which allows a greater range of adjustment to compensate for trajectory/range variations. This will no doubt prove very useful if you intend to add a scope too. The energy generated from its 10” power stroke (the distance you have to pull the string back to lock it into place) means the Jaguar can launch its projectiles at approx 245 fps (depending on the bolt weight), making the Jaguar NFAS club legal as long as you don’t use a cocking aid.

Just to note both bows required assembly and come with full instructions, which were pretty clear. But some common sense is important as you are dealing with a lot of potential energy and if not done right they can break, probably in a spectacular manner! Give the importers a call if you are unsure!

The MK-380 uses a fibreglass quad limb compound system. A compound uses a series of cams connected by the string to give a mechanical advantage, which gives a high power output but with easier and smoother cocking effort. It is more powerful than a recurve as the velocity is greater even if it had a lower draw weight. Cocking is made easier which also means less force on the trigger sears. The 380 features a lightweight composite stock, 4x32 illuminated scope, detachable quiver, sling, string dampers and 20” aluminium bolts! It has a 175lb draw weight which leads to an approximate velocity of 360fps. This too uses a foot stirrup and is one serious piece of kit!

Assembly was simple as the string and limbs arrive as one module that just need attaching to the stock and frame (it is wise to note that replacement strings can only be fitted with a bow press). During the assembly I noticed the various features and aesthetic qualities that differ from the Jaguar, such as the rubberised coating on the stock and the increased power stroke which measures in at 15”. Although both crossbows feature a safety catch, this one not only includes an auto setting ambidextrous safety but also an ‘anti dry fire system’. Firing without a bolt can cause catastrophic damage and must be avoided!

I was sent a Tuff Stuff archery bag, you fill this heavy duty nylon sack with old clothes and sheets etc. Unfortunately, I did not compact it enough and the first bolt disappeared into the bag tearing of the flights in the process. I found that carpet is without doubt the best at slowing the projectile down sufficiently to retrieve it undamaged.

When cocking either model string alignment is mandatory. If not it can be set off to one side, which will have an adverse affect on accuracy when it fires, as one limb will reassert faster than the other!

With the Jaguar which was the smaller of the two, I found operation simple and quickly got into the swing of things. Cocking requires some effort and I tried various techniques and found a sharp and positive tug worked best, as any hesitation in the movement of the string towards the trigger mechanism made the process more strenuous. Blades and Bows do a universal cocking assist that works with the Jaguar, though it is not allowed to be used in NFAS competitions.

I started at 10m and worked my way back to minimise losing or damaging bolts by missing the target bag. The bolts dropped significantly each time I moved back by 10m and hit the effective limit of the sights at 40 meters. I was left under no illusion that there was still plenty of performance left in the Jaguar. Once I had got used to it I was able to get a pretty good rate of fire going and regarding accuracy, I was able to keep the bolts within the 15” ring on the target at 40m. With better sights and more practice I am sure I could do better! Trigger control and follow through are very important and represented transferable skills to the other types of shooting.

The MK-380 is larger and heavier and comes with a cocking aid which helps. This comprises of a length of cord, two handles with a pulley each and two hooks that engage the string. It creates a pulley system to pull the string back. You can cock without it, though I found it unpleasant compared to the Jaguar due to the nature of the compound system. The aid made reloading slower and fiddlier. However, as I shot more my reloading time improved. Velocity was up and the scope improves accuracy no end and I was really enjoying myself! I shot standing/unsupported and at 40m achieved 6” groups. I kept increasing the distance by 10m and the difficulty level increased as I began to reach the scope’s limit.

It goes without saying to wear eye protection and do not to underestimate a crossbow’s capabilities, as they are capable of surprising you and not in a good way! Although the bolts lose height quickly, their impact on target did not appear to be lessened by any noticeable amount as the distance increased. Those that fall short can still slide along the ground, equally they can ricochet too as I discovered! Like I said a good back stop is essential, as well as common sense…

Crossbows present a different set of challenges when compared to guns and could well appeal to a shooter looking for soemthing a little different. For the majority of people I would recommend the Jaguar as it is simple to use, serviceable, spare parts are readily available and cheap too. There is also a wide range of accessories/upgrades you can buy. Blades and Bows are offering the Jaguar at £49.99 in conjunction with the offer code JAG555.