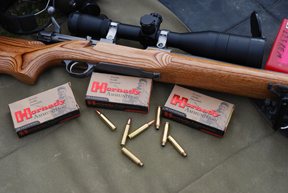 In the UK you would have to admit that the 204 Ruger kinda’ missed the boat. On paper this .20” cal (0.204”) was the logical progression of the 17 Remington, which had some brief popularity as the ultimate fox buster a few years ago. However, these days no one seems to want to give it house room…

Developed by Hornady, the 204 is based on a necked-down 222 Remington Magnum. In terms of ballistics it’s quoted at 3900 fps for the 40 and 4225 fps for the 32-grain V-MAX loads. It’s these two that have been the mainstay of the cartridge, though a 45-grain soft tip was introduced later.

In the USA the 204 was warmly received by varmint shooters, as its high speed and flat trajectory combined with the super frangible V-MAX bullets really blows up those critters… However, in the UK we tend to use rimfires for the majority of our rabbits etc, with centrefire taking more a back seat to this calibre group for that role.

Obviously the further out or bigger the target, the more powerful the calibre required, here numbers like 222/223 Remington and 22-250 are favourites. So already we have a bit of confusion with 204, as and though some use it for foxing, it’s never going to replace the established cartridges in conservative Britain. Why should it? As if your 223 Rem is doing the job, why bother getting something new? Frankly in the UK, I don’t think the 204 Ruger has really taken off though some were seduced by its impressive ballistics. I am one and own a custom 204, Ruger M77 Mk II VT (Varmint Target) done for me by South Yorkshire Shooting Supplies (SYSS).

Truth is, 204 Ruger is a critical cartridge in terms of twist rate, velocity and barrel length and one of the few reloading options I have never managed to match factory figures with either. So if it’s the speed of the 204 that turns your crank then stick with a 26” barrel, as that’s what Hornady uses to get their data and don’t bother reloading either as it’s impossible to get near those figures!

When I first got my VT I left it at 26” and the figures I was achieving with factory 32 and 40-grain ammo were not that far off the quote. However, I cut it back two inches and fitted a moderator, which showed a drop in velocity. A friend of mine took off four inches and now regrets it! Here’s what my 24” VT produces.

Note all speeds are average from a 3-shot string.

Comparing these figures to Hornady’s 204 reloading data shows that their factory ammo sits in the middle/upper velocity bracket in real terms.

Your average 204 Ruger rifle offers a rifling twist of 1-12”. which is designed to stabilise the 32 and 40-grain bullets and in my VT both these do well. Oddly enough when it was a 26” it preferred the 40s, now at 24" it’s the 32s that shoot best. If I have my act together; the worst group comes out at ½” maximum with either weight, though as I said the 32s seem to generally do a tad better. Either way good performance and confidence inspiring for long shots on small targets.

However, I do have my doubts about the .20” cal V-MAX’s effectiveness on animals like foxes, as I consider the bullet a bit too frangible; certainly on a marginal shot. I know people who have had success with both loads, but others that have not! The main complaint seems to be the bullet blowing up on contact and lacking penetration, with the animal running off; despite the fact it’s goings to die later.

However and in fairness the 204 was conceived as a pure varmint round, a job it does very well on long range rabbits, crows and hares etc with the two V-MAX options. So I was keen to test the 45-grain soft point load. This like the 32/40-grainers is available as ammo or bullets for reloading and gives a far better build for foxing needs. I adopt a similar policy with my 223 Rem, as to be honest I don’t like using V-MAX on muntjac, as they are just too destructive on the meat on a body shot. I use Hornady’s .224” 60-grain soft tip in my 20” Mauser M 03, running at a modest 2870 fps it kills monkies and charley all day long with no worries about second shots, under penetration or lack of knock down power.

Problem is; the 1-12” rifling twist is more a compromise with the 45-grain bullet, OK it doesn’t totally space out but group sizes of around ¾-1” are to be expected @ 100 yards, so at 200+ they could open up to 2-3”. I tested a Remy 700 in 204 with a 1-9” twist and that shot 40-grainers sub ¼”, but as for 32s; forget it, as at 100 yards you could be looking at 4-5” due to the lack of stability. However, for the fox shooter the 45-grainer offers a potentially stronger bullet that should penetrate better and expand in a more controlled and reliable manner, which is what you are after; certainly on a body shot at speeds of round the 3350/3400 fps mark.

Though offering a flat and effective rabbit/crow calibre 204 Ruger doesn’t appear to stack up that well to 223 Rem. With only three bullets weights; one of which needs a tighter twist to get the best out of it and real time reloads that can’t match factory, why would you bother? However, where the 204 really scores is in its superior ballistic coefficient over the .224”, which translates into improved, down range performance.

Taking a semi-hypothetical case using Hornady reloading data and a 45-grain, soft point bullet in both 204 and 224 shows that launched at a reasonably realistic 3400 fps the 204’s down range performance is superior to the 224’s in velocity, energy, wind drift and drop. Let’s look at 100 to 400 yards.

The 204 Ruger is a hard calibre to figure. I find myself liking and using it for longer range bunny/hare and crow shooting; where 17HMR/22 Mag are pretty much used up. I tend not to use it for foxes unless it’s a target of opportunity, but never assume it’s going to drop in its tracks, as I much prefer my 223 Rem.

In my 1-12” twist VT the 45-grainers shoot just on the edge of what I see as acceptable accuracy; however the performance of the 32 and 40-grain loads tends to make me quite critical of anything that steps over the ½” and better they easily produce. What I would like to see would be a heavy 40-grain soft tip from Hornady that might bridge the gap between a stronger bullet for foxes but in a standard twist rate.

There have been a few times when I have considered binning my 204, but I never do, as the enjoyment it gives me is in a pure, small varmint calibre in an accurate, mission-specific rifle.

My thanks to Wayne Holt (Hornady) and Kim Pritula (Sturm Ruger) for their help.