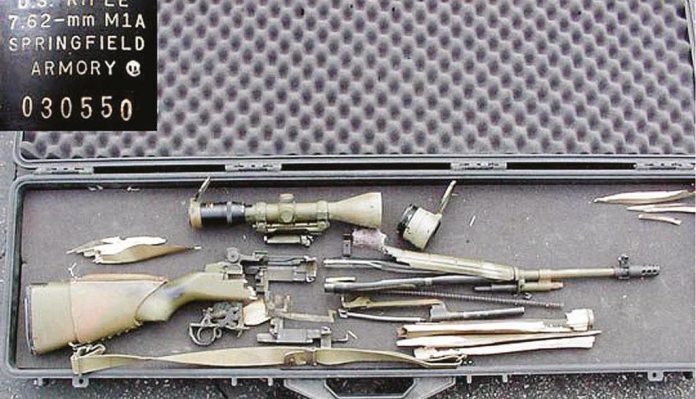 On the range a few months ago, I overheard the following statement, (I paraphrase) “If the bolt closes alright, then the ammo must be a good fit”. I have a reputation for poking my nose into other people’s conversations, but on this occasion I bit my lip and walked away. As I did so, I mused on the fact that the bolt on his 7mm Rem Mag would close ‘alright’ on a .270 Win round but the consequences of pulling the trigger would be a tad interesting!

My thoughts later returned to the subject of cartridge fit, or headspace; the dimensional relationship between the cartridge and the chamber that ensures safe use. In firearms, this is the distance measured from the part of the chamber that stops forward motion of the cartridge (the datum reference) to the breech or bolt face. It also refers to the interference created between this part of the chamber and that part of the cartridge that achieves the correct positioning. Put simply, it is the distance from the head of the case (point above the rimmed or rimless section at the rear) to the point that prevents further forward movement. Different cartridge designs have their datum lines in different positions in relation to the case. There are four basic methods of establishing headspace, but inevitably there are also exceptions.

Each design type has features which need to be understood. Seemingly, the simplest of the types are rimmed, straight wall cartridges.

These are positioned by the top surface of their rim and the overall ‘fit’ dimension is set from that surface to the bolt or breech face of the firearm, equating to the rim thickness. Chambers designed to hold cartridges of this form can sometimes accommodate ‘lesser’ cartridges of the same rim dimension and case diameter. One of the best examples would be my revolver in .357 Remington Maximum. The cartridge is an extended and strengthened version of the .357 S&W Magnum cartridge and it, in turn, is a stretched version of the .38 S&W Special.

All three designs can be chambered and safely fired in my Dan Wesson Mod 40 SuperMag. Indeed, the limiting factors are at the other end of the cylinder. Unlike some early revolvers that had through bored chambers, the Max has a step in the chamber that limits overall case length to 1.6100”. Furthermore, maximum cartridge overall length (COL) is determined by the revolver’s 2.125” cylinder length.

Interestingly, SAAMI sets the maximum COL at 1.990”, a figure that was determined by the unwillingness of Ruger to change the frame design of their Maximum revolver from that of their stock .44 Mag Super Blackhawk. It was a decision that contributed to the early demise of their Max revolver.

Part of the same technical group are the rimmed bottle neck cartridges. A veteran example would be my .303 British. The ‘fit’ dimension is the same as above but there is another important consideration. It goes without saying that such chambers are ‘one calibre’ only. But here begin the exceptions! Check out the slightly less veteran semirimmed .220 Swift. It has a rim, but the reference headspace is from the bolt face to a reference length almost midway down the shoulder; à la rimless bottleneck!

Our next category comprises the rimless or rebated rim parallel or (slightly) tapered wall cartridges. Mostly, but not exclusively, designed for use in self-loading pistols, such as the .45 ACP or 9mm Parabellum. The absence of a rim means that the case has no reference point along its length and is therefore positioned by the case neck making contact with the end of the chamber. The headspace ‘fit’ dimension is therefore from the face of the breech or bolt to the locating undercut in the chamber.

The nature of this location point means that great care must be taken not to reduce the cartridge neck diameter to a dimension that enables it to move forwards beyond the step in the chamber. The use of heavy roll crimps can result in the neck of the cartridge entering the throat of the barrel and seriously restricting the controlled release of the bullet upon firing. The increased pressures caused by this poor assembly procedure can prove destructive.

The most common type

We now look at the most common design, the rimless or rebated rim, bottleneck cartridge. It shares a lack of locating rim with those above, taking its datum from the breech or bolt face. However, the forward reference point is mostly (exceptions exist) a point midway down the shoulder taper cut into the chamber. It is almost always cross referenced by an intersect diameter of the taper. The two figures can be used to easily establish the accuracy of a reamer. Our popular .223 Remington cartridge being a good example of this type.

Finally, we come to the bruisers of the cartridge family. Almost exclusively employed in big game style rifle cartridges, we have the belted case. Some are straight walled; others are tapered, or bottle necked. Often mistakenly assumed to be a strengthening feature for these potent designs, the true purpose of the belt is to provide a safe and reliable location point within the chamber. I remember reading a Gun Digest article that claimed that the belted 300 Win Mag head spaced on the shoulder… I would refer the author to Page 62 of the SAAMI Rifle database.

At the beginning, I quoted an example of the ultimate sin, chambering the wrong cartridge in your rifle. It is important to remember that the application of correct headspace dimensions to the cartridge and chamber does not guarantee that the wrong cartridge cannot be inadvertently chambered and worse, actually fired. In fact, there are many cross calibre permutations. Some will prove relatively harmless but the majority are likely to cause catastrophic damage to the firearm and serious if not fatal injury to the shooter or those nearby. If you are carrying more than one calibre of ammo, it is advisable to keep them in segregated packaging and NEVER loose in a pocket or bag.