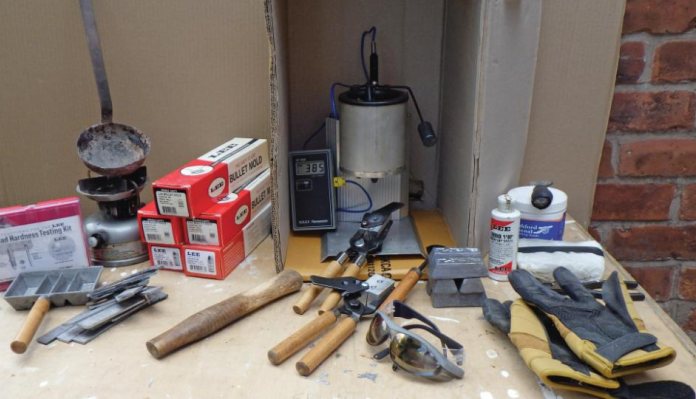 By far the most expensive, single-use component used in reloading is the bullet. For this reason, some shooters cast their own, saving a lot of money and adding another element to the hobby of reloading. It is not feasible to make your own jacketed bullets, but some lead ones can have a copper gas check fitted to the base for protection, allowing them to be pushed a bit faster and used in a wider variety of calibres. Generally speaking, lead bullets are most suited to pistol calibres and rifle rounds at the lower end of the velocity scale.

If you are thinking of giving bullet casting a go then there are a few factors to consider; cost and safety. Cost is subjective and you can spend as much or as little as you choose, safety is far more important as the process does come with some significant risks.

The main piece of equipment you are going to need is an electric melting pot like the Lee Precision Production Pot IV. Much like an electric kettle on steroids, it uses an element to melt the lead, and some models feature a spout on the bottom of the pot, directing molten lead into a mould. Alternatively, it has to be scooped out with a ladle.

found on moulds is that they generally consist of a metal block with a bulletshaped cavity, or cavities, made up of two equal halves inside. You will need a one for each type and calibre of bullet you are going to cast. After being filled and left to cool, the two halves of the mould are pulled apart to release the projectile.

Secondary equipment includes safety wear, something to stir the lead, flux, bullet lube and sizing tools. The items of kit will be considered in detail next month but a basic setup will cost around £200, however it will pay for itself fairly quickly. With every thousand bullets cast, you could be saving in the region of £80, so how quick you recoup your set up costs will depend on how much you shoot. As with the other aspects of reloading, how much you spend on the equipment is up to you, and there is an endless supply of accessories to make the process quicker, easier and more precise.

Once you have your equipment you need some suitable materials. With pure lead being too soft for most calibres you will need to cast with an alloy of sufficient hardness to resist the temperature and stress of being fired through your gun. Readymade alloys can be purchased, but they are not cheap and so eat into potential savings. It is better to source and mix materials yourself, utilizing spent lead from your local club, or scrap metal scrounged from wherever you can get it.

When melting it the fumes represent a significant hazard as they can enter your lungs and be absorbed. The process must only be carried out in a well-ventilated area. A garage or shed is not really suitable unless you have good airflow through the space or some means of mechanically extracting the fumes from directly above the melting pot. Far better is an outdoor location, although this might mean the task is a fair-weather activity. If you can work outside, with the wind blowing the toxins away from you, then you will reduce the risk of inhaling the fumes to a more acceptable level.

The second very significant hazard of working with molten lead occurs if there is any water in or around the working area. If you are adding lead to the pot which is wet, or if working outside it suddenly starts to rain and water falls into the molten lead you will get an explosive reaction. Having experienced this myself, when on a clear sunny day it suddenly started to rain, I can confirm that the amount of molten lead blown into the air after a single drop of water hit it has to be seen to be believed! Molten lead droplets hit everything, including myself, and without protective goggles and clothing significant injuries could have been caused. It is a very good idea to keep the melting pot in an enclosure with a roof, as well as keeping out any rain this also helps keep the pot up to temperature. A simple cardboard box of the right size and shape works just fine.

Also related to the temperature of molten lead, burns are a significant risk and for that reason you should make sure that as much of your body as possible is covered. Eye protection is obligatory as are long sleeves and trousers. Clothing should be cotton or a similar material that will not melt and stick to your skin. Gloves are certainly recommended although they can be a real hindrance. Just in case you do burn yourself, it is worth having a bucket of very cold water within reach. It goes without saying that the water should be far enough from the casting operation to ensure water and molten lead never meet!

It may seem a bit over the top to dedicate almost an entire article to the safety issues around casting your own bullets, but it would be irresponsible to write about the subject without first fully explaining the risks. The task can be done safely, provided you do it properly, and it can be rewarding financially as well as adding another aspect to your hobby. If you are confident that you can do it without putting yourself or others at risk then it is definitely worth giving it a go. Next month we will take a look at some of the equipment that you will need as well as some money-saving ideas to help keep that initial outlay to a minimum.