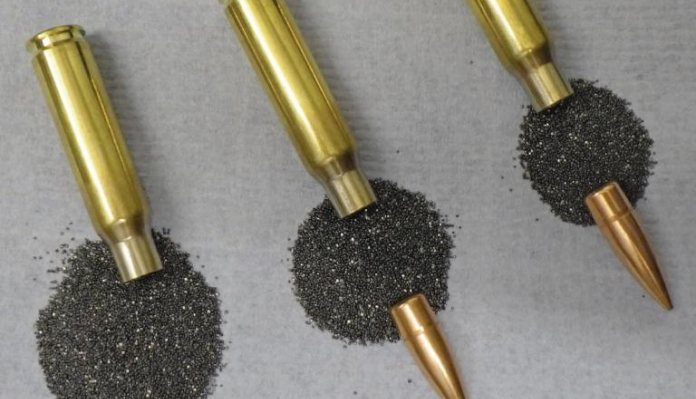 Load density is not often stated in reloading data so if you want to know what it is for your own loads then there can be bit of work involved.

If you have any reloading software then it will usually be able to calculate the load density for you, which saves you the time and effort. QuickLOAD for example gives you a figure, although they call it ‘Load Ratio’, after you enter the details of your reloading components and the weight of water that an empty case will hold.

The volume of powder you are using is easy to calculate as most powder manufacturers, and some reloading equipment manufacturers, provide details of the weight to volume factors of the various powders. Also, a lot of powder measures dispense by volume so most reloaders become familiar with working on powder charges in units of both volume and weight. It is of course important to remember that different powders have different densities, due to factors like grain size and shape and the composition of the powder itself, and you would need to calculate load densities for each of the powders you use.

The total volume available inside the case can be harder to actually calculate because it is the space behind the seated bullet. One method suggested is that you fill the case with water, seat a bullet, pull the bullet, weigh the amount of water left in the case and then convert that weight of water to a volume.

In practice it can be pretty difficult to fit a bullet into a case full of water. Seating the bullet attempts to pressurise the water, which is unable to escape from the case easily, and then removing it without losing any of the water is also difficult. If you do manage to seat and remove the bullet, and retain the water in the case, the conversion from weight to volume is pretty easy with one gram of water occupying one millilitre of space.

Fortunately you can often get the case volume from the manufacturers’ websites or from reloading manuals and then you just have to deduct the volume of the part of the bullet that will sit inside the case (you will have to get the calculator out for this bit unfortunately).

Rather than attempt to actually calculate the load density it is more often a case of using your judgment and actually looking to see how full the case looks. With practice you will learn to recognise a case that looks under or over filled and with a new load it is always worth weighing out the charge you intend to try, pouring it into the case, and making sure there is enough space to accommodate the bullet you are going to use. If the case is completely full to the mouth, or it looks like there is almost nothing in the case, then you probably need to rethink your load. Within the ‘normal’ and safe parameters given in load data the powder manufacturers will have considered load density and their published loads will generally fall well within the safe range.

A little too little

There have been numerous articles written on the subject of very low load density (light loads) and their potential to blow up your gun. The basis of all of these warnings seems to be that a very light load of powder will ‘detonate’ inside the case, rather than burn, and that this will be sufficient to damage or destroy the gun. The assumption is that this relatively tiny powder charge will ‘explode’ generating far more pressure than a larger amount of powder would generate by ‘burning’ in the same case. Many people have “heard of this happening” or “know someone it has happened to” but, as far as research has been able to establish, no one has been able to reproduce this effect or cause it to happen. When guns have exploded, and this light load theory has been put forward, there are far more logical explanations that could actually be the cause. An accidental double charge could have been dropped into the case during reloading, or a bullet fired from a light load could have got stuck in the barrel and then a second round could have been fired causing the gun to blow up. In both of these examples, subsequent examination of remaining rounds from the same batch would show that the powder charge is indeed light, but the conclusion that this has directly caused the explosion would be false.

A little too much

It is possible to create a load density in excess of 100% and this is what is referred to as a ‘compressed load’. The case is effectively completely full and when the bullet is seated it presses the powder into the case compressing it into the space behind the bullet.

Although some published reloading data does include some compressed loads they should be approached with extreme caution. Reputable bullet manufacturers publish data with load densities of around 103 to 107% but these loads have been very carefully worked up and they tend to come with warnings about watching for pressure signs. You should definitely not try to create your own compressed loads and even the published ones are probably best avoided. There are some very experienced shooters that do reload and shoot compressed loads without any issues, particularly in some wildcat calibres or in specialised guns, but for your average reloading enthusiast there is no need to go down this road at all.

Many years ago, when common sense was less well practiced, the author loaded up compressed loads in his Ruger Super Redhawk .44 magnum (a hugely overengineered gun that many consider ‘indestructible’). After firing just a couple of rounds the primers were blown out, causing the gun mechanism to jam, and an imprint of the pistol grips remained visible on the palm for several hours! Lesson learned, compressed loads were never again tried.

Popular opinion amongst experienced reloaders and powder manufacturers suggests that load densities around 80 to 100% are the most consistent and accurate. The theory behind this is that it promotes more consistent powder positioning in the case, ignition and rise in pressure behind the bullet. Consistency of course equals accuracy which is what we are looking for when reloading. Conversely, with very low load densities the powder charge can lie in all sorts of places within the case, depending on how the gun is handled and pointed, and this exposes a differing amount of surface area to the burn from the primer resulting in inconsistent ignition. When the case is properly filled there will be powder directly in front of the flash hole so that ignition starts immediately and progressively to give a more consistent burn and pressure curve.

Although load density is a critical factor in reloading, it is probably not one we need to get too hung up on as long as we stay within the ‘middle ground’ and avoid either end of the scale. While very low load density can cause issues like a bullet stuck in the barrel and inconsistent powder burning, the mythical ‘explosion’ attributed to such loads is yet to be proven.

Compressed loads, which basically involve pressurising a very volatile substance into a confined space, are unlikely to provide any tangible benefit in return for the associated risk and are best avoided. Keeping load density around the 80% to 100% range has proven to be the safest and most consistent approach and a visual inspection before you seat a bullet should be enough to confirm you are in the right ballpark. Most of the published load data includes powder charges that optimise load density so they have done the hard work for you, in respect of this aspect or reloading, and sticking with their data will keep you safe.