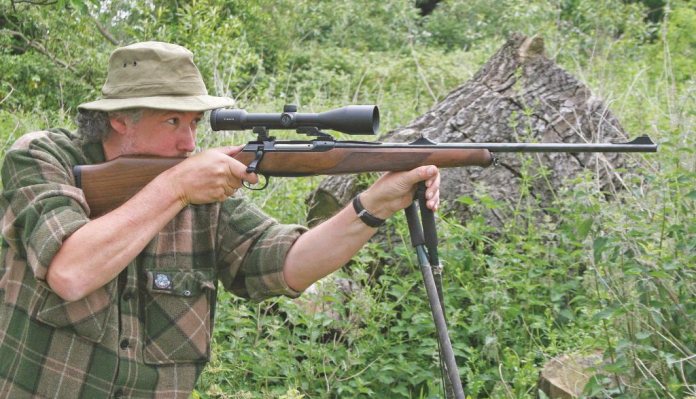 Metric cartridges have always interested me, but never really been on my radar, as the rifles chambered in them often are old or too expensive. Possibly the most popular metric in the UK is the good old 6.5x55mm Swedish. Though on paper not that powerful or fast, it will do everything from Muntjac to Reds and in Sweden is considered entry level for Moose, which has to tell you something! However, the more powerful 6.5x57mm, which in essence is a slightly longer 6.5x55 is an also ran, or not run at all!

The 6.5mm is an excellent bore size, with superb ballistic coefficients across all its bullet weights, which translates into excellent down range performance. Bullet choice is good; ranging from 85 up to 160-grain torpedoes. Regardless, so long as the rifling twist rate and barrel length is correct, then the 6.5x57mm is quite a performer.

Its larger brother, the 7x57mm Mauser is a superb calibre that refuses to die, due to its really good all-round performance! The 6.5x57mm was never adopted by any military, as was the 7mm Mauser, so the lack of military surplus ammo was never available to generate any real interest.

In Europe, it has been popular amongst hunters that require a cartridge that will ‘do it all’ for Fox, Roe, Red, Boar, Mouflon and Chamois, here the 6.5x57mm excels. It is also available as a rimmed case for double rifles, again popular on the continent but has not won enough hearts in Britain.

In general, 6.5x57mm cases have very thick necks and can withstand a bit more oomph, but neck tension can be an issue! Also, if you look at the data between the 6.5x55mm and 6.5x57mm, there is little to choose from it, despite the 57mm having the greater powder capacity. Which can be attributed to the skinnier profile of the 57’s case with a 0.468” base and 0.431” body at the shoulder and a shallower shoulder angle of 18°. The shorter 6.5x55mm by comparison with two grains less body has a greater shoulder angle that aids combustion. It also has a larger base and body diameter of 0.480 and 0.435” respectively.

Much like the 6mm PPC, has the effect of better internal combustion and therefore more efficient transfer of energy to the bullet! You could also really go to town on this 57mm case and Ackley it, as it is screaming out for it, as that thick neck gives you a lot of margin to custom size your rifle’s throat diameter for a superb precision fit.

I found the Sauer 202s with the interchangeable barrels to be excellent performers in this calibre but also Mauser, Blaser, Schultz & Larsen are equally good. I shot a Sauer 202 Classic in 6.5x57mm and had loads of data for it and tried lots of reloads, as I was so impressed and was going to make a wildcat from it at the time, which re-thinking it I probably will. The .20 Blitzkrieg will become a reality!

The Sauer sort of fits with the 6.5x57mm, as it is both elegant and understated yet performs when necessary. At the heart of the 202 Select is the all-steel action that combines strength and precise engineering, although if you are weight conscious, then an Alloy version is an option.

The barrel is retained by three cross bolts that transverses the front of the receiver and securely clamp it in place around its chamber end with the aid of a locating peg. It is not as fast a barrel change as say the Mauser or Blaser rifles but does offer a very tight, secure yet swift change option.

I went for a 24”, slim, sporter profile barrel with a 15mm diameter muzzle, needed for medium/slower burning powders to get good velocities. The twist rate is equally important, as all 6.5mm bullets need a faster rate due to their length to weight profile, making them very wind-slippery with high BCs. Although lighter weights down to 85-grains can be used, I would still check to see that the barrel has at least a 1 in 8” twist, as most people will shoot 100 to 140-grainers.

I fitted separate bases and scope rings and I opted for a set of Apel, swing-off mounts from Sentry Trading. These suited the Sauer perfectly, whilst offering a quick take down and exchange facility for any situation. So, you could double duty this rifle for vermin and boar, with a quick scope and bullet change. Apel swing off mounts require a degree of precise set up, which is no problem and thus set offer a return to zero scope change design. I fitted a Zeiss rail mount 7x50T scope, which complimented the classic Sauer`s styling and was in fact a cracking scope.

As you might expect; factory 6.5x57mm ammunition is not just falling off the shelves, but I did manage to obtain some RWS 127-grain ammo from Norman Clarks Gunsmith, this then gave me some brass to reload with. Norman also supplied a Redding Full length die set (#80228) and some Hornady Custom Grade came from Edgar Brothers, Hanmam`s Reloading and Norman again supplied bullets and powder/ primers, as well as Sierras from Henry Kranks.

Based on the venerable 7x57mm Mauser round, this 6.5mm calibre is really very good. Instantly you notice the lack of recoil from what is a good sized round compared to the performance you are achieving. This allows a good chance of spotting the shot and therefore allowing a speedy second shot if necessary. Muzzle blast is a little brisk though.

The Sauer is chambered long, so these short-truncated bullets means a reduced cartridge overall length (COL). However, a quick couple of turns in the bullet puller to length the COL and then re-seat to seat 50 thou off the lands shrank groups to 0.75- 0.80” and they still fed reliably in the magazine. I used this technique of pulling and re-seating a lot if the magazine will work OK, as with short factory ammo loaded to an average COL it often means bullets that are too far off the rifling lands are now much closer and certainly group better if you have no intention of reloading!

However, I do reload and so I took the shot brass and de-primed and uniformed the primer pocket and flash holes with a K & M tool set up. The necks too benefit from a good deburr on both inner and outer faces and the reloading dies proved perfect for the Sauer’s SAMMI- spec chamber; although a neck die set would be handy for altering tension if you want to thin or ‘tickle up’ the necks, as we say.

Reloading is easy and Quickload ballistic program and data from the factory ammo gave a good starting point for the bullets reloaded.

If you look at the data from the test gun, it can be seen the 6.5x57mm is a great performer and should really be recognised for its merits in this country. But because we have the 6.5x55mm Swede, 260 Rem and 6.5 Creedmoor now, the sales of the 6.5x57mm is still looking dim. It’s a shame, as it’s a very capable cartridge and one that I am going to play around with, as the 7x57mm AK Imp that Callum Ferguson re-barrelled for me is a superb performer and a wildcat based on this round would be the same.