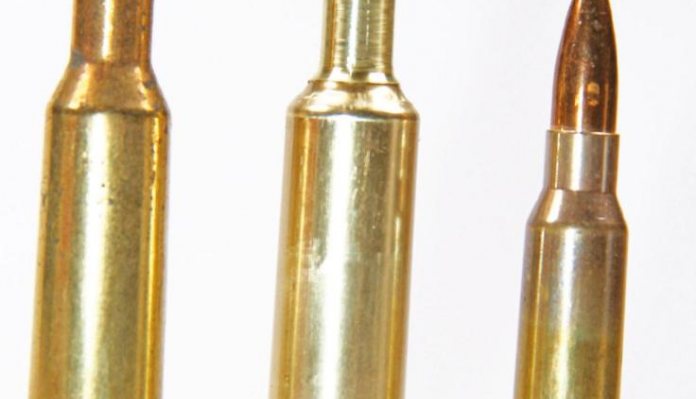 From one extreme to another. We move from last month’s examination of one of the most prolific commercial designs, the old 8x57mm JS or 8mm Mauser to a rare semi-wildcat. Semi wildcat, that does not sound right I hear you say. Well, technically it is, and although not commercially available, the cartridge in question has just made its first appearance in a mainstream handloading manual. The 10th Edition Hornady Manual providing a new degree of legitimacy.

Not guessed it? The cartridge is the 22-6mm Remington. An accurate birth date for this formidable performer is hard to establish, as several conflicting claims exist. But given the 1955 origins of its’ parent case, the 6mm Remington, it is likely that wildcatters had the first versions working during the same decade. Indeed, P.O. Ackley introduced an ‘Improved’ version during that period. The mixed units of the cartridge nomenclature are quite unusual too, but they do tell the story.

Based upon the 6mm Remington case, the neck was reduced to accommodate a .224” cal bullet. The original shoulder angle of 26⁰ and the overall case length of 2.233 inches were maintained. The highly unoriginal object of the developers was to break the 4000 fps barrier for a .22 cal cartridge. Best safe data saw a 55-grain pill with an impressive muzzle velocity of around 3900 fps. They did get 4000 fps plus from lighter pills, but the resulting barrel life was somewhat limited! Which is a side product of this number you just have to live with, as it is what it is! By any standards this is a hot round. A tour of SAAMI failed to reveal a listing for the calibre, leaving chamber dimensions and pressure details to be imagineered!

To my knowledge no commercial rifle maker has listed the calibre as a ‘standard’ offering. However, a brief cruise through the Interweb revealed a surprising number of custom chamberings, many based around Savage and Remington platforms. Whilst no-one lists ammo for the 22-6mm Remington, those who like all manner of cartridge conversion tasks are fully serviced with no need to reform brass from the original.

Midway USA offer Quality Cartridge Co ‘Qual-Cart’® brass at around £3.00 each. Dies are a Hornady standard calibre offering or available as a custom build from Redding and RCBS. Consumables are of course, available in a multitude of options. With no personal experience of reloading this calibre I can only guess at the considerations. My biggest concern would be the dimensional relationship between the dies and the ‘custom’ cut chamber! The resulting issue of case life will be compounded by the monster internal ballistics, especially if you’re exploiting the full potential of the design. And of course, how long that rifling is going to last. I would guess an Ackley version would be worse and I know that’s done to the original 6mm Remington.

As for an application, well the incredibly flat, long range performance with middleweight pills would appear to offer both varmint and target shooting potential. As for hunting, well the calibre limit kicks in for almost everything except for the odd Chinese Water Deer or Muntjac found patrolling the horizon! As a novel topic in the bar of the local Fox and Flowerpot it has virtue but for practical purposes I can think of many better choices. My thanks to Bruce Potts for supplying the image.