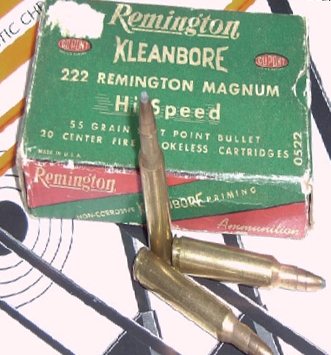 It all started around 1955 when the US Army decided to commence trials to evaluate a sub-calibre service rifle and cartridge. The main players in the race for glory were Winchester and Remington. Of the rifle makers, Armalite came to the party with their reworked Model AR-10 chambered for the Remington .222 cartridge. That combination failed to meet the performance criteria, so they asked Remington to create a hotter, stretched version with a longer body and shorter neck that could still be chambered in their design – it was originally named the .222 Special. Another competitor, Winchester faced the same challenge, independently coming up with the near identical .224 Winchester E2 cartridge for their contender, the Light Weight Military Rifle.

Fellow rifle competitor Springfield had more chamber space to play with and charged Remington with the development of a measurably longer variant, originally named the .224 Springfield. This number was to become the .222 Remington Magnum (this month’s subject) following the withdrawal of Springfield from the arms race! And the winner? Well, the .222 Special became the civilian .223 Remington and the subtly different NATO 5.56 x 45mm…. both tracing their official birth date to 1958/9.

The rimless bottleneck .222 Remington Magnum case is often described as a child of the .222 Remington. Yes, it shares the same head and primary body dimensions but as it requires MORE brass than the stock .222 Rem it cannot be a reworked. The evaluation prototypes for Springfield set the performance parameters for the commercial Remington product. Their first Kleanbore (the priming material) offering having a 55-grain soft point pill that delivered a claimed 3240 fps from a 24” barrel. Keen observers will note that this is near identical to the performance of the higher pressure .223 Rem cartridge. And that’s the reason why the .222 Rem Mag has faded into semi-obscurity.

The economies of scale and the availability of cheap .223/5.56 ball ammo, made the outcome inevitable. As for application, it is a comparable performer to the .223 Rem and outperformed by Winchesters .220 Swift as well as the later Remington .22-250. All offering excellent low cross-wind accuracy at up to 300 metres on varmints and small game up to, but not including deer.

Over the half century or so, there have only been a handful of commercial rifle chamberings from Remington, Cooper and Sako and none are currently listed. Volume production of commercial ammo ceased some time ago but at least one of the American ‘specialist’ rare calibre makers still lists it. As for handloading, small rifle primers, propellants, and (unsurprisingly) bullets are all stock items. Brass is listed on the Interweb and data appears in most manuals. RCBS, Redding, Hornady, Forster and others list the necessary tools.

However, unless you already own a suitably chambered rifle, I would suggest that the calibre is little more than a curio. But that’s not the end of the .222 Rem Mag story. Outmoded it may be, but since 2004 it has parental responsibilities! As we shall see next month, it has donated its body to the .204 Ruger, the product.