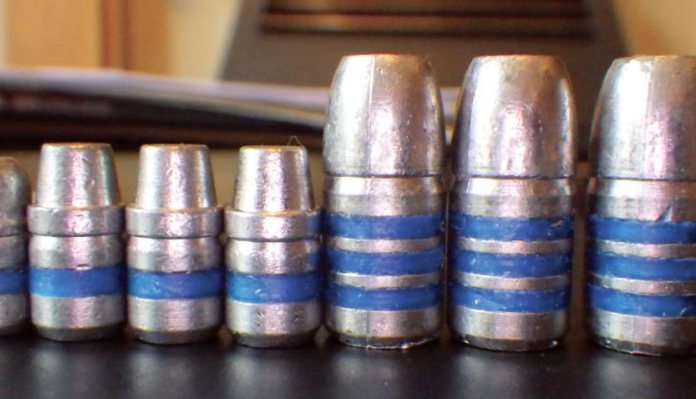 GM Hardcast Bullets have been manufacturing bullets here in the UK for around 25 years, producing high-quality cast projectiles in a range of calibres, types and weights.

Their alloy ‘recipe’ is a closely guarded secret, but it produces truly hard bullets ideal for most shooting applications. For the purposes of this review .38/.357 bullets in 148-grain wadcutter, 158-grain semi wadcutter and 158-grain round nose flat point were tested along with the 405-grain round nosed flat point bullet in 45-70 calibre.

Whats in the box

The .38/.357 bullets come in boxes of five hundred and the 45-70 in boxes of 100. Tightly packed in strong cardboard boxes, the bullets cannot move around so they do not get damaged in transit. On close inspection none of the boxes of bullets under review contained any damaged bullets, testament to both the quality of the packaging and the hardness of the bullets.

All GM bullets come twicelubed with a hard, waxy lube in the grooves and an all-over coating with a second clear lube. There were no empty lube grooves on the samples that were tested and there was no excessive lube visible anywhere on the bullets.

As the name suggests, these bullets are indeed ‘hardcast’, and testing using the Lee Lead Hardness Test Kit showed them to be approximately 16.6 BHN, which is at the high-end for a lead alloy hardness. This makes them suitable for most applications and they would withstand all but the top-end magnum velocities in the appropriate calibre. The bullets are very well-made and the lines from where the two halves of the moulds meet are not obvious. The bullets are all well-formed and there were no part-formed or deformed bullets in the boxes.

A sample of each bullet type was checked for weight and diameter and the results were very consistent. All diameters were as shown on the box, with the exception of the full wad cutters which actually measured .357, and weights were generally within just under a half of one percent of each other. The weights were all very slightly higher than stated on the box, the difference being the weight of the lube, and the consistency was truly impressive.

All of the bullet types tested showed a bevelled base making them easy to sit into the case mouths when reloading. They also aligned well, and so seating was a piece of cake. The bullets all have a crimp grove with a bevelled face so that the case can be properly crimped in. Being so cleanly lubricated the bullets are easy to handle and load and you do not end up with any lube on your hands or your reloading equipment.

How do they shoot?

The Semi wadcutter and round nosed flat point bullets were tested in the Marlin underlever and both functioned without any issues. Accuracy and grouping was good with no ‘fliers’ and there was no sign of much leading in the barrel.

The wadcutters were put through a Taurus LBR and again accuracy was good and consistent. There is a common view that harder lead bullets shot at lower velocities do not obturate properly in the barrel and cause problems with leading. There was no evidence of this using the GM bullets at velocities around 800fps and they proved very accurate, (Bullet fit in the barrel is far more likely to account for any excessive leading issues rather than bullet hardness).

The 45-70 bullets were tested via a Chiappa 1886 and they are extremely accurate, shooting very consistently and feeding faultlessly. These bullets have a longer ogive than any other bullets I have tried in this calibre, so you do have to watch the Cartridge Overall Length of your reloads and seat them correctly. You can simply wind out the adjusting screw on your bullet seating die and then, using the crimp groove on the bullets as a guide, screw it down until the bullet is correctly seated and the case mouth sits at the crimp groove. Although I have not had the opportunity to test these bullets at 100-metres plus, I expect their enhanced aerodynamic shape will make them more accurate at longer ranges than shorter ‘fatter’ alternatives.

The GM Hardcast bullets are great quality and the consistency is very impressive, even surprising, for a mass-produced product. It is good to open a box of bullets and find them all to be in top condition with no rejects.

All of the bullets tested performed very well and they are my go-to lead bullet brand. The .38/.357s are very reasonably priced and represent great value for money. The 45-70s are expensive, and for that reason I do cast my own bullets in this calibre when time permits, but I have the GM bullets on my reloading bench as a fall back (they are also far more accurate than my home-cast bullets!).

With Kranks being able to offer postage on these items for only £4.00 (up to 30kg) it is possible to get them delivered to your door without much additional cost.