Non Lead Ammunition Round Up - Part 1 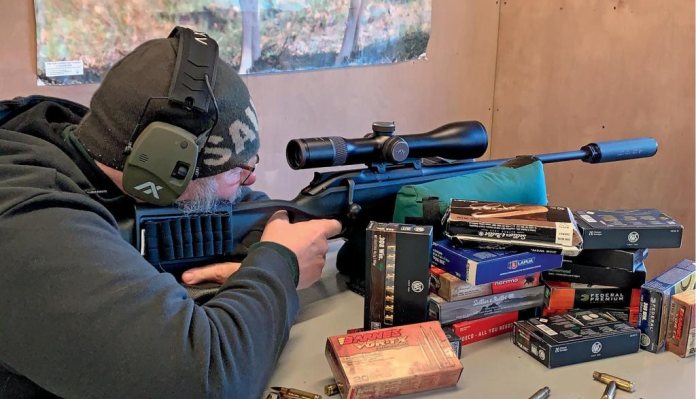 It is coming and there seems no way of stopping it! I’m talking about the banning of lead-cored hunting ammunition. We have already seen this on shotgun shells for wildfowling in the UK, with alternative materials such as tin, steel, zinc, and Bismuth, which offer their own problems and solutions in terms of ballistics, cost and wear and tear on guns. It looks like in the next five years, this prohibition could extend to all land-based flying game. We have already seen the decline of plastic wads in favour of the biodegradable felt types, which also have pros and cons.

With this in mind, we turn our attention to hunting, as there has been an upsurge over the last few years in a feeling that lead-cored rifle ammunition also represents an environmental threat. This is identical to the shotgun shell argument, with thoughts on land and meat contamination, with the solution, as always, a ban! I apologize if you think me bigoted, but I think whatever we do will not appease the antis, as they see us as outside the pale and this upsurge in more environmental thinking is an ideal stick to beat us with!

Non-lead rifle ammo has been around for a long time, although the concept was different. Its main use, with big bore, solid copper and brass bullets was for large game hunting, where you needed a big, heavy, and tough bullet to get deep penetration and smash through bone etc. and break the animal down. However, the real meaning is more recent. The dream is an alternative bullet material that hopefully will perform like the old leadcored designs. But as we shall see this is a work in progress.

So, let us consider how hunting bullets work. For UK use, they must be expanding, meaning when they hit, the nose section will either increase in size, fragment or both. These effects contribute to that essential fast and lethal kill. Factors like weight, construction and methods of expansion initiation will affect things like trajectory, speed, energy, internal barrel pressures and even accuracy. Features that most modern lead-cored ammo already offers to suit all ground game species worldwide.

Getting the lead out

Regardless of how individual bullet styles initiate expansion, the one common factor is lead (Pb). This heavy, dense, yet soft, core material is near ideal, hence it has not changed since practical firearms first appeared. So, it matters not; if the projectile was a simple round ball powered by black powder, or a modern, jacketed bullet doing 3000 FPS+ with modern smokeless powder. So, removing it from this equation requires some serious thinking.

I sourced 16-types/weights of non-lead hunting ammo that represents most of today’s manufacturers. Although, primarily a lead-cored guy, I have both tested and hunted with some of the alternatives with mixed results. My research has shown that there are two distinct types of bullet, one being more prolific than the other. I call them the hammer and the hand grenade!

The most common are those based on the generic Barnes Bullet’s design. Technically described as monolithic hollow points, the projectile is drawn from a single slug of copper alloy with a long, hollow point cavity in the nose section (ogive). Here, the ogive features, vertical, pre-cut stress lines that when it hits, peel back into four, sharp petals.

Such is the construction, that in most cases these stay attached to the main body. This transformation also doubles as expansion and the result is near full retention of bullet mass with what can only be described as a wicked piece of metal steaming through the animal causing massive amounts of damage. It also fulfils another requirement of a good hunting bullet as the majority, if not all this mass, will fully pass through. As a result, the animal will leave a good blood trail to follow.

The build is less flexible than lead-cored types, so bore pressures might rise. To combat this, most have a series of circumferential cut-outs (cannelures) around the body. Equally, they can be encountered in flat or boat tail base configurations and in most cases now have a ballistic tip for a better ballistic coefficient (BC) and more improved initiation. Barnes supply bullets for reloading, as well as ammunition, and other manufacturers also use their products as well as their own. For example: Hornady – GMX and TNT, Sako - Hammerhead, Federal - Copper, Lapua – Naturalis, RWS – HIT and EVO GREEN, Sellier & Bellot – Blue and eXenergy, Geco – Star and Norma – ECO STRIKE.

Pull out the pin

Different and less prolific are the twin-core types. Here the material is not a solid mass, instead, either with integral apertures (sort of predetermined weak points) or made of tiny pieces formed under pressure (sintered). They tend to use tin for both front and rear cores and jacket. A good example is RWS’ EVO GREEN ballistic tip. The ogive’s mass features internal voids, that as it hits and penetrates breaks up into sub-missile swarms that track through the body causing massive damage. This, according to a guy from GECO (RWS subsidiary), is what does the killing!

Meanwhile, the rear core section is more robust and having separated from the ogive stays in one piece and provides the pass-through, while at the same time doing more damage as it does. Generally, the bullet is lighter for calibre, with a significant increase in velocity. For example, in 8x57IS (8mm Mauser) it is a mere 139-grains and approaching 3000 FPS. Normally, this would be pushing 200-grain pills at a more modest 2450 FPS, with a more curved trajectory. From my experience, the EVO GREEN gives excellent performance with no more peripheral tissue damage than a conventional lead-cored design.

Hornady also offers a sintered tin version in their NTX, .17HMR rimfire ammo. Interestingly, the weight is 15.5-grains instead of the more common 17-grain, lead-cored V-MAX-projectile. Speed is about the same, probably due to keeping bore pressures lower on the harder core material. Accurate, yes, but in use; rabbits will run on after a good body shot, that if taken with the 17-grain lead-cored V-MAX would have put them down on the spot. Head shots; no problem! NTX is also available for .223 Rem and similar cartridges.

So far, non-lead is not looking too bad and I would agree. I primarily use it for driven boar in the shape of a .338” Barnes TSX 185-grain reload that I use in my Mauser M03 chambered in 8.5x63mm REB.

Running around 2760 FPS, it generates nearly 3000 ft/lbs of energy and really slam dunks those pigs if I do my bit. Equally, I have dropped a few large and small deer with the RWS EVO .308 Win load with its 136-grain pill and Hornady’s 150 and 165-grain GMX too.

However, as I found in the past, rifles can be fussy and some guns just do not like non-lead! Also, and unlike lead-cored fodder, the hammer-types can be more velocity-sensitive, as fully opening the petals requires high speed and as the range increases it is not always there. Equally, the hand grenade types lighter bullets can suffer too. Some show quite short MRD figures (maximum recommended distance) by comparison.

About three years ago, I was shown a section of a report from a German forester’s group who changed to non-lead for a year. I will not say what they were using, but apparently, results were disappointing, with more animals running on and being wounded. The conclusion was not fit for purpose. I too have seen this first-hand, and when you see a Red take a bullet behind the shoulder, which is the classic kill shot, and run off after the herd, it is very worrying!

However, and from other experience, I would say that the gap is closing between the traditional and newer, non-lead types, certainly with the more modern products I have been looking at recently. The latter types of bullets are also available from some manufacturers for reloading. Nosler offers their E-Tip, Hornady the GMX and of course Barnes with a wider range of options. Also, some rifle manufacturers are starting to make their barrels expressly suited to these new products.

I am going to wind it up here, as I hope you have got the basic idea of what the subject is about. Some might see it as an unwarranted intrusion into what we do and to a degree, I would agree. But it is likely to become the law in the not-toodistant future, so we will all have to conform, and it is better to get our heads around it now and see how we can make it work, rather than ignoring the problem (if it is one) and burying our heads in the sand and being forced into it, or out of it, if we do not comply!

My thanks to all who contributed ammunition and information: