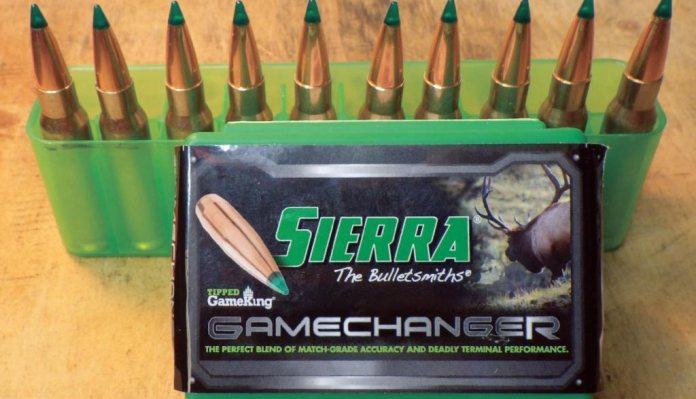 Sierra have always been at the forefront of bullet design and the accuracy of their match bullets is unquestionable. Their range of hunting projectiles has also established itself as the go-to product for most game shooting. It was inevitable that these two lines would eventually merge and the outcome is what we have here, the Sierra GameChanger Bullet, one of the most interesting looking bullets that has emerged in a long time.

Based on the MatchKing bullet design, Sierra have taken their best match bullet, added a hollow point behind a new synthetic tip and re-engineered the jacket design to optimise both accuracy and performance on impact. The usual accuracy-optimising features, like a boat tail and a tuned ogive, are combined with the new tip to give the bullet an exceptional ballistic coefficient (0.530 in the .30-calibre bullet). The bullets are also very long, compared to a similar bullet of the same weight, and the increased surface area in contact with the rifling helps to optimise aero ballistic flight and accuracy.

Although Sierra have not published anything specific for the GameChanger range, there is plenty of reloading data available for bullets of the same weights, which can be used with care. Consideration needs to be given to the length of the GameChanger bullets, and the effect on the Cartridge Overall Length (COL), as you will be seating the bullet deeper into the case to accommodate it while still keeping the COL within the limits of your gun. I use Ramshot powders and the Ballistic Technicians at Sierra supplied the following data for the .308 calibre 165-grain GameChanger:

I loaded the bullets into new Lapua .308 Winchester Cases, with CCI large rifle primers and 41.0-grains of Ramshot TAC powder. When seating the bullets, care needs to be taken to avoid damaging the synthetic tip; so, check that your bullet seater only touches the ogive of the bullet and not the tip. I also inputted the data that Sierra supplied, along with the data for my own rifle and cases, into the QuickLOAD ballistic programme and the velocity and pressure came out well within the safe limits.

From a 26-inch barrel, shooting at approximately 100-yards in far from ideal conditions, the bullets consistently grouped within around an inch. Testing was rather limited due to the rain and wind, but it was obvious that these bullets were capable of super accuracy. What was also very apparent was the amount of damage these bullets deliver on impact. The inch think scaffold board that the targets were fixed too was devastated by the bullets as they passed through it. Four-pint plastic containers full of water were blown apart when shot with no significant pieces left to assess.

The Sierra GameChanger is a very highquality bullet, technologically perfected to optimise accuracy and designed to expand instantly and effectively. They give anyone stalking game the opportunity to utilise bullets with match grade accuracy and good terminal performance. Although I have not been able to test these bullets on game, there are numerous videos on the internet showing just how effective they are. Although relatively expensive, these are not bullets that you are going to be using in large numbers; think quality over quantity and be safe in the knowledge that you are using a very effective bullet. They are also the best-looking bullets I have ever seen!