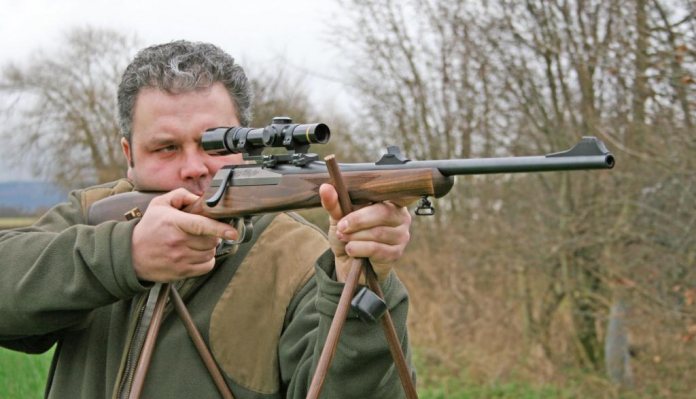 The thirty calibre has endured for centuries now, it seems to encapsulate all that is necessary for shooting a wide range of game species and none more so than the elderly statesman; the .30-06 Springfield or 7.62 x 63mm, as our European cousins call it. Originally starting life, as so many great cartridges in history, as a military round, in fact a modified version of the 1903 called the .30-03. Firing a big and heavy 220-grain bullet it was far from ideal and had problems with bore erosion. The improvement was to shorten the .30-03 case by 0.007” and straightened the side walls, thus increasing the velocity of a 150-grain bullet from 2,300 fps to 2,700 fps.

The military were suitably impressed, and it was adopted in 1906, this ensured its success and inevitably endeared it to many hunters in the USA. In view of this, the 30-06 still remains one of the most popular thirty calibres with all rifle manufacturers and thus the availability worldwide of ammunition or reloading supplies is extensive. Its rimless design has a classic, slender bottle neck configuration with a maximum length of 2.494” (63mm) and a 17º, 30 minute shoulder angle. Although you can use old military brass to reload, so long as it is boxer-primed, it is best to use commercial makes that offer a more uniform internal capacity.

All these have their own unique appeal and in terms of ‘enough gun’ it offers a worldwide game capability. It will do all British deer species and, when loaded properly, vermin and foxes also. Couple to this its good accuracy and versatility larger species such as Elk, wild boar and African plains game are not outside its grasp. Some say, if they had to just have one calibre, it would be the 30-06 and I tend to agree with that thought process.

Typically, the rifling twist rate is 1 in 10” and so the heavier 220-grain bullets are stabilised correctly, and the pitch is not too fast as to cause pressure issues with the lighter, faster types. One of the key reasons it remains so popular is the .30” calibre range of bullets it can handle efficiently. Any weight from 110 to 220-grains can be utilised, which offers the shooter the ability not only to engage a diverse range of game as mentioned, but also to fine tune a load with almost endless possibilities to suit your individual rifle’s preference.

From the lower end of the spectrum and not the big thirty’s initial intent, but one it performs admirably, is when light, frangible bullets are used as fox and vermin loads. The 110 and 120-grainers excel here, giving a blend of high velocity, flat trajectory and impressively effective terminal ballistics. Where the heavier bullet weights benefit the shooter is their better wind bucking abilities than the normal smaller calibre rifles. Also true is they can make good deer loads with proper bullet placement, but some may argue that excessive venison damage may sway you towards the heavier projectiles.

This said, then some of the 130 -150-grain soft point or bonded core bullets may prove a better bet for deer, giving more controlled expansion, yet still shooting flat enough for normal ranges. However, it excels with the heavier end of the 30 calibre bullet spectrum and those from 165 to 220-grains are good examples. Dependent on style, they can deliver higher ballistic coefficients than the lighter weights and so retain energy down range far better and buck the wind well.

I have shot many a big thirty in my time, ranging from an old Tikka double rifle, a very fine Merkel KR1, Ruger No 1 and new Ruger American, as well as many custom rifles. There are many factory loadings on the market if you are reluctant to reload. I really like these loads from a 24” Ruger American rifle (see Factory Fodder table below).

For reloads, I prepped up 50 Lapua cases, which offer superb quality brass and are worth the money and gives any home rolled ammo a good starting point. Also, a Lee die set, although cheap, turns out a good quality product at a reasonable price. Going further if you like to exchange neck bushes for a finer tolerance reload, then Redding or Wilson make excellent dies of this sort. As usual, I ran all my makings through Quickload Ballistic program to check I was on the right track and it also saves time and money.

Starting with the lighter bullets, the 110-grain Hornady V-MAX is superb as a fox bullet. With a load of 58-grains of Varget powder ignited by a CCI 250 primer that little pill was travelling at 3391 fps from a 24” barrel and generates 2809 ft/lbs of energy. That’s plenty fast enough for any fox.

Upping the weight to a 125-grain Nosler Ballistic Tip and changing the load to 52.5 grains of Vit N140 but with the same primer, gives 3128 fps/2716 ft/ lbs. Another great load both for deer or fox depending on your preference. If you are a bit worried about meat damage, then a load of 46-grains of the same powder gives a more sedate 2677 fps/1990 ft/lbs with less explosive bullet expansion, your choice. I have achieved higher velocities with Reloder 15 powder but found later that this rifle likes Vit N140 better.

The 130 grain is a nice compromise and I like Speer Flat nose soft points in this weight. Yes, they have a blunt nose and thus lower ballistic coefficient than a spire point, but at normal deer ranges, travelling at 2947 fps for 2508 ft/lbs expands well and delivers a good amount of initial terminal shock. Similarly, Hornady’s 130-grain spire point can be substituted with this loading if your rifle is more accurate with this make and type. Another really good 130- grain is the Barnes TSX, I use in my 30-47L and from a 30-06 penetrates and expands well.

The 150-grain bullets are next, and a good range of styles are available, dependent on your application. I used the Hornady SST, this has a polymer tip combined with an interlock lead core and when loaded to 2881 fps/2765ft/lbs using 52-grains of Reloader 15 powder gives good results. Another good load with Hornady Interbonds or Nosler Ballistic Tips, is 56-grains of Reloader 17 powder for 2814 fps/2638 ft/lbs. Better balanced for the 30-06 are the 165- grainers where Ballistic Tips, Partitions and Inter Bond bullets stand out. The Nosler Partitions generating 2710 fps and sub-1” groups at 100 yards with 58-grains of Vit N160 powder.

As the bullet weights increase, the powder burn rate slows accordingly and 180-grainers such as the Sierra Pro Hunter or Game King exhibit good velocities with powders like Reloder 19, H4831SC or Reloder 22. The Sierra Game King with a load of 58-grains of Reloder 22 powder is deemed classic for the ’06 and gives the hunter 2727 fps/2973 ft/lbs to play with.

The last loads are for the heavier 200 and 220-grains, although there are some specialist heavier weights too. The Nosler Partition stands out here as a very competent design and perfectly matched to the .30-06 case capacity. Velocities in the region of 2650 and 2550 fps from the 200 and 220 grain bullets respectively delivering a healthy 3119 and 3177 ft/lbs accordingly, enough for the heaviest stag or antelope. Barnes’ 180-grain TTSX (ballistic tip) is another good all round performer and 51.5gr IMR 4007 SSC powder achieves 2537 fps/2573 ft/lbs. A good load with the 220-grain Partition is 56.5-grains of Reloder 22 that delivers 2579 fps/3250 ft/lbs, although 54-grains of Vit N160 was more accurate.

Being quite honest, the .30-06, despite its age, as with so many other good cartridges, stays the distance purely because the developers got it right the first time. Yes, the long case is a bit old fashion these days, with ever increasingly short squat designs rearing their heads, but the big thirty still stands tall. Recoil is really not too bad at all and could be conceived as a ‘non magnum’, magnum. and as I said a great all-rounder on any of our species and the bigger and tougher animals the wider world has to offer.

The fact that so many rifles are produced and owned by satisfied sportspersons world wide means the .30-06 buyer has a great choice of rifle design to suit any tastes and there will always be a good variety of factory ammunition and reloading components.