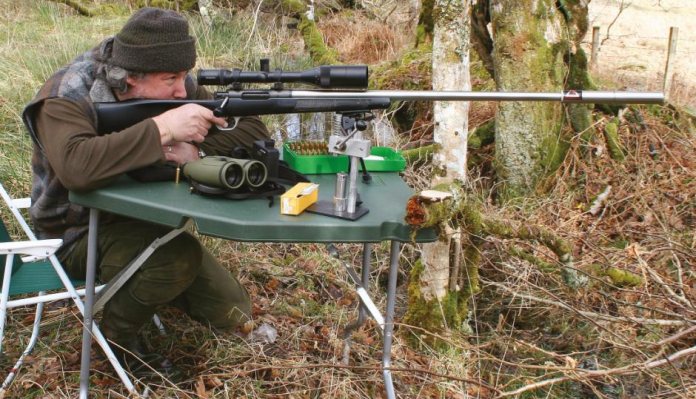 Smoother than a creamy yogurt on a super model’s nose, the 6X47mm Swiss Match round is one of those forgotten calibres that actually has influenced a lot of the modern, short, efficient cartridges of today. Made by RUAG Ammotec of Switzerland at the time, it was designed to be the Swiss champion’s shooting cartridge for 300 meter Matches.

It combines an efficient case with high Ballistic Coefficient (BC) 6mm bullets that are highly accurate, wind slippery and do not recoil too much and also achieves a longer barrel life for sustained accuracy. Because few guns were ever chambered in the 6x47mm, it was really a semi-wildcat or custom option from the start, although RUAG did load some excellent ammunition for this round and supply quality brass too.

I based my .20 and .22 Satan Mark 1 wildcats on this case nearly 20 years ago now, the Mark 2 version is based on the 6.5x47mm Lapua cartridge. You don`t hear much about the 6x47 Swiss Match anymore but look how the 6.5 and 6mm Creedmoor have taken off, coincidence, I don’t think so?

Then people thought, ‘oh, a bit more power would be nice!’, but not as much as the 243 Winchester sized load and like all Wildcats tends to grow beyond their intended purpose. The Swiss Match however, like the Tubbs, XC etc. all have that `sensible` sized case capacity for an efficient powder burn ratio. Even the 6mm Dasher, which is about as improved a 6mm BR case as you can go, with a trim length of 1.540” and H2O capacity of 41-grains is still short of this little Swiss number.

The idea was to have a super-efficient, high BC 6mm bullet of 105-grains traveling at 3000 fps velocity, excellent for 300 metre use and actually far beyond, as we all know now. Rather than a 243 Winchester parent case, it’s more like a .22-250 Remington, but slightly longer at 1.850” and the body has those characteristic, minimal, tapered sides for maximum powder capacity.

You have a shoulder angle of 30º and a neck length of 0.748”, which is nice and long for supporting the heavier bullets that need to be seated out further to gain maximum powder capacity. Although this means throating the chamber further out and so lighter bullets, seated shorter have further to initially engage the rifling. Also, the neck wall thickness is 0.01300” per side and a case weight of 159.8-grains, which is more than the larger 6mm Creedmoor at 154-grains, so the Swiss Match brass is thicker and stronger.

The H20 capacity of the Swiss Match is 46.6-grains, dependent on bullets seating depth and to gain the maximum here it is customary for rifles chambered in this calibre to have long throats. Yet, it still maintains good neck support and tension. By comparison, the 6XC has a 49.7-grain water volume, the 6mm Creedmoor is 52.6-grains H20 and the 6mm Lapua is 47-grains. Going up a notch, is the 6mm Rem Improved, but that gets away from a shorter case design and then you might as well go all out and get a 6mm -284.

One other thing to mention, is the amazing quality of Swiss Match brass, it`s one of the reasons I used it for my Satan wildcat development. Not only are the cases incredibly consistent in weight, but dimensionally they are flawless with machined not punched primer pockets and holes for a clean burn without any burrs. This really does increase your chances of loading a really good, accurate round.

Annoyingly, I had run out of my stock of 115-grain Berger VLD Hunting bullets, which would have been nice to try out on some distant vermin. But overall, the RPA Quadlite I used had no real favourite loads. In fact, light or heavy and, despite the big difference in COAL and long throat, this rifle shot well with all the bullets making it a great choice for vermin and/or deer.

That’s why the aforementioned modern 6mms are so popular, as they offer great accuracy potential and versatility. Plus, burning minimal powder, so more barrel life, less recoil and easily moderated. You have a huge choice of bullet styles and weights to choose from, although many were meant for target work.

Being part of the RPA switch barrel rifl e system, I use for testing wildcats, it’s easy to select the right tube for the job. In this case it was a 28”, cut rifl ed, Krieger stainless steel unit with 5-groove rifl ing with a 5/8th muzzle thread for a moderator. It is throated for longer 105-grain bullets, as per original spec for this round and has a heavy custom profi le to maximise harmonics.

With the RPA Quadlite, I have a few stocks; my favourite is the McMillan, Lazzeroni-style thumbhole, no surprises but the A5 or Sako Varmint stocks also make for a nice variation for fi eld use, depending on whether it is for deer or vermin. That 28” barrel plus moddy is bloody long for stalking, so a sit and wait policy off a bipod or sticks is preferred. I had some old loading data from a friend to start me off, but it is also on Quickload, so makes life easier to work things up and then see how they work in real life.

The best lighter bullet load came from Berger’s, 68-grain, fl at based hollow points that produced literally one hole groups at 100 yards. Best powder choice here was 40-grains of Swiss RS50, appropriately, that produced 3531 fps/1882 ft/lbs, a fl at shooting pill for all occasions. A nice mid range weight for deer would be Nosler’s 90-grain Ballistic Tip (BT) although the same weight E-Tip non lead was a bit inconsistent. The BT shot sub 0.35”, 3-shot groups with a charge of 37-grains of RS50 for 3158 fps/1993 ft/lbs. I have been using more and more of the Swiss recently since the lack of certain American brands and found it consistent and well-priced too.

For long range work, then either the new Nosler RDF or Berger VLD hunting bullets worked extremely well, both at 105-grains. The Berger preferring Alliant RL15 and 36.5-grains produced 3072 fps/2201ft/ lbs, not the max load but most accurate. The RDFs have an extremely high BC and fl ew along with a load of either RS62 or RL19 for consistent 3000 fps + velocities and hits at quite amazing ranges.

Yes, another commercial type wildcat that people will say, ‘why bother with, when you have the 6mm Creedmoor and 6x47L?’ But and as always, unless you try it, how do you know what’s best? I like it, as it has all the power you need for long range work, deer and vermin with the correct bullets. It has impeccable reloading manners and I like the longer neck stability on the SM case, as compared to the other 6mm options.

Next is the 6mm Creedmoor, so it will be nice to see how this performs.