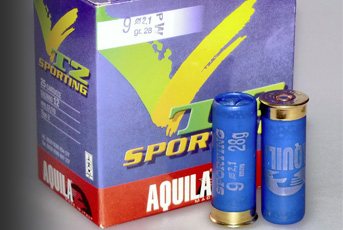 For most shooters the Cheddite name is more usually associated with the cartridge componentry many of the leading manufacturers use in their top of the range ammo. However, courtesy importers of York Guns, Cheddite’s own range of Italian manufactured Aquila T2 Sporting cartridges have now been available here in the UK for quite a few months. But like their components, Cheddite haven’t been slow in improving their product, the second generation of their already impressive shells are now available, 21, 24 and 28 gram along with plas and fibrewads and all shot sizes now in the range.

Visually nothing has changed, the T2’s still presented in their customary colourful box, just the small white panel on the upper left corner identifying the shot size and wadding contained within. In this instance it was the slightly more skeet orientated 28gram plaswad 9’s, perfect for the discipline and ideal for close – range sporting targets. An exact 57mm in length inclusive of the short 8mm brass, each blue plastic case is closed with a neatly rolled six-point crimp.

Internally, 441 or 28-23 grams of well formed shot sits in the cup on top of a deep, honeycombed cushion in turn positioned over 1-41 grams of pink, square cut propellant. But it’s through the chronograph that the most significant difference is seen. Producing a consistent mean average of 1,243fps over two batches of five shot strings the new generation T2’s were a minimum of 73fps faster than their predecessors, more than sufficient appeal to those seeking true high-speed ammunition.

At The Pattern Plate

Patterning at thirty yards through ¼ choke resulted in a pellet count of 80%. Probably slightly farther than many would utilise a load of 9’s, a further 7% can be added if the immediate ‘flyers’ are taken into account, many of these an inch or so outside the 30” circle.

Around the layouts these enhanced physical properties definitely make their presence felt. Kill are noticeably quicker along with the attendant cleanliness, the overall effect of Cheddite’s upgrades having been to produce a more efficient, crisper cartridge although for many sporting targets the slightly larger 7½’s and 8’s would probably be the load of choice. That said the 9’s as tested more than did the business at thirty yards. The downside is that there is more felt recoil, the shooter experiencing a sharp, snappy sensation, users of lightweight 12 bores finding them tiring after a short period of time.

However, the overall effect of the second generation Aquila T2’s is more than worth this marginal negative, the overall performance seeing these redesigned loads generate performance the equal of any well known mid-priced load. Similarly, whilst being able to match on paper, as well as on the range, many of the current high end competition cartridges, shooters looking to combine a degree of cost saving - whilst still maintaining speed and efficiency - will more than appreciate the price per thousand of the new Aquila T2. Add to this the full range of shot, load size and wadding, the whole combining to produce a selection of cartridges we look forward to evaluating over the coming months.