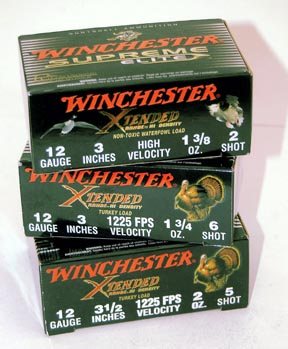 Before I go any further with this ammunition review, I’ll get the shock over with first. Winchester’s latest range of non-toxic ammo costs £32-50p per box of ten. What I would now urge you to do is read on, because once you’ve looked beyond the wallet wilting purchase price what you have is a genuine American made cartridge that, in larger shot form, rates as one of the most powerful and consistent loads I’ve experienced to date.

What you have to understand is that in certain parts of the US, a day’s bag limit can be no more than one or two duck, geese or turkeys. To that end, if you’ve travelled miles and spent numerous uncomfortable hours in a blind, you’d be of a mind to make sure that you hit what you’d set out to shoot. Hence a box of shells will last a good ‘ol boy four or five outings, the Supreme Elite Xtended Non – Toxic making perfect financial sense. Once you’ve tried them yourself, they may make sense to the UK wildfowler too.

Currently available in 13/8t oz 3” 2’s, 2oz 3½” 5’s and 1¾ oz 3” 6’s, it was the two 3” rounds that were evaluated. Available only in boxes of ten, each carton a veritable embossed work of art, any and all information any shooter requires has been printed on or around the glossy black, red and gold cardboard including the Xtended’s ‘Ducks Unlimited’ seal of approval.

Whether in 3” or 3½” form each thick black heavily printed plastic case is rounded off with a 17mm deep silver head and one of the tightest, fully sealed six-pointed crimps to be found on any cartridge. With hardly any roll to speak of, both the shorter cases measure exactly 66mm in length. Internally, both near spherically perfect 37.88 grams or 106 2’s and 48.38 grams or 366 6’s are buffed with Winchester’s familiar white nylon Grex particles, both charges of shot sitting in a cushion free plaswad.

Where the internal characteristics differ is that a fibre cushion is affixed to the inside of the 2’s wad, a slightly wider thicker, external version acting as an over charge wad for the 6’s. Both are propelled by a mixture of ultra-fine flake and granular powder, 2.6 grams for the 2’s, 1.98 grams for the 6’s. Ballistic wise, the 2’s produce a mean average observed speed of 1,033 fps, 1,043 for the 6’s whilst patterning at thirty yards through ¼ choke resulted in impressively uniform patterns, 96.2% of the 2’s in the 29” circle, the 6’s recording a lesser 59%.

I used both the 6’s and 2’s over three nights of duck flighting and was genuinely impressed. Shot through a semi- automatic if the Xtendeds have a downside it’s their recoil. In perceived recoil the 6’s are no more powerful than their larger shot sized lead equivalents. Its the 2’s that quite naturally generate a greater degree of punch,  not to a level that they’re uncomfortable but fore warned is fore armed, these rounds are best used as the Americans would - through a gas operated semi-auto.

The theory is that a charge of 2’s in non-toxic are the equivalent of a 1¼ oz of ordinary 4’s. Irrespective of the whys and wherefores, what these new Xtended loads deliver is a precise, well defined and measured delivery of shot where it counts. Yes, they’re expensive but you can count on these Winchesters to minimise injured birds, instead good clean kills being a nigh on guaranteed. All you need to do is ensure you’re on target.