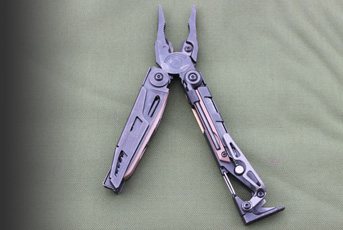 I confess to being a big fan of Leatherman multi tools. I own at least six of various types. I tend not to carry them around everyday but make sure I have the appropriate type stored permanently in the kit bag it needs to be in. Be it the Walking bag, Hunting bag, Air rifle shooting bag, Shotgun shooting bag or Full-bore shooting bag. Having them already in there cuts down on the need for additional tools and you always find a use for one of the tools on there that you never thought you would use. So I was excited when I found out Leatherman were coming out with a dedicated firearms tool, as till now I had to use one of the general multi-tools for shooting use.

I had to have one of the new tools for myself and thanks to the importer Whitby and Co. I now have one. The tool comes in two versions; the MUT, Military Utility Tool and the MUT EOD, Explosive Ordnance Disposal. Not having the need for primer cap crimpers or a C4 explosive punch I did not go for the EOD version!

The tool itself was developed after two US Army Sergeants (First Class) from the Marksmanship Unit at Fort Benning approached Leatherman about making a specific tool for the military. They wanted it to be useful for everyday tasks as well as having some more specific features for firearms maintenance. It was tested over two years including stints in Iraq and Afghanistan, and was unveiled at the Shot Show in 2009.

When you get hold of the tool it feels very robust and purposeful. It has 18 implements, based upon the now familiar folding back pliers concept; it packs these tools in and around the handles of the afore-mentioned pliers. The MUT version pliers are needle nosed with a regular serrated grip section below that. The EOD version has a blasting cap crimper in place of the regular grip section, it also has replaceable bladed fuse wire cutters in place of the hard wire 154CM wire cutter blades on the MUT.

The other non-firearms specific tools on the MUT are a hammer, a saw blade made from 420HC stainless steel, a bottle opener (very useful), knife blade in 420HC stainless steel, standard wire cutters and crimpers on the handle side of the hinge of the pliers, and a large bit screw driver bit with a straight and Philips drive head. All are very useful in everyday life.

The saw blade and the knife blade can be opened with one hand when the tool is shut and are of the locking type. It has a line-cutter style hook underneath the hammer section which can be used for cutting nylon twine or its intended use for the military, cutting off plastic zip ties on prisoners, and cutting off clothing to get at gunshot wounds without hurting the patient. Not uses we really have a need for as civilian shooters in the UK I admit… but it’s a handy function nonetheless.

The MUT can be carried in three distinctly different ways too, with the Titanium belt clip, which is one of the sturdiest belt clips I have seen on any pocket tool, or using the spring loaded karabiner/bottle opener section, or lastly in the MOLLE compatible very tough kaki coloured sheath.

For the military, this sheath can also house a double stack 9mm pistol magazine if you remove the MUT. The sheath has a press stud strap on the back to attach to a belt or for the military there is a MOLLE system of loops. The rear strap also has a pocket along its length to carry the separate removable wrench (spanner).

The real interesting bits are those specifically designed for firearms maintenance. It has a bronze alloy carbon scraper designed to fit inside the bolt carrier group of an AR style rifle, although it can still be used on other firearms bolts etc., too. The scraper can be replaced when it’s worn out. In fact the cutting hook and pliers cutting jaws can also be replaced using a Torx #8 key.

To aid the stripping down of an AR, and indeed many other firearms including the old Ruger 10/22, the MUT also has a 1/8” (3mm ) diameter punch.

The separate wrench has a ½” and 3/8” ring wrench head at each end which will fit most of the common scope mounting systems. The wrench itself has been made to military performance specifications.

There are two removable 63.4mm long steel bits, one housed on each side of the pliers handles. They are held in place by a steel plunger which can be pushed to one side or the other to allow the bits to be removed from the handles. One has a Philips #2 head and a ¼ screwdriver head and the other a Torx #15 and a Hex head 7/64 head. These last two are again found on a lot of firearms components, be it the guns themselves or lasers or scope mounts etc. A shorter removable bit (Phillips #1-2 and 3/16 plain screwdriver) is also included and can be left in the bit holder at the base of the handle or removed and stored in a slot on the handle while one of the other longer bits is in the driver.

Yet another neat touch is the head of the pliers on the reverse side are threaded for cleaning rods. You can use one of them if the tool is closed up but by screwing in the rod the tool itself makes a big “T” handle for the rod.

Another good feature is that the two handles can be locked together by a small catch. This is a very useful feature and not one I have on any other of my Leatherman tools. It comes into its own if you are using the tool as a hammer and have to close the tool up to do so. Or when using as a cleaning rod “T” handle. Also when carrying it with the pocket clip or karabiner, it prevents the handles from opening up when you are attempting to remove the tool from your pocket or gear to use it.

Every Shooter Should Have One

I have already used the MUT for fitting a sight to my GSG-5, stripping down and cleaning it, removing staples from target cards with the pliers, and dozens of other small but necessary chores.

Overall the MUT is the most useful Leatherman tool I have ever owned, it’s a fantastic bit of kit and every shooter should have one. I now take the MUT along when using full-bore rifles, rimfire rifles and shotguns.

It is quite expensive for a general use pocket tool, but then this is no general pocket tool, and top quality coupled with outstanding usefulness for shooters of all kinds makes it well worth its price.