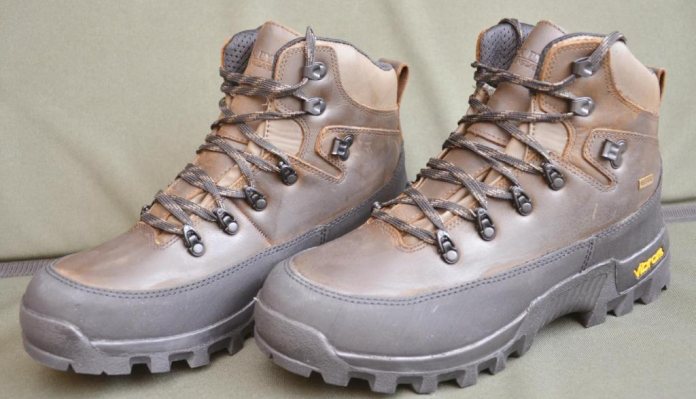 As a devotee of outdoor shooting sports - primarily airgun related, sourcing reliable, comfortable and serious kit for the job in hand, has obviously been paramount, as I spend a good deal of my spare time, navigating woods and fields around the country. Our climate isn’t always the most favourable either, so some technical back-up in the form of decent footwear, is a prerequisite. Jack Pyke is a popular brand that has offered the serious shooter what they want and need for some while now, and on test here are their Fieldman Boots, which are a mid-market offering, retailing as they do, at £135.

Only one colour is available, and that’s a highly practical brown, but style-wise, I reckon they look spot-on, with that meaty rubber Vibram Trek Hunter sole, and the high rubber rand (the black raised band around the base) combining well. All the bondings and joins look well-sealed, and the result is a solid, impressively robust feeling boot that looks the part. Jack Pyke specify the internals as a Hydroguard membrane, which is waterproof and breathable, along with 200g Thinsulate insulation. Hot but wet conditions are when ventilation can become an issue with footwear. But with that breathable aspect built in, and the relatively low ankle style, temperature control shouldn’t be a problem!

Lacing up and opening is simplified with the familiar speed lace open clip design, and importantly, construction here again feels tough and robust. Pull the boots on, and the level of padding soon becomes apparent. There’s a padded tongue and heel, and a thick lining around the sides. Indeed, look it’s obvious that comfort and protection in this area is significant, which results in a properly cosseted feel. Firm support is assured, but of course, for we shooters, movement when down in the shooting positions is also required. My usual kneeling stance posed no problem, and the full grain leather uppers have sufficient give to allow the necessary leeway. Boots always become suppler over time in any case and with applications of proper protective solutions.

Agion antimicrobial treatment to the fabrics also comes as standard, which apparently means that these boots should remain relatively odour-free for a significant period of time. Obviously, step into that putrid lake by mistake, whilst lamping, and the Agion treatment may struggle to compete, but under normal working conditions, the manufacturers are saying that these boots should stay civilised in polite company!

All in all, then, a satisfyingly comprehensive specification, making the Fieldman Boots suitable for an abundance of outdoor pursuits; as they perfectly represent the Jack Pyke ethos of no-nonsense affordable kit, that does the job nicely. There’s plenty of features, thick internal lining, a 100% waterproof grading, 12-month guarantee, and an air of durability that epitomises the brand.