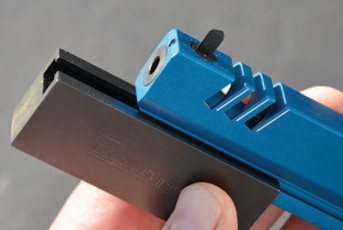 With last summer’s Olympic Games hailed as such a success story, many sports up and down the country are still basking in the knock-on effect to their popularity.

OK; the stitch –up regarding a non-existent legacy for shooting can’t be forgiven in a hurry, yet this apart, the event taken as a whole has to be seen as a great achievement for this country.

Residual inspiration and enthusiasm is there to be harnessed in abundance, and the shooting sports can reap the benefits too…

10metre Air Pistol is just one division among many in the highly competitive world of indoor target shooting but it’s one of the hardest to master. Speak to most shooters and they’ll agree that airguns in general, place greater demands upon the shooter, compared to live alternatives, due to an airgun’s inherently slow lock-time. Slow lock-time means greater ‘follow through’ is required in order to maximize accuracy. Ergo, air pistol represents one of the most demanding disciplines of all.

Top match grade equipment undoubtedly helps to furnish the shooter with the features needed to achieve results; and many high quality, ultra sophisticated products exist on the market. Modern pneumatic designs, as usual, dominate the sport, and most of the top manufacturers produce pistol versions of their flagship PCP rifles. Yet all this technology comes at a price, and many newcomers just aren’t prepared to take out a small mortgage at the early stages of their shooting career.

Encouraging those newcomers is the aim of the game, and the gun on test here, the Alfa Pro Air Sport-C pistol, is an ideal tool to do just that.

The Alfa Pro represents a joint venture between Air Arms here in Britain, and a company called Alfa Proj spol s.r.o (yes really) in the Czech Republic. Billed as an ‘entry level high performance’ pistol, the Alfa Pro can boast an impressive features list, and whilst it doesn’t come exactly cheap, on paper at least, it represents fair value for money.

Slick is the word that best describes this pistol, and there’s an undoubted appeal to its streamlined, slightly utilitarian profile. That super long barrel housing equates to a long sightline, which can only be a good thing on a target pistol, where open sights will be properly utilized.

The Alfa Pro is a single shot pre-charged pneumatic, with a regulated action that frankly belies its diminutive dimensions. When I first read that this pistol can generate in the region of 80-90 shots, I was looking for the screw-on air tank in the box. The fact that all the guts - regulator and air storage, are all neatly stored away inside that grip area, has to be considered a major feat of engineering!

Pick up the Alfa Pro, and the quality is instantly apparent. An all metal construction sees a barrel sleeve set within a solid shroud assembly; blue anodised to contrast tastefully with the action. The breech/action block wraps around to form an integral trigger guard, and all relevant edges are subtly radiused.

Charging the system requires the push-fit, black nylon cap to be pulled away from the base of the grip, to reveal a now standard Air Arms ‘T’ bar filler valve. One criticism here concerns the fact that the base of the valve cover is completely open, allowing dirt and dust to get near to the workings. Admittedly it’s a snug fit on the sides, indoor target venues are somewhat cleaner than outdoor competitions, and… OK; maybe I’m just nitpicking.

Once the pistol has been charged to the recommended fill pressure of 200bar, from either a dedicated pump, or divers’ bottle, then the pistol is good to go.

The ultra robust mechanism is cocked by pulling the cocking knob on the side of the action, firmly forwards, until it clicks and stays forward. At this stage, a manual safety catch on the left side, can be engaged if required. The cocking knob itself is ambidextrous, since it protrudes from each side of the action block, so shooters can find their preferred method of loading. Feeding a pellet into the breech is simply achieved by nudging up the small silver bolt to the left of the action, which springs rearwards under mild spring tension, with no further effort. Once a pellet has been rolled across and into the loading channel, the bolt can be gently pushed home, seating the pellet as it goes.

The all metal open sights are of the traditional notch and post variety. The foresight incorporates a three-sided triangular post that can be slackened off with an allen key, and turned round, to present three slightly different sized post elements. Similarly, the notch to the rear of the spring loaded, fully adjustable rear sight, can be altered.  Two small interchangeable plates offer the choice of four different sized notches between them, so plenty of scope for personal preference and settings is possible here.

Setting up and adjusting the sights took a little longer than I had anticipated, due to me not noticing the tiny markings referring to the sights adjustments. Why these couldn’t be boldly picked out in white lettering, I’m not sure; but adjustments themselves are suitably subtle for this class of gun.

No match grade pistol would be worthy of the name without a quality trigger, and I’m pleased to report that the Alfa Pro sports a nicely forgiving unit. Designed to be either a single stage or two stage unit, this trigger is easy to adjust, and again, beautifully made. The blade itself can be adjusted, both for angle (by rotating around the pillar), and for position (by slackening the support bar, and pushing the blade assembly rearwards). One minor criticism here concerns the fact that despite having large hands, I found I still would have liked the trigger blade set just a little further back- even when the blade was set at its most rearwards position. Many shooters will be more than happy with it as supplied though, and I’m aware that my personal requirements regarding triggers, are very individualistic. As a PCP, dry firing is of course possible with this pistol.

Home On The Range

Obviously why such an impressive shot count is possible with these pistols, despite the apparent lack of air storage space, is the fact that kinetic energy is extremely low, in keeping with the requirements of ISSF 10Metre Match Air Pistol. 10metre target shooting simply doesn’t need high power, which in simple terms means the on-board air supply can go much further. Over the chronograph, from a 200bar fill, I recorded 106 shots within 49fps.

Accuracy wise, I decided to shoot the Alfa Pro from a rested position initially during the zero process, purely to confirm the potential raw accuracy available to the serious enthusiast.  From a bean bag, and using the open sights, I posted a four shot group over the prescribed 10metres, which was barely the size of an enlarged pellet…and which could certainly grip one! A confidence booster if ever I saw one.

Free hand accuracy relied on my pistol shooting skills, which are rusty to say the least; yet 3/4inch spreads were fairly easy to come by.

Muzzle report is crisp, but fairly significant with this pistol, due to the fact that the design incorporates a muzzle diffuser or muzzle brake. Basically those stylish and highly functional slots cut into the shroud assembly, help to channel and deflect excess air as it escapes behind the pellet. The pellet itself then carries on its journey through the restricted muzzle, with most of the destabilizing air blast redirected safely away and upwards. In turn this upwards blast should in theory at least, help to push the muzzle gently down as the pistol fires, so the benefits are two-fold.

Personally, I found the balance of the Alfa Pro to be pretty good from the off, with a bias towards the muzzle - just as I like it. In the event that more weight in general, or more front weight in particular, is required, a significant weight block is supplied, which just slides onto the integral accessory rail at the muzzle, and nips up with small allen headed grub screws. Neat and highly effective, and yet more evidence of the attention to detail shown with this product.

Consider the options in this sector of the market, and the Alfa compares favourably with its rivals. As an alternative to the top level PCP offerings, costing at least twice the price, this Alfa Pro gives a darn good account of itself. The fact that Air Arms put their name to it should be enough to instil confidence, and as a serious introduction to top level 10 metre match pistol shooting, this product represents a sound investment- being well thought out, extremely well made, and highly accurate. GM