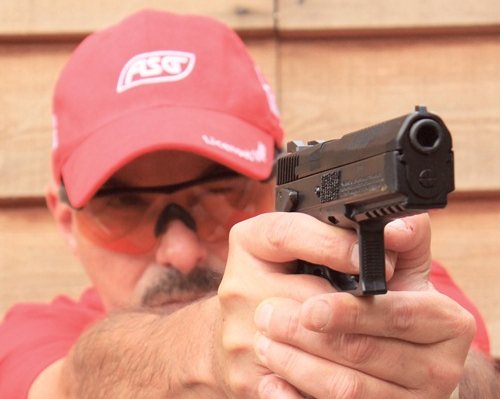 I have to admit before I even start writing about this month’s test model that I have huge respect for CZ handguns.

When I lived in the USA I was lucky enough to be able to attend both handgun and rifle shooting courses on a regular basis, and it was on an Instinctive Pistol Shooting course that I met the most remarkable gentleman instructor, a Vietnam Special Forces veteran who, upon leaving one service, immediately joined another as a Police Officer, spent five years undercover in Miami, and then went on to be a service instructor before retiring and continuing to instruct in the private sector.

Now this man knew all about firearms, as you can well imagine, and his choice of everyday carry model was the CZ75 which he described as “probably the best carry handgun ever made”, and who am I to doubt him? Norm, if you ever read this, thanks for all your patience in teaching and for all your years of selfless duty.

The CZ75 was introduced in 1975 by one of the largest small arms manufacturers in the world, Ceska zbrojovka Uhersky Brod (CZUB, or simply CZ) from the Czech Republic, a manufacturer prolific in both military and sporting firearms. It was one of the original, innovative 9mm pistols featuring a staggeredcolumn magazine, all-steel construction, and a hammerforged barrel. It’s a model that amongst shooters worldwide has a fearsome reputation for high-quality, accuracy, and durability. Over the years, though, the original model of 1975 went through numerous changes and upgrades which resulted in such models as the CZ75 ‘Champion’, the CZ75 ST (Standard) and CZ75 M (Modified). In 2005 came the CZ75 TS (Tactical Sports) variant which, with its slightly longer 132mm barrel, became extremely popular with IPSC Standard Division shooters.

Although the CZ75 continues to dominate in pistol shooting circles, in 2009 CZ launched a worthy addition to their range of handguns, the polymer P-07. Moving away from their all-steel designs they embraced new materials technology and a new trigger design to create a handgun that carried 16 plus one rounds of 9mm ammunition that weighed in at just under 840g! Glock had done a lot of the hard work in bringing the polymer pistol into the mainstream by then, so the shooting world was more than ready for a model from a manufacturer they already trusted and the CZ P-07 immediately gained rave reviews.

Fast forward to 2013, and not content with just one model in the range, CZ moved onwards to introduce the P-09 ‘Duty’.

The P-09 is essentially the big brother of the P-07 with a couple of changes that make it even more impressive. The barrel and slide have been lengthened to improve on already outstanding sighting and accuracy, and the grip itself is longer too which means that the P-09 can carry a staggering 19 plus one rounds of nine mil! It’s also available in .40 calibre where it still manages to hold 15 plus one.

CZUB say that the P-09 “was created on a basis of the long-lasting cooperation with many operatives from armed forces worldwide. It was stressed that the maximum reliability and accuracy is of paramount importance, while special attention was paid to the shooter’s comfort and ergonomics”.

In the real world the P-09 has been fully tried and tested in the harshest of conditions, and has proved a more than worthy addition to the range of excellent practical handguns offered by CZ.

You may have noticed in all the reviews I carry out on replica firearm models that I regularly make use of the words ‘Fully Licensed’, and it’s something that is very important to me. There are many ‘replicas’ out there that may on first glance look like the original that they are designed to resemble, but in many cases it is just that, a ‘resemblance’ rather than a true reproduction. Whilst this may seem unimportant, in fact it’s a vital part of how the industry works. Development of any firearm takes years, and costs many thousands of pounds, and both aftermarket parts and accessories form yet another part of the process. Trademark infringement is a serious matter, and failing to work with manufacturers could see them withdraw their products all together from the replica market.

You might be able to buy something that looks like a CZ, but will that necessarily come with the same after-purchase backup, or indeed will it even fit a holster that has been designed for the original. Many copies vary in overall size, especially frame size, to get around license infringement and in my mind there is nothing as annoying as buying a holster or a taclite for your replica and finding they don’t fit!

In my opinion ActionSportGames (ASG) from Denmark are one of the best in the business at getting their licensing agreements right, and ensuring that what we as buyers get is 100% the right thing. Although only established as ASG in 2003, the company heritage goes right back to the 1960s. ASG aim to give us exactly what we want before, during, and most importantly possibly, after, purchase.

In relation to the P-09 this means that they have worked hand-in-hand with CZ designing this air pistol to provide a completely authentic look and feel. Each P-09 even comes with a unique serial number and authentic CZ markings; on the left of the slide you’ll find the legends CZ P-09 and Duty with a small CZ logo and on the right the serial number and a small ASG logo. Inset to both sides of the pistol grip is a slightly larger CZ logo meaning that this is a fully tried, tested and properly licensed replica.

The P-09 arrived neatly packaged in a striking, fully illustrated box which contained the pistol, one magazine, a full-colour instruction manual and a small tin of ASG Diablo 4.5mm/.177 pellets. The latter may not be standard but I always ask for the correct ammunition that the replica has been designed to use.

Externally this is a large but pleasing handgun; I wear a regular size Large glove, and although slim, the grip of the CZ fills my hand well with some positive stippling and great ergonomics. Due to the clever nature of the stick magazine, which has an inverted 2 x 8 capacity with an eight pellet/BB rotary wheel at either end, the grip remains slim whilst securely holding a 12g CO2 cartridge. Simply pulling down on the false magazine baseplate opens the backstrap and gives easy access to the cartridge compartment.

The top slide and many of the working parts of the P-09 are full metal so it’s also a nice weight in the hand, 702g as opposed to the 840g of the real thing. It feels substantial and solid throughout. Controls are as per the real thing too; there’s an ambidextrous safety/ decocking handle to the rear, a non-functioning slide release, and the magazine catch is down to the left behind the pistol grip. At the lower front is an integrated rail, which allows standard accessories to be fitted; I tried it with several different handgun lights and all fitted perfectly with no wobble.

All of this information is all very well, but at the end of the day, as perfectly formed as the P-09 may be, how does it perform? I have to say ‘splendidly’!

The CZ also benefits from a properly rifled barrel which means that it sends the Daiblo pellets out in a nice flat trajectory. The trigger in single action is superb, although there is a little take up when the pistol is used in double action mode. The front and rear dot sights are non-adjustable, but are easily acquired and straightforward to work with; this is a tactical pistol, so there’s nothing fancy, just stuff that is solid and works. Once I’d got used to the sights and trigger it was pretty easy to get tight groupings out to 10 to15 metres. The pistol is capable of far greater range so you need to be certain that there is sufficient clear space beyond your shot though!

Just to put this in perspective ASG claim that the P-09 will launch a .33g pellet or BB at up to 492fps! Even with the .47g Diablo I was getting a steady 380fps through the chrono, with one heading downrange at a little over 400fps with a nice kick from the blowback function. This is a powerful pistol anyway you look at it, and as always should be treated with respect!

All in all the CZ P-09 fully lived up to the high-expectations I had of it, and I can see from the build quality that it will give me hours and hours of shooting fun for some considerable time to come. Given the accuracy of the 1:1 scale I’ve even had the confidence to order a custom Kydex holster, as the CZ P-09 is most definitely a keeper. It’s sturdy, solid, responsive and a joy to shoot.

What more could you ask?

My thanks go to ASG for providing the test model.