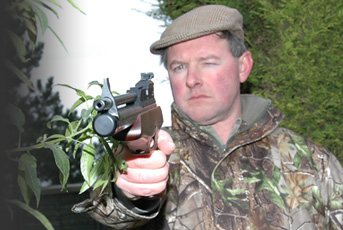 Being an ardent enthusiast of outdoor airgun competition shooting, I have tended to focus on specialized kit intended for Field Target and HFT.  This single-minded approach has resulted in me overlooking the world of air-pistols for far too long, and some recent examples have really opened my eyes.

Brocock have marketed their own PCP airguns for years, but they’ve hit the headlines recently, with their eye-catching AimX brand of PCP’s which are streamlined and boldly styled, helping to create a distinctive brand identity. There happen to be some pistols in this line-up, so I just had to try one.

On test here is the AimX Grand Prix pistol, and this version has the new open sights fitted.

Brocock really package their products well, and the Grand Prix was neatly sandwiched in egg-shell foam, within its carton. First impressions are of a pistol a lot smaller than that in the company’s adverts. Once this pre-conception is discarded though, the dimensions can be appreciated for what they are… just about spot on!

The one-piece walnut stock is a lovely piece of design, whilst being totally ambidextrous. An integral wooden trigger guard, subtle palm shelf, and chequered grips, all add to the superior feel, and in a two-handed aim, with one hand cupped under the pistol grip, the Grand Prix just feels right.

Quality engineering and an exemplary build quality is much in evidence, and one twist of either the barrel thread cap or the stylish valve cover, reveals a level of refinement that sets this pistol apart. That barrel cap incidentally, protects the 10mm thread underneath, in readiness for a silencer to be screwed into place; a prerequisite if close range vermin control is on the agenda. Un-suppressed muzzle crack isn’t obtrusive, but it is significant, and just something to bear in mind.

Vermin control is a serious option with this pistol too, (which I’ll come to) and according to Brocock, many customers are doing just that. What came as a surprise to Nigel Silcock, Brocock’s MD, was the clamour for open sights, and with a nod to the classic ethos that the customer always knows best, Brocock promptly leapt into action and resolved the issue - and apparently, sales of the version complete with open sights, now outstrip the original by a ratio of 5:1.

I can see the attraction too, and the open sights fitted to this Grand Prix, are, it has to be said, excellent; with a crisp post and notch sight picture.

The foresight is an integral element, forged as part of the front muzzle/cylinder clamp, and as such, is a chunky, robust affair. The rear-sight is a detachable assembly, machined with a chunky dovetailed base, which slides onto the scope rails. I’ll refrain from using the word ‘simply’ in front of ‘slides’, since my only criticism of the Grand Prix concerns this rear-sight. Herein lies the niggle; to add or remove the sight, the top leaf has to first be unscrewed, in order to gain access to a small Allen screw beneath. This screw holds the base to the rails. One additional neat hole in the top leaf, at the production stage, would simplify the whole design, but this GP is too good to dwell on such a minor shortcoming.

Charging the GP is a simple affair, via a Daystate style bayonet valve connector, and from a 200bar pressure fill, around 60shots are available in the smaller calibre (on test); which I reckon is excellent. Brocock quote 60, and my test came in bang on the button within a few shots. If you’re prepared to forgo a few shots, tests revealed that consistency could be trimmed from 34fps to 22fps, if just the first 50 shots were used before refilling, although this is irrelevant (at the point of aim), unless shooting was over longer distances.

Once the potential is realized of this pistol however, those figures just may have more bearing. Over 10yds, and shooting from an unsupported two-handed stance, groups of around an inch were regularly forming, which were helped in no small part to a very impressive trigger unit; although I should state at this point, that I am no acclaimed pistol shot!

A totally crisp adjustable two-stage trigger design, coupled with an unusual and ultra slick, spring loaded cocking bolt, all add to the user-friendly, quality air of the Grand Prix, and having now spent some time with the pistol, it’s apparent success doesn’t surprise me.

As already stated, I was impressed with the open sights, finding them very effective up to about 20yds. At this range, RWS Superfield pellets achieved groups of just over half inch from a rest, whilst at 25yds, these opened up to around 2.25inches - but my eyes were struggling at this stage…

A thorough test therefore just begged for glassware, and with a Rhino 2x32 pistol scope, also supplied from Brocock, it was rude not to, as they say! From a rest, and with the scope fitted, accuracy from the Grand Prix was just phenomenal, punching quarter inch groups at 15yds, and culminating in .75inch groups at 25yds! I’ve shot some rifles that have struggled to achieve as much, and it really does demonstrate the GP as a devastating piece of kit in the right hands, and I hasten to add, in the right conditions - i.e shot from a bean bag/bench.

As usual, the taking of live quarry with any airgun is dependant upon the range at which the shooter is capable of tight groupings - and that really should govern the proceedings. That said, if close range vermin control is the aim, then this AimX Grand Prix from Brocock, has to top the list! Alternatively, as a quality air pistol for HFT Pistol, or just informal shooting for the sheer hell of it, this excellent Grand Prix gets top marks from me.