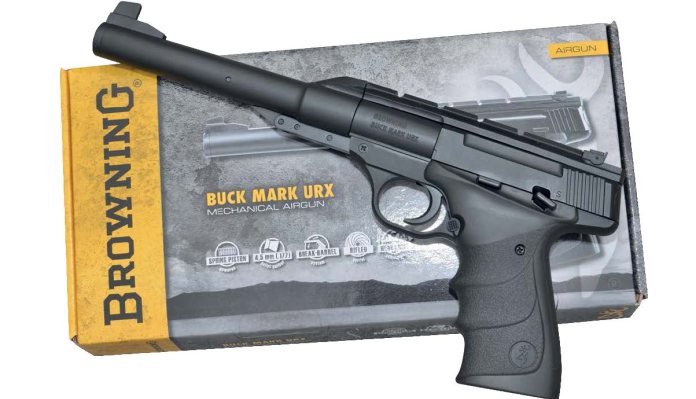 Umarex is the world’s largest manufacturer of replicas, and many are reproductions of famous brands under license, such as Beretta, Browning, Colt and Smith & Wesson. The vast majority are CO2 powered, and this means the gun can be largely free of mechanics, and just has to house the 12-gram CO2 capsule. However, on test here is the Browning Buck Mark URX, and this one had me fooled - for it’s actually a very neat piece of design, housing a spring-piston power plant inside. How it manages to achieve this in such a sleek profile is a testament to those clever chaps at Umarex, but before we get to grips with how it shoots, let’s just take in the visuals.

Attention to detail and build quality are synonymous with the Umarex brand, and I’m pleased to say this Browning model doesn’t disappoint. Externally, this pistol is a faithful reproduction of the .22 semi-auto rimfire version, and at 1.5lbs in weight, it feels solid and well balanced in the hand.

First impressions are of a pleasingly well made and finished pistol, and just picking it up and sighting gives plenty of feedback. The grip is pleasing in the hand, gently contoured, and with a soft-touch finish, and the world-famous Browning logo at the base, it all looks and feels the part. The all-metal construction, save for those grips, is a big plus, and the matte black finish throughout is both smart and practical.

As mentioned, given Umarex’s track record, you could be forgiven for thinking this model is CO2 powered, yet take a close look on the underside of the barrel and you’ll just notice the sleek, articulated cocking linkage, which is the main giveaway to the spring piston action that lies within. Just looking at the setup, I thought initially that the prominent foresight would be in the way. However, breaking the barrel and cocking the action is just so easy; perfectly weighted, with minimal effort. So, place the cocking hand on the barrel, by the foresight and you’ll find there’s still plenty of leverage.

With the breech open, the pellet drops straight into the barrel, plus with a sprung loaded detente and an air of precision around the breech area, it all feels very civilized. That said, just check the pellet doesn’t drop out by keeping the barrel slightly down as the breech is closed. This is always a good move with break barrels, dependent upon pellet fit. Barrel lock-up and breech closure are again perfectly weighted, and this all adds to user appeal for sure.

In the aim, those soft-touch contoured grips do their job and the long sight base is another great feature, but you will need a screwdriver for the fully adjustable rear sight. One minor detail here is that the windage screw moves in the opposite direction to that expected, but adjustment was still easy, and once set, you can relax. Given the extensive run of Picatinny rail, fitting a scope is easy if you really insist, but just make sure it doesn’t foul the opening breech area if you take that route.

To be honest, this Browning Buck Mark URX is primarily designed as a fun pistol, and as such, the open sights are the way to go. There’s an automatic safety catch on the left side and this needs to be disengaged before each shot. As for the trigger, this is perhaps the weakest element of this pistol, being just a little stiff to release and non-adjustable. The saving grace of course is that broad, well-shaped, flat-surfaced trigger blade, and given the extremely smooth firing cycle on offer here (more of a mild snap, with no spring resonance) it’s difficult not to enjoy the shooting experience overall.

This type of pistol is never going to be about power output, but for the record, the energy came in around 1.8ft/ lbs. 10-shot strings with a total spread of just 8 FPS are encouraging, (using Top Shot wadcutter pellets on test), whilst groups of around 1.25” over 10 yards, shooting with open sights, is a good rough guide of what to expect.

OK, as airguns go, this model is fairly basic stuff, but the key is in the execution. Umarex is of course a master of the art and with the sleek design, plus the satisfying finish on offer here, this Buck Mark URX remains great value at the asking price of £89, or even less for those willing to shop around. So, whether a lover of reproductions or just seeking a starter pistol for general use, this model is a whole lot of fun for the money.

Thanks to Range & Country Shooting Supplies in Sleaford, Lincs for the kind loan of this pistol.