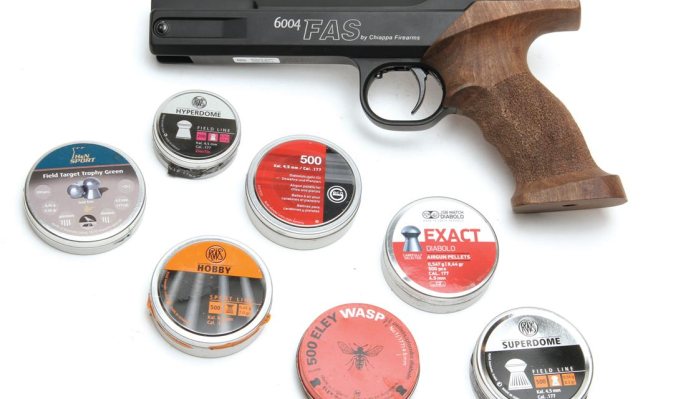 FAS is a long established air pistol maker, which are now part of Chiappa Firearms brand and distributed by Edgar Brothers here in the UK. It is a single stroke pneumatic design aimed at the entry level target shooter or someone wanting very good accuracy from an air pistol. It is available in two guises; standard or Match, with differing furniture but the trigger, and action/barrel remains the same. Well made and appointed, the FAS 6004 represents very good value for money and is a standalone pistol in its class.

The format is pretty familiar these days on single stroke pneumatic pistols. The most popular design that ensures mechanical advantage and good accuracy with ease of manufacture is the ‘up and over’. Here you have the carbon steel barrel supported within the top action sleeve that pivots at the muzzle end in an over the top cocking action, which draws air into the pistol’s cylinder, which is fully compressed when it’s back down and closed. That’s the brief description. The action is an alloy, which is then spray painted satin black and has the top section with barrel and bottom section with integral trigger guard and grip tang.

The barrel is 7.5” long and is secured in place by a support around the muzzle and a small clamp at the rear. This means it sits within the top action piece and as it is opened the barrel is exposed and a pellet can be pushed into the rifling. There is a black synthetic O-ring at the breech end that seals the barrel to the rear block on closure. This is a bright alloy block with a 3.5mm hole that allows air flow directly into the barrel. It rises slightly as the FAS is opened and cocked and as you draw the barrel upward to cock, you can hear the wheeze of air as it enters the 25 mm diameter air cylinder. As the top receiver/barrel assembly is closed you meet resistance at about a 90° angle and this increases at 70° and then onwards, you need quite a bit of pressure to close.

This is best done with the flat of the hand to avoid pinching the web of your hand between the two action parts. The top receiver is secured for an airtight fit and is released via a small blued metal latch sited to the left of the rear sight. Push this latch in and it withdraws a small spur from its housing in the steel insert behind the alloy air release block.

In truth, it is a real fiddle to operate. It’s too close to the wood stock to access properly and you cannot get a good enough grip to lift the top receiver. There are two raised lips to the sides of the receiver to aid in cocking but it is still hard. Over the course of the testing I perfected the knack, but at least it ensures a precise and accurate air seal and barrel alignment. My only other beef is the painted finish was showing signs of a bit of wear and flaking of around the hinge pin and sight area!

The stock however, I can find very little to criticise. You have two options- the standard grip that is ambidextrous or the Match version that is a fixed grip but both are walnut. In fact, they are nice pieces of wood, good colour and some nice grain, with a quite dry but natural oil finish that I like.

This standard model is ambidextrous and as such has a raised shelf to the bottom of the grip to both sides to rest the bottom finger on, with a nice slow arch to the back section and three finger grooves in the front strap and a small thumb and finger rest to the upper section. The grip continues up over the back of the action and continues under the rear sight and has a large spur rearward to act as a top support bridge.

The vital gripping areas are all stippled, which here is better than chequering and matches the overall finish of the FAS. Overall design here is excellent, giving a combination of a natural hold combined with fatigueless aiming and quality walnut to boot.

A good trigger is always important on any form of firearm or airgun, as you want an instant or controlled release, combined with a fast lock time to ensure the best possible accuracy. This is fast due to its pneumatic nature of the system, so the trigger has to be good also. Well it is! The blade is a smooth, quite broad black painted affair that has a single action mechanism that is also adjustable. You have four adjustment screws and thankfully there is an instruction book to guide you through the steps needed to obtain a perfect release.

The first screw is sited in front of the blade and adjusts the weight, clockwise to increase it or anticlockwise to decrease it. The second is inset into the front of the blade and adjusts for stroke and position, clockwise for longer stroke and anti clockwise for a shorter movement. First and second stage of the pull are adjusted via twin screws that are also set into the blade. The top one adjusts for the drop point of the first stage, whilst the release of the second stage is by the second or lower screw.

The front sight is a fixed, low and quite a broad blade. At first it seemed a bit too low, however in use on a standard, precision bullseye target it sits level and below the bull so it does not obscure but actually gives a good steady aiming point and picture. The rear sight unit is, as you might expect, fully adjustable, in this case via integral slot-headed screws and shows a fixed U-notch; often target pistols of this type can offer different sizes but not here. To adjust the impact vertically, the large screw in the centre of the sight plate is rotated anti-clockwise and obviously reversed to drop it. Windage is taken care of by the second screw on the left of the sight block and to move the impact point to the right, you turn it clockwise and vice versa.

This is a match air pistol for club use really and as such 6 yards I guess is its proposed range. Me, I wanted to test a variety of pellets other than match or wadcutters, as for me it makes a very good accurate plinker for casual fun target or spinners shooting;

The accuracy tests were from a rest, with my left hand supporting under the right wrist, as I am no single-handed target shooter.

I have to say, consistency wise, all the pellets were well below 15 fps variations with the Hobbies and JSB Exacts around 5 fps deviation. I tested all over a chronograph but found the Hyperdomes a bit too tight and their non-lead nature made the FAS hiss at me. You need a certain amount of initial pressure to get a pellet started, as with bullets, and these were not having it at the target velocities of the 6004 FAS. The FTT Green, also tin, were fine though.

As you can see, velocities were all about the 350 fps mark with the 373 fps from the FTT Greens being the highest and an energy of only 1.7 ft/lbs, but that is of no concern when punching paper at these set distances in target shooting. Interestingly, the heaviest pellets, JSB Exacts shot the best, their 8.5-grain weight gave a slow velocity of 337 fps but highest energy figure of 2.1 ft/lbs and miniscule 0.302”, 5-shot groups at 6 yards. In fact, all the tested pellets shot below 0.7”, which is impressive.

One thing I think FAS are missing is a scope mount fitment, I know it’s not that type of air pistol but I bet it would be really accurate set up this way and increase the appeal to a broader range of shooters. A simple detachable dovetailed ramp would fit easily to the flat top receiver.