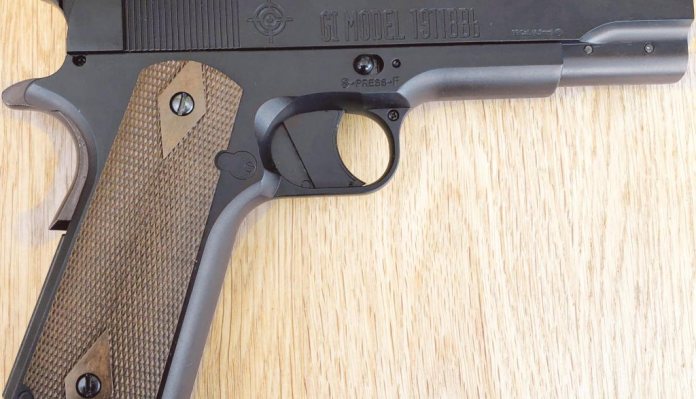 You’ve got to hand it to the late, great John Moses Browning, he really was a genius in the world of firearms design! He turned his hand to every type of firearm and armed a huge proportion of the world’s armies and put sporting guns into the hands of millions of hunters and recreational shooters the world over. He built his first gun aged 10 and went on to design for Winchester in the US and Fabrique Nationale in Belgium. He came up with falling block, lever action, pump action and semi-automatic rifles, as well as the classic Browning Auto-5 semi-automatic shotgun. The Browning M2 .50 calibre machine gun entered service in 1918 and is still in service to this day, which is quite some achievement.

His pistols were all elegant designs; from .32 and .38 calibre pocket pistols, made by Colt and FN but it is the mighty Colt 1911 service pistol that is a true legend. When many armies were still using revolvers, such as Britain with the Webley .455, the United States declared an interest in a semi-automatic repeater, firing a large .45 calibre bullet. Browning had already designed the 45 ACP, so the ammunition was already available and his new design that featured a short recoil action, with the barrel locked to the slide when the cartridge is fired and the swinging link pulling the rear of the barrel down to unlock it during the reloading cycle; this action is used by the majority of semiauto pistols to this day and the 1911 and later A1 version are instantly recognisable. Many variants of this pistol have been manufactured over the years and it is still incredibly popular, despite its age – it appears that John Moses Browning got it spot on all those years ago!

The popularity of the 1911 has led to it being copied in .22 rimfire but not everyone can, or wants, to own one capable of firing live ammo; so, several companies have made less powerful replicas over the years. The pistol on test, Crosman’s GI 1911 has got to be the most realistic however, as not only does it fire steel BBs, the slide also recoils in a similar way to the original .45 version. So, let’s start by examining the GI in detail.

The realistic lower frame is fairly faithful to the original and is made from alloy (as is the slide) and even has a spring-loaded but nonfunctioning ‘grip safety’ that in the original stops the pistol from firing unless the pistol is held correctly. The GI weighs over two-pounds, so really feels the part. There is a chequered, push button magazine release catch that drops the BB magazine when pressed and it can be carried out with the thumb of the firing hand – if you’re right-handed. The in-line magazine has a spring-loaded follower that pushes the BBs up into the action; there is a capacity of 20 rounds, plenty for can mangling and informal target practice and good old plinking. The grip scales are chequered brown plastic, but look quite like the wooden ones found on the original.

The safety catch on the left of the frame, beneath the hammer is solid but there’s a functioning, sliding catch safety on the right side of the frame, just above the trigger; back for SAFE, forward for FIRE. There is an authentic looking lanyard ring at the rear of the mag well and a slide stop above the trigger. The slide can be locked back manually and it is also pushed up by the magazine follower, just like on the real 45. The slide is very true to the original as well and can be pulled back manually but it doesn’t actually cycle anything but it ‘cocks’ the dummy hammer each time it travels to the rear but the hammer travels forward with the slide and is not held to the rear. The moving slide certainly adds a touch of realism to the overall pistol but more on this component later.

Power up, load up

To power up the GI, you need to set the safety catch to SAFE and drop the magazine; then, holding the pistol on its side, remove the left-hand grip scale by placing a finger nail under the bottom and pulling upwards. Be careful here, as the ‘piercing wrench’ is no longer held in place and can drop on the floor if you’re not holding the gun on its side; Okay, I did it a few times but managed to catch it! The piercing wrench is actually what would be the mainspring housing on the real 1911 and has the lanyard at the bottom. If an empty capsule is in place, the hex headed wrench is used to undo the piercing screw and the old capsule dropped free. A fresh bulb is then placed into the appature, neck first, and the wrench used to tighten the screw; a hiss will probably be heard when doing up the screw but stops when the screw is tightened sufficiently. The piercing wrench is then slotted back into the rear of the grip and retained in place by re-attaching the left grip.

The magazine obviously needs filling before the action can start and the follower on the left side is pulled down and pushed across into the recess to hold it in place. Steel BBs are then dropped in to the filling hole on the rear. When 20 BBs are in place, the follower is then gently released but it’s a very good idea to do this as carefully as possible and to also hold your hand or finger over the top of the mag, to stop any BBs from popping out – you want them down-range, not on the floor! Even though the safety catch is applied during the capsule replacement and mag loading, it’s always good practice to keep your finger away from the trigger, as with any gun.

Once you’re all loaded and gassed up, you’ll need something to shoot at, preferably something that won’t cause the BBs to ricochet all over the place. It’s also advisable to wear suitable eye protection, as you only get one pair of eyes and you don’t want anything damaging them. I hope I’m not worrying you unduly, but care should always be taken when shooting any gun but guns that fire steel BBs especially. I use a large cardboard box stuffed with an old duvet to mount target cards on and it’s served me well over the years and seems to get heavier and heavier each year – I wonder why?

The GI 1911’s sights are just as on the Colt, a small blade up front and a U-notch at the rear and it’s worth familiarising yourself with them before you actually start shooting. There’s just enough light either side or the foresight when viewed through the rear, so a quality sight picture is easy the achieve. The safety catch can now be pressed in and slid forward. The double action trigger pull is far from a Match unit with a pull of around eight-pounds, but it does the job well and is predictable and seemed to get better the more I shot the pistol. It’s possible to pull through until you can hear a click and feel it about to trip the firing mechanism and accuracy certainly improves using this technique. Accuracy is pretty good for a gun with an un-rifled barrel and it was printing about 1½-2-inch groups at seven-yards, better when I put my mind to it and is more than enough for informal target work and plinking. Half litre plastic soft drinks bottles hung on strings make great targets and they don’t cause ricochets.

I got about five magazines worth of fast-fire fun, so that’s 100 shots, which is very good when you consider that some CO2 is used to make the slide recoil. The moving slide adds a lot of realism to the whole shooting experience and the last round hold open facility is great, so that you know exactly when to reload, without firing blanks and wasting gas. Loading the mag is easy, so you’re back in action quickly.

The GI produces around 400fps, so that’s fairly powerful and made a real mess of the plastic bottle targets. It’s not too loud either, so shouldn’t upset the neighbours if you’re using it in the garden or garage - just be mindful of those dreaded ricochets from unsuitable targets and job’s a good ’en! At around £125, the Crosman GI 1911 is good value for money and loads of fun.

I really enjoyed being a ‘GI’ for a while, thanks to this neat little Crosman and if you fancy one yourself, enter our free the enter competition and you could win one! Good luck!