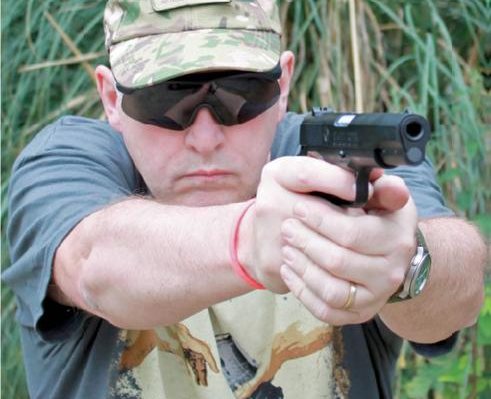 I really rate Crosman BB plinking guns, they make the function and design of a plinking just gun right. The GI Model 1911BB is based on the iconic Colt 1911 .45 calibre semi-automatic pistol. I’ve shot a few proper .45 Autos over the years and the feel of the Crosman CO2 powered 4.5mm BB firing pistol is really close to the real deal. The overall width of the grip is the same, the overall length of the pistol is the same, the weight is as near as damn it the same. The stupidly long reach to the magazine release catch is the same, they even designed in a faux moving beaver tail safety on the back strap.

Being a CO2 pistol, the standard 12-gram bulb is carried in the grip. The left-hand grip scale has to be levered off the frame – you have to stick a finger or thumb nail into a small notch to do this. Then you need to remove the gun’s BB magazine via the button behind the trigger. The base of the back strap then slides out, this has an Allen key moulded into it, very neat and it means you will always be able to fit a CO2 bulb and use the gun.

After you load the removable magazine, Crosman say the magazine holds “Up to 20” 4.5mm steel or copper coated BBs. The magazine is by far one of the easiest BB magazines I have found to load. It has a 4.6mm diameter aperture on the back of the magazine body. It has the normal spring loaded BB follower, pulling down the catch on the side of the mag it can be locked in the down position, allowing BBs to be tipped into the loading hole with a speed loader. If you hold the magazine with the top angled downwards it takes mere seconds to load in the BBs; I own many BB pistols and the 1911BB beats them all for speed loading. Handily, the magazine cannot be inserted incorrectly in the magazine slot at the base of the grip.

Crosman make a point of telling you that the gun takes steel BBs and not lead, its detailed on the impressive looking packaging and it states it clearly in the very good instruction manual. The safety catch is above the trigger on the right-hand side, it’s a button which has to be pushed in to move it. In the forward position, it is ready to fire, there is an ‘F’ on the frame. Pushing it in and to the rear locks off the trigger and puts the gun in the safe mode. There is no red or white dot to detract from the 1911 aesthetics of the Crosman.

The barrel is a smooth bore and testing it at six-yards it proved surprisingly accurate. I’ll mention the sights here; it has fixed open notch and post sights, with a sight base of 165mm. Even so, it shoots groups consistently under 25mm at six yards. The trigger is double action only; it feels very smooth and comfortable in use and the trigger weight for the double action was 3.7kg. They have made the trigger blade resemble that of a real 1911, it does not slide back but has the solid look of the real deal, something most other ‘wanabe’ 1911 Co2 pistols ignore.

It has a faux hammer at the rear, which just moves back and forth as the top slide is blown back by the CO2 discharging a BB. You can feel the gun recoil as it does this. The top slide can be locked back with a catch on the left-hand side of the frame, this is in the same position etc., as a real 1911. The top slide has a faux cartridge ejection slot with the action machined to bare silver coloured alloy to resemble the barrel of a 1911. It has last shot hold open, exactly like a real 1911; so, on the last shot, the top slide stays back, indicating there are no more BBs left in the magazine.

It also has the lanyard loop on the grip, Crosman have made for me what must be a near perfect plinking pistol and you can shoot four magazine’s worth of BBs from a single 12-gram bulb. It is very accurate for a smooth bore, the grip is superb. It has the cool blow-back top slide and it has a removable stack magazine. If you want to feel what it’s like shooting a 1911, moving top slide, last shot hold open etc. the Crosman Co2 GI Model 1911BBb is the closest a UK air gunner can get.

The higher price tag compared to the run of the mill Co2 pistol is completely justified if you’re a 1911 fan, as it’s tough to get better CO2 1911 than this Crosman version.