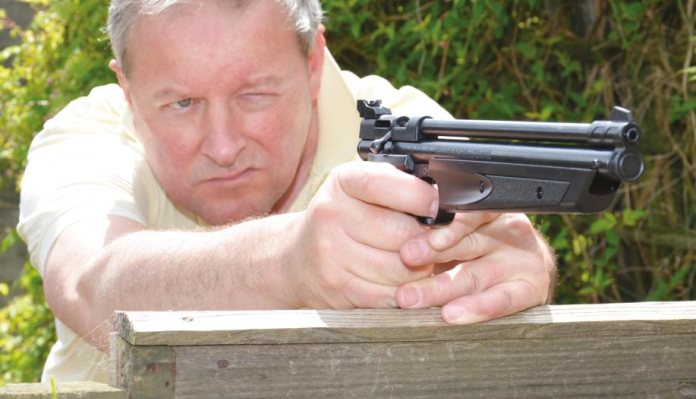 Originally available as the Crosman ‘Medallist’, the P1377 underwent a few internal tweaks in around 2007. It still carries the model number, but ‘American Classic’ is now the rather more exciting nomenclature.

Multi-pump designs have always been popular in the States, and the famous old Crosman brand has been producing this type of airgun for decades. This is a timehonoured model for sure, and who can’t remember seeing a similarly styled pistol in various product line-ups, often sold in catalogues, such as Grattan’s, back in the late 70’s/80’s.

OK, it’s a cheap and cheerful design, but give it a work out, and you’ll soon come to appreciate, as I did when I first tested one, that there’s something particularly satisfying about the performance. This latest version has just been treated to new furniture around the pistol-grip and forend too, which is nothing more than it deserves in my book.

The American Classic, is basically a pump-up pneumatic pistol, that offers a self-contained power source, and recoilless performance all rolled into one. It’s modestly priced, being aimed at the general/fun shooting sector of the market; yet with that unique action, some surprising results are on offer.

There’s no getting away from the fact that this Crosman is fairly basic in the way it is made and constructed, and the new grips are still fashioned from fairly cheap feeling plastic; yet the profile still continues to impress, given that unusually long sight line. Those sleek grips and lengthy rifled barrel combine well, and the result is a satisfyingly effective design, when used properly.

The open sights and breech block may be plastic, but everything else, including that central frame that runs between the grips, is metal - adding significant weight and feel to the proceedings. Basically, this Crosman still has a serious feel to it, and with chemical bluing applied to the barrel and compression tube, it has undoubted appeal. The new synthetic, two-part grips add a touch of style, but the power plant remains largely the same, which is no bad thing!

A key feature of this pistol, is that multi-pump facility at its heart, allowing for the power to be varied as required. Whilst power in itself is largely irrelevant with an air-pistol, being able to just use a minimum output at close range is a handy asset. Pumping up the action is carried out by holding the pistol-grip in the right hand and using the left to pull down the forend (hinged at the muzzle) until the handle reaches the end of its arc (air is sucked into the chamber at this stage). You then reverse the pump stroke and close it down again and pushed closed, (without catching fingers!) compressing the air now in the cylinder, as it goes. Obviously, as the number of pumps increases, so does the effort required to close the action. If a deliberate pumping stroke is adopted, then the effort is still manageable, even after the full ten pumps.

The manufacturers state that between four and ten can be used, but in my experience, four is perfectly sufficient, and relatively easy to achieve, so I wouldn’t go to any more effort.

Of course, with this style of air pistol, it’s more about general fun shooting. However, given the potential accuracy on offer, it pays to adhere to the one key rule that applies to both this style of multi-pump airgun and single stroke pneumatics, namely that a consistent pumping stroke needs to be adopted when priming the action. In the case of this Crosman, it’s vital to fully extend the pumping arm to its maximum arc, before closing. This ensures that an identical volume of air is sucked in and compressed on each stroke, for a consistent power delivery.

With the action primed, the small bolt needs to be cocked and a pellet rolled into the loading channel. There is a slight lip into the breech, so using the bolt to slide the pellet along the channel can feel a bit ‘sticky’, as it inevitably tries to enter at an angle. Pushing the pellet up to the open breech with the finger is the key though, for a smooth approach.

If I have to find fault with this model, I’d say that the rear sight is just a little too basic. The small sight block can be moved left and right simply by slackening the top screw inside, although movement is limited and not helped by the fixed nature of the front blade. Likewise, there’s a reversible plate featuring a U-notch or peep sight aperture, but movement is again a little limited to alter the impact point. Scope rails would be handy too, which would just add a different dimension, given the impressive level of accuracy on offer, in the region of ½” groups over 10 yards, once you do your bit. Trigger-wise, the blade is nicely curved, but could be wider to spread the load on the finger. Release, however, is fairly predictable and not overly heavy

When all’s said and done, I appreciate this model, still one of my favourite pistols, is made down to an extremely affordable price. Those new grips certainly give the American Classic a fresh look, and with a recoilless action, rifled barrel and that unusually long sight line, the end result is a whole lot of airgun for the money. Indeed, if ever there was an airgun greater than the sum of its parts, then this is it!