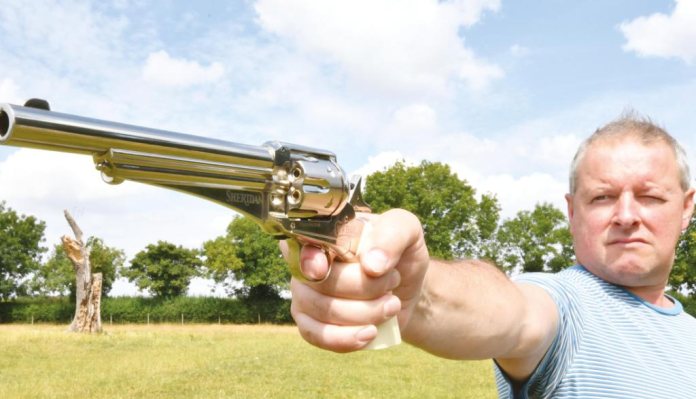 Collecting is a funny old game, and whether it be stamps, rare books, firearms, or airguns, the principle is much the same. Replica airguns are a case in point, and CO2-powered models in particular are increasingly being fashioned to look like their firearm counterparts; giving rise to collectors, who consider ‘pride of ownership’ as important as down range performance.

On test here is a new model from the Crosman Corporation, - the Sheridan Cowboy, and it’s a real head turner for several reasons. In truth, it’s an excellent copy of the Remington 1875, which was their attempt to compete with Colt’s highly successful Single Action revolver. For enthusiasts who want to buy into the history side of things, this model beautifully captures the look and feel of the original.

It arrived in a basic see-through blister pack, which sets the mind rolling back to good old Woolworth’s toy department. Take it out however, and any reservations fall away, as firstly the weight, then the sharp machining work, takes you by surprise. The nickel finish is excellent, and the sheer precision of the revolving cylinder can’t fail to impress.

Crosman describe the grips as having a faux ivory finish, and whilst they do the job, this is the one area which could be improved. In short, the Cowboy deserves better grips, easily elevated with just a small amount of definition or decoration. But that’s the nit picking over. As it stands, get this revolver in your hand, and it just feels spot-on.

The Cowboy is a single-action mechanism, and is powered by 12-gram CO2 capsules, that fires .177 pellets or 4.5mm BBs. Crosman provide two sets of six dummy shells; one for each type. After close inspection, the only difference I could make out was the stamping of a pellet symbol on the lip, or ‘4.5mm’ on the BB ones. Each cartridge is initially loaded with either a pellet or BB pushed into the rear. The loading gate on the right-hand side of the frame is pulled down to open. The hammer is pulled back one click to half cock position to allow the cylinder to rotate, so they can be dropped into each chamber. When fully loaded, shut the gate and you’re ready to fill with gas.

The CO2 capsule is easily installed by removing the grip plate, now pull out the Allen key, and slacken off the bolt at the base of the frame. Insert a 12-gram, then gently tighten it down until a small hiss is heard as it’s pierced and seals. Replace the key and snap the grip back into place.

To fire, pull back the hammer to its fullest extent, and this will cock the action and set the trigger. I’m no fan of BBs, due to their alarming propensity towards ricochets; so, I decided to use lead pellet only. If you opt for them maybe, consider safety glasses!

Firing reveals a reasonable trigger pull with a mild and consistent release, which only adds to the performance. Since the Cowboy was supplied from the importers with some Crosman Premier Hollow Point pellets, it was only polite to try these first. Yet as high quality as Crosman’s own ammunition is, the high antimony content used, is known to result in a harder product overall. This suits many guns, but my initial groupings of three inches over 10yards seemed disappointing; and the ultra-tight fit of the pellets into the lip of the shell seemed less than ideal. Switching to a softer make seemed the logical thing to do, and after priming another couple of sets, this time with some Umarex flat heads that I happened to have lying about, down-range results dramatically changed.

¾” groups c-t-c at 10yards, from a rest, was much more like it, and fairly easy to achieve too, and whilst the open sights, which are an integral part of the pistol body, are nonadjustable, when shot at full power, the impact point seemed commendably central. A neat sight picture created by the wellproportioned notch and blade, is a big help. There’s an integral ejector rod on the side of the barrel, but it’s easier to open the gate, tip the muzzle up and the shells will fall out.

There’s also a small safety catch at the front of the trigger guard.

As for power output, initial velocities in the region of 377 fps dropped by 50-60 fps after 50-shots. That said, the Sheridan Cowboy is primarily a fun piece, designed to feel good in the hand, and to expect match performance is surely to miss the point! With a ready supply of CO2 capsules and suitable pellets, I don’t think you’ll be disappointed. 84-shots on test before a big fall off in impact, gives plenty of action time, and lining up some tin cans in a safe range, is probably the way forward! As stated though, good accuracy is possible from the top end of the charge.

Let’s face it, at the end of the day, Crosman excel at producing fun airguns, with much of their target audience being beginners and youngsters, out to enjoy their shooting experience with no great expectations. Yet the Sheridan Cowboy goes further, crossing the line with confidence. Nicely made, satisfying to operate, and overall just great fun to shoot. It took me totally by surprise, for its sheer authenticity, and quality of manufacture, and as such, comes highly recommended.