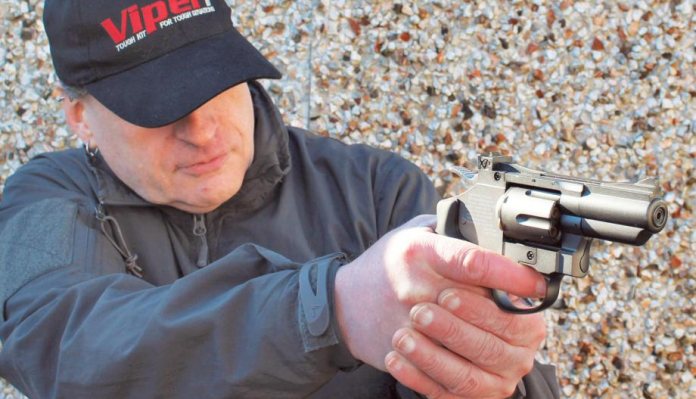 The US based Crosman Corporation have long been involved in the production of CO2 powered airguns. A brand name that’s become synonymous with the word quality of what they offer in this sector, which has now grown into a very comprehensive range of both rifles and pistols. That nicely brings me to the pistol here on test, the Crosman SNR .357; a revolver, which in looks and operation, is very similar to the iconic .357 Calibre Smith & Wesson Handgun. The use of the prefix ‘SNR’ indicates it’s of a style known as a ‘Snub nose Revolver’, which ‘handgun’ aficionados will know is due to it having a very short barrel, resulting in the ‘giveaway’ stubby front profile appearance.

The Crosman SNR .357 has an all metal construction, and in use this ‘felt’ weight adds to the ‘realism’ that you’re holding the ‘real deal.’ However, it’s not only the weight that gives you the feel of authenticity but also, it’s undeniable similarity to the firearm it so obviously replicates. Also, like the ‘original’, the ergonomic ‘combat style’ grip is an ideal complement in both ‘texture’ and design to the body. This superb ‘handle’ is made up of two parts; the forward section including part of both sides are rubberised with well-defined finger ridging at the very front, while the synthetic rear casing that it mates up to (more on this later) has full wrap around very fine stippling. The open sights consist of a quite broad, raised foresight blade and a fully adjustable rearsight unit, the width of the former lining up ‘nicely’ in the rearsight’s square ‘sight notch.’ The trigger mechanism works in single or double-action mode and has a thickset and wellappointed blade, which offers a good level of control over shot release. The trigger also shows itself to be a smooth operating unit, with quite a light let off; a trait that owners will soon appreciate, as a trigger such as this is a godsend on a pistol of any type.

The well-sized hammer has an aggressively ridged upper edge, making it easy to operate with the thumb while holding the grip when you want to shoot in single-action mode. Also, the stainless-steel catch on the left-hand side of the frame, above and between the grip and trigger, not only acts as the cylinder release catch but has been designed so that it also has several other practical functions. This is due to it being a three-position ‘slide catch’, which allows you to initiate the trigger safety mechanism. In the mid-position, the pistol is in ‘F’ fire mode and when slid fully rearward is on ‘Safe.’

The revolver takes power from the now familiar 12-gram CO2 capsule (Powerlet) and like many other makes and models of ‘gas’ pistol, the ‘bulb’ is housed in the grip. To install, you pull back the rear synthetic section of the grip, which when opened rearwards exposes the capsule housing. A nice touch is that the rear section remains attached to the mainframe on a hinge but is free to articulate away, so it doesn’t hinder access when you need to top up the gas.

Capsules are inserted and sit flush with the bottom of the capsule positioned squarely on the internal disc shaped base. This ‘retaining/load up disc’ is attached to an externally operated toggle screw that when tightened results in the installed 12-gram CO2 bulb being pushed up onto the valve probe, so that it pierces the top, so that gas flows into the action when you fire a shot. Once installed, simply slide the rear section of the grip back to its original closed position, upon which it clips positively back to the forward section.

Now to the nifty and very realistic dummy cartridges, which enable it to have a ‘dual ammo’ capability because the pistol comes supplied with a total of 12; six of which are designed to hold .177 calibre lead pellets, while the others hold 4.5mm BBs.

It’s easy to visually differentiate which one’s hold which ammo; as although both are hollow (which allows the passage of the chosen projectile and of course the propellant that drives it down through the cartridge to send what it holds down the SNR’s titchy barrel. The reason I use the word ‘visually’, is because the ones for BBs have a brown synthetic head, sized to allow a 4.5mm Steel or lead BB to be pressed into the top, while dummy shells for pellets are of a full brass construction and the pellets are loaded from the rear. Here, they’re held snugly in place by a seal around the aperture that you press the pellet into; likewise, the synthetic head on the BB specific cartridges is equally secure.

Removing them after use is even easier; operate the cylinder release catch, swing the cylinder back out and as most do, either simply point the front end up at an angle, so that they fall out into your awaiting ‘cupped’ hand, or, as the pistol is installed with a realistic cartridge ejector rod, you can use this mechanism. It can be seen externally as it’s the stainless-steel bar that can clearly projects out from the front of the ‘drum’ to the left of the pistol. The operation of which requires you manually press the rod in from the front, which lifts all cartridges out of the chambers’ utilising this feature obviously gives an even greater feeling of authenticity, as you pick them out one by one using your thumb and forefinger.

As this isn’t a precision Match target pistol, most users will (as I did) set up a few simple targets at approximately 10-yards from a shooting position. Granted, that’s not far, but though ‘gas’ powered replica pistols look the part, they’re very low powered. However, power isn’t an issue for those who use these guns, as the attraction and challenge is to shoot accurately and safely but moreover having fun in the process. In that respect, the Crosman SNR .357 is a very attractive proposition for those looking for such a pistol and if you do, you’ll certainly use it a lot. Even upon drawing a bead on the first target, you’ll immediately notice the SNR handles and balances very nicely indeed and feels solid in the hold, thanks to those ergonomic grips plus the all metal construction stabilises and helps steady your aim. The open sights, though looking quite basic, ‘pair up’ together very well, to create a very quick and easy to use sighting system for a pistol of this size.

The trigger is a standout feature, as it releases each shot predictably and very smoothly. You’ll certainly appreciate this trait when taking more studied shots in single-action mode and especially in double-action’, rattling off the shots ‘fast-fire.’

As I’ve had the pistol for test a while now, the accuracy in ‘D/A’ mode might surprise some CO2 enthusiasts, as it’s capable of making sub 1½-inch groups with both ammo types; CO2 spinner targets do loops and empty baked bean tins go tumbling! When I decided to discipline myself and apply a more considered shooting technique (and of course having the pistol in single-action mode) I was eventually making ragged ¼-inch groups on paper at 8-yards.

The Crosman SNR .357 is a solidly built, fist filling, accurate, realistic looking and in many ways similarly functioning look-alike CO2 revolver that will endear itself to both hardened enthusiasts and even the most casual ‘gas’ gun toting plinkers amongst us.