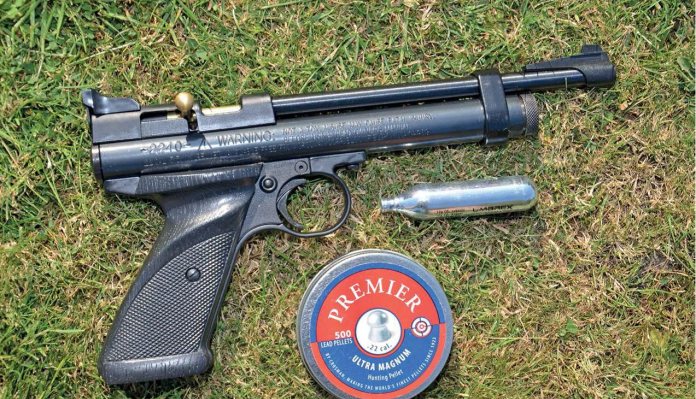 I’ve always had a soft spot for the American manufacturer, Crosman, ever since using a few of their products as a youngster, and the modern operation, now under the umbrella name ‘Velocity Outdoors’, continues to thrive. Output from the factory is huge, and whilst their products may not be the most sophisticated, they really are specialists in no-nonsense fun.

On show here is a pistol which to me epitomises the brand, and it’s difficult not to be impressed with the robust design and down range performance. One of my all-time favourites from the Crosman stable is the American Classic, multi-pump pneumatic pistol, and with the model 2240 on test here, sharing largely the same grip frame, bolt handle, trigger and safety catch, there’s a welcome familiarity for sure.

Where the American Classic generates its own power, the 2240 relies on a 12-gram CO2 capsule to power the action, and for many, the effortless shooting that that allows will be a big lure.

Supplied in a colourful blister pack, as with other Crosman pistols, this model may look cheap (almost toy-like), yet break open the packaging and grip the pistol for the first time and a classic combination of weight, build quality and sleek design come together well. Admittedly, the foresight, rear sight and grips are plastic, but a cast frame and steel cylinder mean there’s enough metal to feel nice and solid in the hand. 1.7lbs in weight to be precise. Factor in the relatively long sight base and the credentials are stacking up nicely.

So let’s get to it and ‘gas up’ the system. A simple operation to be fair, since all it takes is to unscrew the knurled metal cap at the front of the cylinder, then drop in a 12-gram CO2 capsule neck first, then replace the cap and tighten it hand tight. You may or may not hear a small hiss as the capsule is initially pierced, and gas enters the mechanism. Thereafter, you’re good to go for 40-50 shots.

The 2240 has a rifled steel barrel and is designed to shoot pellets, which I vastly prefer to BBs, given their propensity for ricocheting. Cocking the small brass lever takes little effort and the pellet just needs dropping and rolling across the loading channel. Push the bolt home and the shot is ready. Ambidextrous grips are the order of the day, yet despite their ‘plasticky’ feel, the actual shape (contoured and supportive, with finger/ thumb groove) means there’s above-average handling and good looks into the bargain. This pistol goes off with quite a crack as it happens, but it’s a satisfying sensation. The trigger pull is reasonable and I like the setback blade, even if it is fairly narrow.

Time to zero, but here, I found the sights ran out of height adjustment, so I still had to aim 2.5” low at 10 yards. A tiny screwdriver is required to alter the height of the leaf element (I used one from a spectacle repair kit) and you can also switch from a notch to a peep sight. Switching to the peep didn’t get the point of impact any lower for the record. I’ve had this before, with the American Classic from Crosman as it happens, yet it’s not a deal-breaker. This is primarily a fun pistol after all. Shoot over a greater distance and the zero will close slightly, but aiming slightly low is no big deal, and the target is then visible too.

So what of the performance on offer? Well, once I settled on where to aim, and from a rested position, groups of less than 3/4” over 10 yards were relatively easy to come by.

As with any CO2 airgun, just how many shots you get from a capsule is dependent upon several factors. What sort of pellets you use will affect the outcome to a greater or lesser degree, but the temperature on the day can also affect results. Ultra-cold conditions will mean fewer shots will be on offer and occasionally being clumsy while gassing up, where the cap isn’t tightened quickly enough, can result in some lost volume.

On test though, my 2240 performed largely how I would have expected. Full pistol power of 5-6 ft/lbs is on the cards and this registered at the high point of the charge. Chronograph figures aren’t so relevant with this type of general-purpose model, but for the record, they were actually quite impressive. I opted to use Crosman’s own Premier Ultra Magnum pellets in .22 and recorded a total velocity spread of just 15 fps over the first 30 shots. This jumped to 82 fps over 40 shots, but for fun shooting, expect around 50 usable shots in total. The cross-bolt safety is there to use if required, but the fact it’s manual suits me just fine.

Overall then, I suspect it’s detectable that I approve wholeheartedly of the model 2240! It looks classic Crosman and it feels and shoots like one. The main negative has to be those plastic grips and it’s the same conclusion I came to with the American Classic. This pistol warrants better grips, preferably wood, so make it a simple DIY project further down the line. UK importers, Range Right are currently offering this pistol as part of a ‘Pro Kit’, which consists of the 2240 pistol, a red dot sight, powerlets, hard case, oil, pellets and a silencer. All in for £180.

As its stands, the CO2-powered 2240 is still great value, pistol only. Satisfying in the aim, highly capable, versatile and durable in equal measure.

Thanks to Range & Country Shooting Supplies in Sleaford, Lincs., for the kind loan of this pistol for test.