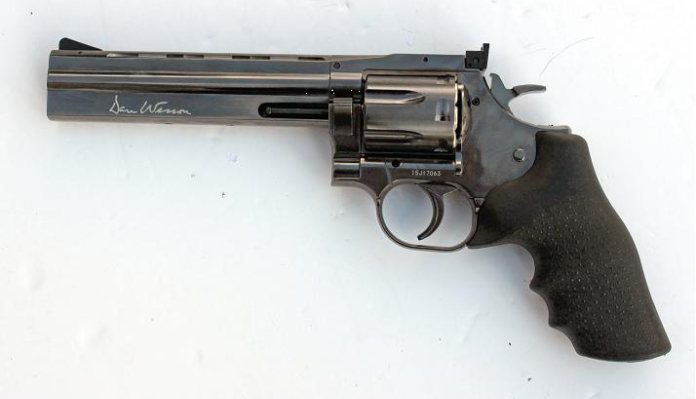 I come from a time when we could own real handguns, and considering revolvers, names like Smith & Wesson and Colt were the top choice of shooters worldwide. Sadly for we British, those days are largely gone, unless you want to have a darn great long barrel and a coat hanger hanging off the back of your beloved handgun. Unless of course you look to a replica CO2 model. For many shooters it’s all about revisiting those lost days of Practical Pistol that really drives them, and a decent gas-powered replica is certainly one solution!

The fact is that if you’re over 18 you can legally purchase and own virtually any action air model of handgun you can think of! SIG SAUERs, Colt 1911, Beretta and the list goes on. You can even get custom built race guns with all the whistles and bells on. So in many ways equipment of this type fills a need and also scratches an itch too!

Although I have owned a couple of CO2-driven pellet revolvers in my time I’ve always found them a little uninspiring. They work right enough, but have generally been underpowered and the overall construction left them with a very poor feel in the hand. Plastic moulded imitation wood grips didn’t really set my world alight either and you couldn’t change them as the gas capsule storage was usually tucked away within. I was also wary about trying to holster them as they felt fragile; things of beauty to look at, but far from practical.

That all changed when I first saw the range of revolvers offered by Action Sport Games (ASG). Founded in 2003 from a merger between two of the largest Danish distributors of replica guns and accessories, ASG has just grown and grown, and it’s always a pleasure to visit their mammoth stand at any of the shows. They have become a true world leader, especially when it comes to properly licensed reproductions from many of the real firearms manufacturers.

On test is a CO2 revolver modelled after a perhaps lesser know US manufacturer – Dan Wesson. However the real product was of high quality and innovative design and offered a quick change barrel system; an unusual feature at the time!

THE WONDERS OF WESSON!

Dan Wesson Firearms is now a part of CZ-USA. Daniel B. Wesson II himself was the great-grandson of one of the founders of the Smith & Wesson Company where he worked from 1938 until 1963. When S&W was bought by Bangor-Punta, Wesson set out to open his own operation to produce high quality, American made revolvers for service and competition use. The first pistol was the Model 12 chambered in .357 Magnum. The success of the .357s series coincided with interest from hunters and competition shooters, and the company expanded their range to other models and calibres.

Dan Wesson Firearms is still a trusted name in the shooting industry and is synonymous with quality, finish, and accuracy. So it’s perhaps not surprising that when ASG wanted a brand to work with for their range of CO2 revolvers, Dan Wesson would have been one of the first to approach. Especially and given the fact that they have a great relationship with CZ; luckily for us both parties were able to agree on licence terms.

What came from this is a range of 20+ revolver models (both 4.5mm air and 6mm airsoft) bearing the Dan Wesson name, in various finishes, with barrel lengths of 2.5, 4, 6, and 8”. The two extremes of this might well be for the collectors rather than the shooters (I do own one!), but the 4 and 6” guns are absolutely ideal for a bit of practical revolver work.

On test is the newly launched Dan Wesson 715 and what a beauty it is! The .177” calibre air pistol version is accurately based on the real DW715 revolver. In the words of CZ-USA: “It’s designed and built to be the most accurate, rugged and versatile revolver on the market.”

What turned up from ASG was an extremely attractive revolver with a 6” barrel; each pistol has its own unique serial number, which is also a nice touch. Whilst the polished, deep-grey finish might not appeal to everyone, for a range gun it works very nicely. Weighing in at a hefty 2.7lbs it feels good and solid, and resembles the real thing down to the smallest detail.

It’s really nicely balanced and offers a great combination of overall size and weight. Like many handguns of its type it utilises a 12-gram C02 capsule, which fits neatly into the pistol grip, and there’s even a tool incorporated to help fitting the gas cartridge. This is easily achieved courtesy of a cleverly designed mechanism, which allows the grip to be split, the capsule fitted, and then to be closed solidly. Once again, this does mean that you’re not going to be able to fit aftermarket furniture, but the issue grips resemble an ergonomic and stippled Hogue-style, so for me that wasn’t going to be an issue!

With the 12-gram fitted it was time to load up, and once again this is where a smile comes into the equation! The pistol comes with six metal shells of a new design, which allows you to easily load pellets into the rear of the base of the case, rather than having to unscrew the nose cone of the existing design. This is a neat touch as you can easily reload without removing the shells from the cylinder. Also included is a 6-round speed loader, extra shells are available as accessories in boxes of 25.

Just like the real thing, the catch to release the cylinder is situated not on the rear upper left of the frame, but in front of the cylinder crane on the left hand side. This functions smoothly, and allows the cylinder to swing out to the left so you can load. It snaps back and locks securely, and you really don’t need to be delicate with this revolver, as everything other than the pistol grip is metal. Just like the original the cylinder rotates clockwise!

With the shells loaded you are ready to go; I tried the pistol in numerous holsters designed for the real guns of the same frame size and had no issues with any of them. First stop as ever for me was the chronograph; power levels in air pistols are strictly regulated by law, but ASG have made this replica as powerful as possible, and the DW715 sends Diablo pellets out at a healthy 426 fps!

Typical of a modern revolver the DW715 offers both single (hammer cocking) and double action (trigger cocking) modes. In use you can you get rid of six rounds quickly if your finger is up to it! The trigger feels a little heavy in DA, but in SA it’s a dream. Accurate placement of shots and good groupings are possible thanks not only to this, but to adjustable rear sight and a clearly defined front blade.

There are pre-drilled and threaded holes in the underside of the barrel lug for a dedicated 715 Rail, which is available as an accessory in silver, black, blue and red) should you wish to fit a red dot sight. To me this would be overkill, as the pistol is beautifully accurate with the standard irons. I would say if you’re going to use the gun in practical-type shooting then buy some extra shells and a pouch for your belt and use the speed loader, otherwise you’ll be on one knee reloading for ever!

There is a rifled barrel version available but to my mind unless you are super-picky you don’t really need it as the pellets fly flat and true. I can only surmise that the rifled version might improve things a bit! For close-in practical disciplines this gun is going to be every bit as accurate as you need, and it really is just so much fun to shoot.

If you hanker after the olden days, when we had revolvers for practical shooting, then I really must recommend AGS’s 6” Dan Wesson 715 revolver, as in my opinion they have really outdone themselves in terms of quality and finish. I’d go as far as saying that this is actually one of the very best replicas they have ever made!