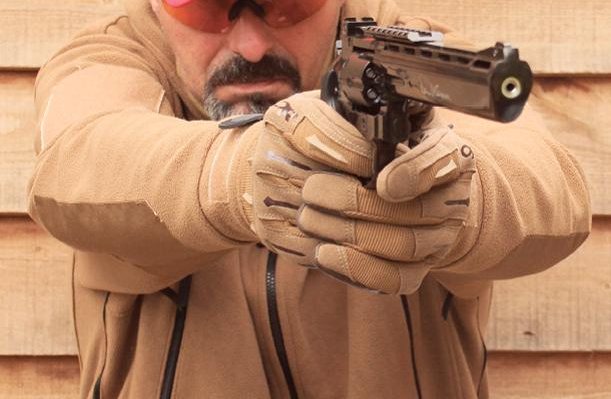 I have to admit that I have a very soft spot for revolvers as way back in the day when such things were legal as firearms, my local club made various models available for range use in .38, .357 and .44 Magnum. These were the revolvers that I saw in movies and TV shows and there was always something just a little special when these came out to shoot. Since then I’ve had the privilege of shooting numerous revolvers, and it’s always a joy to do so.

Sadly there are few opportunities to shoot a revolver in the UK these days, something I do hope to see change within my lifetime, but numerous manufacturers are doing their level best to provide us with replica spring and CO2 air pistols so that we can still enjoy our handgun shooting. Action Sport Games in Denmark have brought out some cracking models in the recent past, and thanks to Highland Outdoors we can easily access them. Given my appreciation of the humble ‘wheelgun’ I was overjoyed when one of the new Dan Wesson models turned up on my desk for review.

Founded in 2003 in a merger between two of the largest Danish distributors of replica guns and accessories, ASG has just grown and grown, and it’s always a pleasure to visit their mammoth stand at any of the shows, as they have become a world leader, especially when it comes to legally licenced replicas from many of the firearms manufacturers offered globally.

Dan Wesson Firearms, formerly known as Dan Wesson Arms, is now a part of CZ-USA. Daniel B. Wesson II himself was the greatgrandson of one of the founders of the Smith & Wesson Company where he worked from 1938 until 1963. When Smith and Wesson was bought by Bangor- Punta, Daniel B. Wesson II set out to open his own operation to produce high-quality, Americanmade revolvers for service as well as competition use. Having purchased a suitable building in Monson, Massachusetts (an old school house!), Wesson signed a production agreement with Karl Lewis and began setting up the necessary machining and manufacturing equipment.

The first pistol produced was the W12, or the Dan Wesson Model 12 which was chambered in .357 Magnum. Later, this design was refined into the Model 15. Further refinements to the model 15 resulted in the Model 15-2 which became the best-selling Dan Wesson model. The success of the .357 models coincided with significant interest from hunters and competition shooters, and the Dan Wesson company worked to expand models to encompass the calibres of .44 Magnum/Special, 32 H&R, .41 Magnum, .45 Long Colt, and later the Supermag cartridges and the 7460 model in .45 ACP/.460 Rowland/.45 Winchester Magnum.

Although Dan himself sadly passed away in 1978, Dan Wesson Firearms is still a highly trusted name in the shooting industry. His name has become synonymous with quality, finish, and accuracy, so it’s perhaps not surprising that when ASG wanted a brand to work with for their range of revolvers that Dan Wesson would have been one of the first to approach; luckily for us both parties were able to agree on licence terms.

What came from this is actually a range of nigh on 20 revolver models (both 4.5mm air and 6mm airsoft) bearing the Dan Wesson name, in various finishes, with barrel lengths of 2.5-, 4-, 6-, and a whopping 8-inches! The pistol received for testing was the ‘Hand Cannon’ of the range – the 8-inch barrelled version which on first look appears absolutely huge. Each revolver has a unique serial number, and the Dan Wesson logo on both the grips and the barrel, and the deep satin black finish is simply stunning. Other models are available in a ‘chrome’ finish which is equally attractive. Weighing in at 1040g (2.3lbs) it feels good and solid, and resembles a real Smith and Wesson but with a Colt Python style rib along the top; if you bear in mind that a S&W Model 66 is 1037g then the replica isn’t really far off the weight of the real deal!

The test pistol is really nicely balanced, even with the long barrel, and it offers a great combination of overall size and weight. Like many air powered handguns this revolver utilises a 12g CO2 capsule which fi ts neatly into the pistol grip; this is courtesy of a cleverly designed hinging mechanism which allows the grip to be split, the capsule fitted, and the grip to be closed solidly. Once again, this does mean that you’re not going to be able to fit aftermarket grips, but the grips fitted as standard resemble an ergonomic ‘Pachmayr’ style, so for me that wasn’t going to be an issue; that’s probably what I would have wanted to fit anyway!

Once the CO2 capsule is fitted it was time to load up, and once again this is where the smile comes into the equation! The pistol comes with six metal shells with a softer plastic material at the nose; to load you simply screw off the soft nose, insert a .177 pellet and then screw this back onto the casing. The casing itself is essentially a hollow tube which lets the air through when you pull the trigger. The box for the pistol also contain a six round speed loader, and extra shells are available as accessories; this is a real positive as trust me, you’ll want to buy more!

Just like the real thing, the catch to release the cylinder is situated in front of the hammer on the rear upper left of the frame. This functions smoothly, and allows the cylinder to swing out to the left so you can load your shells. A quick snap back puts it where it should be, and you really don’t need to be delicate with this revolver as everything other than the pistol grip is full metal.

With the shells loaded you are ready to go, though given the length of the barrel you may well struggle to find a suitable holster for this beast. Luckily ASG do a holster model specifically for this pistol.

First stop as ever for me was the chronograph and, boy, does the Dan Wesson deliver in this respect. The barrel is rifled for its whole length and testing with ASG Diablos showed a mean muzzle velocity of 442fps, a little higher than the 426fps that ASG quote!

This revolver features a full double action, and you can get rid of six rounds quick if your trigger finger is up to it. The trigger feels a little heavy in double action, but in single it’s a dream. Accurate placement of shots and good groupings are possible courtesy of the rifled barrel, fully adjustable rear sights and clearly defined front sight. There is a small section of rail included in the package should you wish to fit a micro red dot; this is swiftly and easily achieved using the clear instructions and an Allen key is also enclosed in the box; the longer barrel really suits the red dot approach, and you can set the revolver up in a similar fashion to those used for hunting purposes in the USA.

Pellets fly fl at and true WAY out there and I can only surmise that the longer barrel helps with this too; two inch groups are easily achieved at 30+ feet, and for close in practical disciplines this gun is going to be every bit as accurate as you need, and it really is fun to shoot.

If you hanker after the olden days when we had revolvers for practical shooting then I really must recommend the 8-inch Dan Wesson revolver from ASG. As I said, it’s a real handful, but as a handgun to shoot in the right situation it rightly deserves a place in anyone’s air pistol collection.