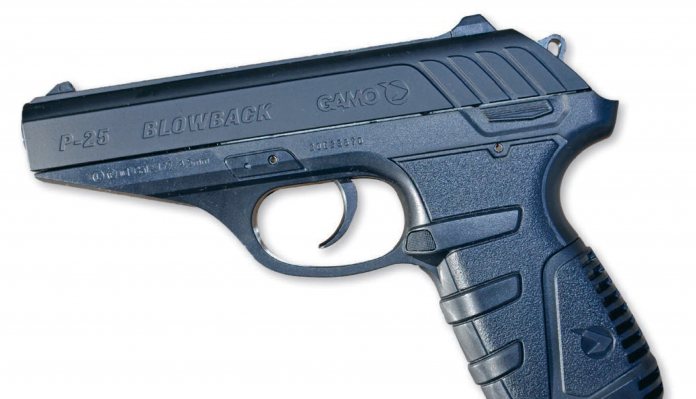 CO2 as a power source for airguns opens a whole world of fun, and it’s the fast-fire aspect that understandably, holds such appeal for many. Couple that with a large dose of ‘replica lookalike firearm’, and the imagination is well and truly fired.

On test here is a classic case in point, the P25 Blowback from Gamo. I have to say from the off, that it’s one hell of a pistol for the modest asking price, which is currently sub £100!

It is listed in the Gamo brochure as ‘Full Metal’ and is part of the ‘Heavy Weight Series’, so the P25 has a lot to live up to. Whilst the lower section is in fact one synthetic moulding, integral with the grips, the fact that the upper slide piece is metal, along with the trigger, adds enough heft to just feel right. All the moulded components feel refined too, so the overall impression is of a satisfying piece of airgun in the hand, with enough feel of its live counterpart to add that extra dimension to ownership.

So, before we can get to work, it’s time to prime the system. Power comes from one standard 12-gram CO2 capsule, and this neatly stows inside the grip. Prior to starting, it makes sense to be safe and apply the safety catch, which in the case of the P25, is indeed ultra-safe. A very stiff sprung clip is pushed to the rear, to allow the safety bar to slide down. It’s not an action that can be done in the aim, but it’s great to lock the system for maintenance.

The grip panel first needs to be removed, and this is a relatively simple task, but just requires a quick snap of the wrist, to pull the back of the grip and off. With the section of the grip removed, the tension bolt in the base needs the head folding out so the bolt can be slackened off. Insert a new capsule, head first, into the cavity, and gently tighten the bolt hand tight. You may or may not hear a hiss as the capsule is pierced. Fold down the bolt head to allow the grip to be snapped back into position.

Now we need to fill the magazine, which first needs to be ejected from inside the grip via the small button on the left side, at the rear of the trigger guard. The stick-style magazine has an 8-shot rotary mag at each end. Push a pellet headfirst into each aperture, clicking it round as you go, and with both ends full, the stick can be slid back inside the mag well, at the base of the grip.

On the range, with the P25 fully prepped, it was time to get stuck in. Given the inherent low power of this style of pistol, I would always recommend safety glasses, even though the P25 is pellet only rather than BB (which is far more prone to ricochets). The sights are fixed, but with positive white dots forming both the post foresight and rear sight notch, the end result is a pleasing, precise sight picture, that adds to the enjoyment on offer.

Get in position on the range, maintain a comfortable grip, and shots can be released just as fast as you can pull the trigger. Semi-auto action then, and as the P25 fires, the ‘blowback’ part of the name instantly becomes apparent, as the top slide moves back and forth as part of the firing cycle. This sensation, along with the gentle bounce of the pistol, adds a real feel to the session, and it’s hard not to be impressed by the performance. Nothing is harsh, and the comfortable, metal trigger blade feels spot on. The trigger is double-action only but I found for more deliberate shooting, you could squeeze through the first stage, and just a small further squeeze would release the shot.

But to expect too much and be too staid in approach with this model, is very much to miss the point. For fun, fast shooting is what the P25 is all about. Rattle off 8-shots, eject the mag, turn it to the other end, snap it back inside, and away you go again. The rate of fire can be super fast too, and to give some idea, the manufacturers claim 8-shots a second! I reckon I managed 5 or 6, but that’s still pretty amazing!

Energy figures are as usual, pretty academic with this type of airgun, as emphasis shifts from sterile performance to the experience overall. For the record, the charge, at the start of a fresh CO2 capsule, recoded in the region of 2.2 ft/lbs energy and you can expect around 40-shots from a charge. This figure will obviously vary, depending upon temperature (a vagary of the CO2 medium) and pellets used.

Accuracy on test, whether shot from a rest or freestyle, seemed similar, with groups at 10 yards around the 2.5” mark. Consider the bottom of a tin can, indeed use that as a target, and you have some serious fun on tap!

One final piece of advice has to be to keep the cleaning rod set handy (available for just a few quid), as this can be the ultimate saviour when a pellet gets jammed in the barrel. This will almost inevitably happen at some stage when power runs out at the vital moment!

In short, this P25 Blowback is a really nice little pistol, well made and exciting and fun to shoot, in equal measure.