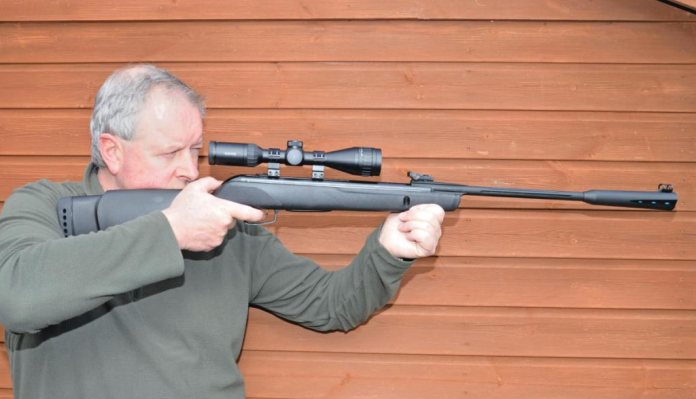 Our modern airgun scene is an energized place to be right now, yet whilst we are undoubtedly spoilt with a multitude of designs waiting to tempt us at the local dealer, I genuinely find the lure of a break-barrel hard to beat. Perhaps it’s the pressure of testing a flurry of super high tech models, where expectations can be unrealistically high. Or is it the lack of procedure and fuss? Either way, the sheer simplicity of the time-honoured break-barrel configuration still holds huge appeal for many airgun enthusiasts the world over.

Many of us cut our teeth, so to speak, with this system in one form or another, yet the humble break-barrel is so much more than just beginners fodder. Spanish outfit Gamo has made their name originally with spring power and their current lineup carries many models along with IGT gas-ram derivatives. Indeed, a quick perusal of their main website soon revealed that there are just two fixed-barrel models against 20-odd break-barrel offerings! OK, admittedly importers BSA only bring in a selection to the UK market, but that ratio, massively in favour of the breakbarrel configuration, is testament indeed to its enduring appeal.

On test here is the Gamo Whisper Sting, and it’s a classic example of what this manufacturer does best. At 6.6lbs, this model can be considered a lightweight and it soon becomes apparent just why that is. The most obvious factor is the black synthetic stock, and here, despite the ‘ambi’ credentials, the design offers a nicely defined cheek piece, plus a well-shaped and angled grip. Plastics/ polymer is also used for the cylinder end cap (rather Airsporteresque), trigger blade and guard. Move to the front, and you’ll notice that not only is that muzzle moderator/foresight assembly synthetic, but so is the barrel casing/shroud and breech block! A step too far? Well no. I’ve encountered the moulded breech arrangement on other Gamo’s and all I can say is, it’s manufactured to a pleasingly high level and in operation, it just works a treat.

Open sights are fitted as standard here and on this grade of airgun, that’s always welcome. They’re of the fibre optic variety too, meaning the sight picture is highlighted and effectively formed by coloured elements, and I would go as far as to say they are excellent. The foresight is protected by a small metal hood, whilst the fully adjustable rear sight is super robust, being of all-metal construction. Experiment with these sights first in any circumstance and I’m sure you’ll be amazed at just how accurate you can be.

However, most shooters are lured towards glassware these days and with ever more affordable options to play with, that’s hardly surprising. Having spent time with this Whisper Sting, I can vouch for the fact that its performance is such that it would be a crime not to exploit it to its full potential. Fitting a scope here is easy too. The compression cylinder is a good length on this model and that means that correspondingly, the scope dovetail rails are extensive. Plenty of mounting space then, and with the inclusion of a neat factoryfitted arrestor block, any concerns regarding the dreaded scope creep, can be shelved. Just set up the rear mount, nudged against the block, and all should remain secure. Just ensure that any scope selected, is compact enough so as not to foul the breech area, as it travels through its arc of movement.

Cocking the action reveals a perfectly weighted breech set-up and release, and the downwards compression stroke itself is relatively easy and incredibly smooth. This is hardly surprising given the excellent leverage afforded by the extended synthetic shroud and integral muzzle assembly. Pushing a pellet home, directly into the barrel is always satisfying, and my test model had just the right amount of feel as a variety of pellets connected and thumbed home flush before the barrel locked home and closed.

The muzzle assembly here is indeed a sound moderator, and what Gamo terms ‘Whisper ND52 Technology’. The configuration sees the rifled steel barrel sitting inside a polymer outer shroud or jacket, with the large fluted section containing a few baffles inside. The end result is claimed to reduce the muzzle report by up to 52% (hence the name), but don’t get too excited. As with many of these devices, taming the output of a spring-powered airgun is never as starkly impressive as with a PCP, given the different way the air pressure dissipates. Plus, mechanical noise of the action/piston and spring, so often trump any token attempt at suppression at the muzzle.

That said, the Whisper Sting on test proved slick with regards to the firing cycle, and whilst maybe just a little harsh in feel, there was certainly very little spring resonance through the shot. Neither especially noisy or quiet then, to be fair. As for the trigger, I was pleasantly surprised and whilst this model doesn’t seem to come with any trigger label, such as ‘Custom Action’ or ‘Smooth Action’, all I can say is forget the slightly silly jargon and be rest assured that it works rather well. The blade is as mentioned, plastic, but is so well shaped, being fairly wide and flat-surfaced, that it feels good in the aim. Admittedly, there was a small amount of creep on test but gently hit the second stage, pull through the initial creep and the final pull weight is perfectly reasonable.

Accuracy on test was genuinely impressive and my .22 example, using Crosman Ultra Magnum pellets and shooting from the classic FT over-arm sitting position, produced proper ragged holes of sub 3/8” c-t-c at 25 yards. Moving to the chronograph test, and whilst power was modest at 10.2 ft/lbs, consistency was again eye-catching. 10- shot strings with a total spread of just 7 FPS is about as textbook as it gets.

Seriously competent results then, and enough to make the Whisper Sting a confidence-boosting goto rifle, for no-nonsense breakbarrel sport. It’s well up to hunting duties and even worth a dabble in springer class HFT, if my test gun’s performance is anything to go by.