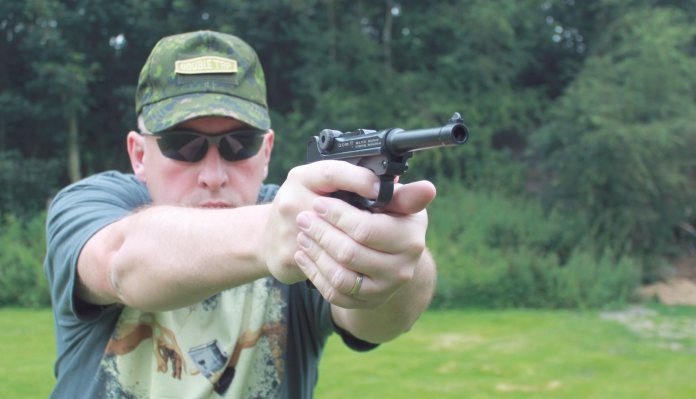 There are many guns that have iconic status, and the Pistole Parabellum 1908 patented by Georg J Luger is one such gun. This semi-automatic pistol has a unique toggle action, and was used by Germany in both world wars. Universally known as the Luger, the 9x19mm Parabellum cartridge was developed for the pistol after it was first produced in 7.65mm Parabellum.

We now have several CO2 BB-firing reproductions of the famous Luger on the market and this Gletcher version is one of them. Brought into the UK by FSU Connections, it is called the P08 rather than Luger and is produced in the USA by Gletcher Military Precision. This particular Luger-type CO2 pistol is the one I wanted to get my hands on as it has a blowback action which mimics the real Luger’s toggle action. A call to Lloyd at Blackpool Air Rifles saw a P08 heading to me in deepest Yorkshire.

The Gletcher Luger P08 is heavy and well-constructed in metal and plastic. The gun takes an industry standard 12 gram CO2 bulb in the sharply angled grip. The right-hand side grip panel is finished in a light brown colour with the distinctive deep diamond checkering pattern as seen on real Lugers. The overall finish on the gun is like a parkerised brown/grey. The right-hand grip panel has to be taken off to install the power plant, it has a false screw at the bottom to mimic the real Luger but the grip side is held on with a spring clip, a groove in the rear of the metal grip body allows the side to be plied off. To fit a CO2 bulb you have to also take out the magazine to uncover the Allen screw for piecing the bulb. Gletcher supply a stubby 4mm Allen key for this purpose.

The base of the gun’s BB magazine has the round dished button at the bottom that the real magazine also has. The mag slides up the front of the grip and has a spring loaded plunger to hold in 21x 4.5mm steel BBs. You can lock down the plunger to aid loading, a finger placed on the back (or front) of the hole as you feed BBs in is needed. There is a knack to loading the magazines, but it is easily learnt. You can get spare magazines for the P08, they cost £26 and you really do need a spare magazine to get the most fun out of CO2 pistols as magazine changes are for me what they are all about. Another good thing is that you can actually get them; many CO2 pistols are sold over here with no real way of getting extra magazines.

The magazine catch is on the left-hand side of the action behind the trigger, it has a steeply angled face and is a bit fiddly to operate, so quick magazine changes are not really possible with the P08. One thing I do like about the magazine design is the fact that you cannot get the magazine the wrong way around in the gun, it will only slide into the front of the grip if the button base is to the rear.

The toggle action of the gun really does make it unique, especially as the gun is also a blow-back CO2 pistol, meaning the action cycles back as a real firearm would upon firing. The gun does move in your hand when firing, and the rear sight is a notch on the back of the moving toggle mechanism. This of course means you lose the sight picture as the toggle comes up. The fixed vee notch has no adjustment, whereas on the real Luger you could move the front post sideways on a vee block system. On the P08 the front post is a fixed part of the casting, but, saying that, I found I could hit what I was aiming at very well with the Gletcher.

Under the front post the barrel itself is recessed into a faux section of rifling made to resemble the real 9mm barrel. The trigger pull on the P08 is double action only, this makes it quite heavy at just over 4kg. The trigger’s blade itself is the same as the real gun, a 3⁄4 circle tucked snuggly into the circular trigger guard. With the angled grip the trigger finger sits perfectly on the trigger, Georg certainly knew a lot about ergonomics. So much so that Sturm Ruger also went for a 55 degree grip on their famous Mk1 pistol.

The gun has a manual safety catch on the rear left-hand side of the action, this is very easily operated by the thumb of a right- handed shooter. In the down position it is in the safe mode and shows a larger circular white dot above the word ‘GESICHERT’, meaning Safe in German. Moving the lever up covers over the safe word and the white dot to reveal a red dot – this means the gun is ready to shoot. The safety blocks the operation of the trigger.

Gletcher have even moulded in a loop for a strap at the very rear of the action as the real Luger’s had. The attention to detail Glecther has gone to is worth mentioning, including the raised T section on the base of the grip where butt stocks were attached.

Over the chronograph the gun gave me 42 shots, or two magazines worth, half way down the third magazine the blow-back toggle action stopped working as the gas ran out. The relatively small number of shots is a price you have to pay for having the ultra-cool realistic toggle action.

At six yards the 200mm long sight base and fixed sights gave me groups under an inch, which is fine for plinking – this is not a match gun and does not profess to be. What it is, is a well-built quality CO2 BB pistol based upon an iconic firearm which now everyone can enjoy shooting.

Many thanks to Lloyd and all the staff at BAR for their help in the production of this article.