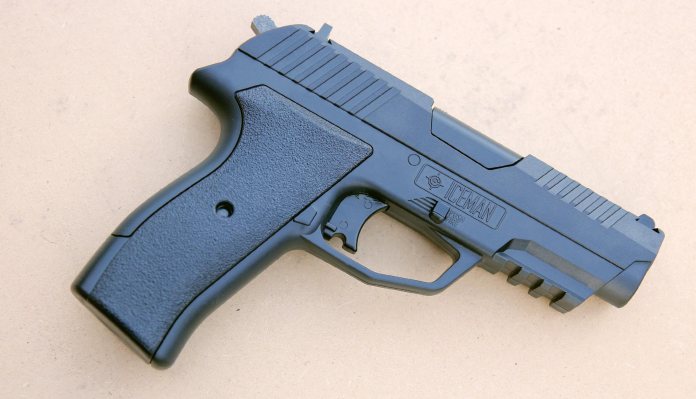 Crosman’s Iceman pistol seems to have come out of the Ice Age in terms of what it offers, certainly in comparison to the more modern, gas-powered air pistols these days. But let’s not forget this general design was very popular when they first started appearing, as they offered a realistic and well proportioned faux handgun, that were eagerly taken up by many shooters!

Looking at Crosman’s catalogue shows 13 different CO2 pistols, all running on the prolific, 12-gram bulb, which is still a cost effective power source. The Iceman adds another choice and admittedly is similar to the majority of the other ‘real gun’ look-a-likes in their considerable range, the majority of which follow a semi-auto style layout.

Despite the generic, L-shaped build, under the skin the Iceman is in fact a revolver, with the cylinder/magazine inside, as opposed to out. It is also capable of firing both steel BB’s as well as regular lead pellets from its .177”, rifled steel barrel. The action offers both double and single action operation; the former means that pulling the trigger cocks and release the hammer, the latter requires the hammer to be thumb cocked for every shot. The upshot being double action is faster but the gun moves about in the aim more as you pull through, single is slower but offers greater accuracy potential.

The barrel sits in a hinged plastic housing that is located in the top of the slide, which facilitates loading. To remove the magazine; push forward the catch at the rear of the dummy ejection port and the barrel assembly will spring up. The 8-shot plastic cylinder is pulled off the spindle and pellets or BBs are pushed into the individual chambers. Then it’s relocated and the barrel closed and locked.

Power comes from the 12-gram CO2 cartridge, which is located in the grip. Both grip panels are pulled off and the tensioning screw at the base of the frame undone. The bulb is pushed in neck-up to locate in the seal at the top. The screw is then wound in to position it and final pressure pierces the top, so gassing up the system. You are now ready to go!

The build is near all plastic with a lower/forward Picatinny rail moulded in that you can fit lights or lasers to. The only two controls are the cross bolt safety above the trigger guard, which pushes right to left to fire and reverses for safe, the trigger offers a short and reasonable pull. Sights are basic; the front is fixed, as is the large U-notch rear.

Using 7.9-grain, 177 pellets velocity is in the 400 fps area, so produces a very modest 3 ft/lbs, BBs are a bit quicker! In single action, the Iceman was shooting about 2-3” at 10 yards and was returning about 35-40 shots per 12-gram. Though light, it’s a decent handful and at the end of the day is what it is and would suit youngsters and learners and at well under £100 is a bargain!