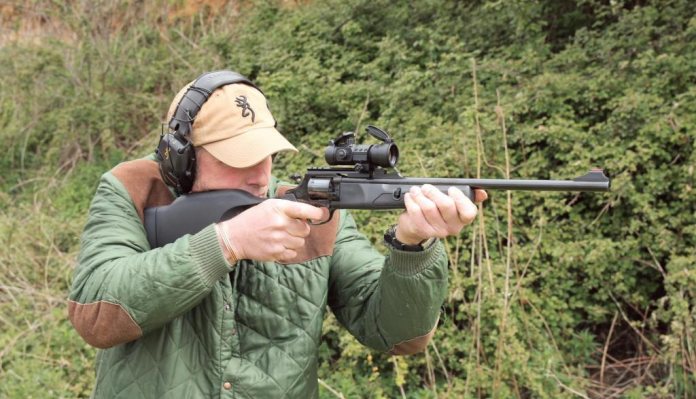 I try to keep my finger on the pulse of things and usually I manage to do so, but this item completely slipped under my radar! The Rossi Circuit Judge is, in UK terms, a revolving carbine based around their standard, centrefire double action revolver but chambered for 22 rimfire; sounds interesting. But there’s more, as it comes with two cylinders as standard; one for 22LR (Long Rifle) and the other for the more potent 22 WMR (Winchester Magnum Rimfire). Investigation showed they also do a 45 Colt version, with an over-long cylinder that will accept .410 shotgun shells too.

Cleverly, to counteract the rifling twist with a shot shell, this version has an external (screwon) slotted choke tube that straightens up the shot column as it exits the muzzle. This model and its full bore chamberings seem to have gone down well in the USA, as it offers an interesting hunting combo, with the 45 Colt being good enough for deer too. Currently, the 45/410 version is not shown on Highland Outdoors’ website, but I think if nothing else, the 45 would appeal to Actiontype and longer range pistol shooters if it became available.

The build is the standard double/single action (D/A & S/A) swing-out cylinder of a modern wheelgun design, though carbineised with an 18.5-inch barrel and a twopiece polymer stock with a sliding forend (more of that later) and a thumbhole butt. In the UK, where we have had to adapt to the dictates of the handgun ban of the late 1990s, with hybrid guns that must conform to specific physical criteria, the Circuit Judge adds to this pool of equipment.

As it stands, its long 18.5-inches tube and overall length of 36-inches falls well within the minimum barrel/overall length remit of 12/24-inches accordingly for the now required Large Firearm description demanded by law of any Sect 1 firearm in the UK. In fact, it leaves room for manoeuvre, as it would not take much modification by a gunsmith to remove the butt and add a fixed extension rod to increase the overall length to over 24-inches and then to reduce the barrel length to 12-inches and in that it would make an interesting and useful long barrelled revolver (LBR). Especially as it’s a 22 rimfire, so offering something currently not available in a wheelgun chassis.

Both 22LR and 22 WMR cylinders offer a generous 9-shot capacity. A pushforeword catch behind the left-hand shield releases the cylinder, which swings out to the left, exposing the individual chambers for loading. Unloading is accomplished by opening the cylinder and raising the barrel, then pumping the ejector rod at the front of the cylinder. This then simply pushes the star-shaped ejector plate down, and in doing so, the rims of the empty cases and out of the chambers.

Calibre change-over is accomplished by pulling down on the catches either side of the forend and sliding it forward. In this position, open the cylinder and press the button on the right side of the frame at the front of the trigger guard and pull the cylinder, complete with its crane, (hinge, axle and blast shield) forward and off. Reinstall in the reverse order, it’s but the work of a few seconds!

A feature of any revolver, is the fact that there’s a small air gap between the cylinder face and the rear of the barrel (forcing cone), which is essential to allow it to rotate easily. This then causes some side blast of gasses and even bits of bullet material as the bullet enters the forcing cone (spitting). In carbine format, with your head near the frame, this can be quite noticeable, also on your supporting arm, which is forward of the cone. For this reason, the use of safety glasses, as with any firearm is recommended, which you should be wearing any way! The forcing cone is essentially a chamfer cut into the rear of the barrel face, to help guide the bullet into the rifling. But Rossie have gone a step further, as they have opened up the cone to .38-inch diameter and bored it in for an inch, to doubtless give the bullet more clearance to enter and reduce side blast. Also, they have fitted blast shields left and right, to divert anything that escapes too.

Being a revolver, the Circuit Judge has no safety catch and to be honest a D/A wheelgun doesn’t really need one either! However, Rossi has fitted a locking system; at the rear of the hammer is an Allen screw and winding it in blocks the hammer movement solid. Less a safety more a dead bolt, but useful for storing the gun, or when you travel with it!

Sights are rifle-like; with a U-notch block on a ramp with green fibre optic insert, that’s adjustable for both elevation and limited windage, attached to the barrel at the rear and a large, red, fibre-tipped blade up front. However, Rossi have fitted a length of Picatinny rail on the frame’s top strap, so no problem mounting a red dot or compact scope; without doubt, this makes the Circuit Judge far more user-friendly for most needs. Options here would be either a compact scope, something like a lowpowered variable or fixed, or perhaps more attractive, a red dot. I used both in the form of a Vortex 1-4x24 Viper PST and an AimPoint-style red dot.

The synthetic furniture is solid and workmanlike, though not that pretty, with the forend offering a good width and chequering, along with a section of Picatinny rail at six o’clock on the tip, which will be good for lights and lasers etc. The thumbhole butt is comfortable and shows a generous cut-out and a high comb, which gives a good head and eye/scope position. The rear of the butt is hollow and here a plate can be slid off to reveal nine holes for storing ammo in. There’s also a sight plate in the side. It will take both 22 LR and 22 WMR, as the heads are the same.

On the range, the Circuit Judge acquitted itself well. I fitted the red dot sight and at 25-yards it was turning in around an 1-1.5-inches in either calibre; saying that, it had a smaller 3 MOA dot, which made aiming a lot easier. The telescopic sight pushed that out to 50- then 100-yards with ease, but it gave the gun a more top-heavy feel, as it’s not that large when compared to a proper rifle. The mechanism ran smoothly, though the D/A pull was a bit firm but not unworkable, the S/A broke crisply and cleanly and the cylinder rotated easily.

If you’re not sure about the S/A-D/A terminology, it goes like this. S/A is thumb cocking; where the hammer is manually cocked then the trigger pressed, slow but more accurate! D/A is trigger cocking; here, you squeeze the trigger and the hammer comes back and falls, it’s faster but potentially less accurate, due to the increased movement it causes. The revolver’s aforementioned air gap between cylinder and barrel might cause a slight loss of velocity when compared to a closed breach system.

The 22LR, due to its large lead bullet, had to be firmly pushed into the chambers to fully seat, whereas the 22WMR slides in easily. In both cases, ejection was positive. Plus, the ability to select either low or highpowered ammo does make the Rossi a bit of a ‘Jack of All Trades’ too. I showed the Circuit Judge to my gamekeeper friend Andrew Johnson, who sees guns like the LBPs and LBRs as good for vermin destruction for certain situations. For example, digging out foxes from a burrow, where a light and compact handgun style would prove beneficial.

For action-type shooting, this little carbine represents an eminently shootable, nononsense and reliable design in either calibre, with the 22LR giving the best economy. For the hunter, both have their uses, but the barrel is not threaded, and even if it was and a moddy fitted, you’d still get some noise from the cylinder gap.