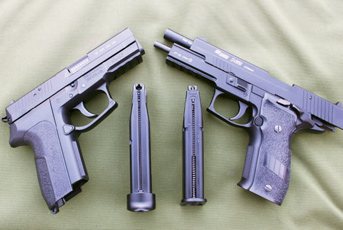 The two CO2 pistols on test here are licensed replicas from Cybergun built by KWC and based upon real SIG Sauer firearms.

They are the P226 X-Five and the SP2022. For those who may not know, the real SIG Sauers are a collaboration between two firms - Schweizerische Industrie Gesellschaft (SIG) and J. P. Sauer & Sohn.

The P226 is popular for a number of reasons; it was until quite recently the standard sidearm of much of the British Armed forces, this obviously means the deSIGn and function of the gun must be good. This Cybergun copy has a blow-back action making it more realistic, which along with the all metal construction and heavy feel does make it mimic a real SIG P226 rather well.

The removable magazine ‘clip’ holds the 12 gram CO2 bulb that powers the pistol, this is housed in the grip where the magazine on the real SIG would be. As well as the power source it also has a linear magazine for the .177 (4.5mm) BB ammunition. This is on the front face of the magazine body, it has a spring loaded plunger which has to be pulled down to allow loading. The manual says load 18 BB’s, and that’s good advice, as the magazine follower or plunger gets stuck on the loading gate after four shots if you put 20 BB’s in, preventing the gun from feeding more BB’s into the barrel.

A 12 gram CO2 bulb fits narrow end first into the base of the magazine after taking out the threaded plastic cap. The 6mm (or 1/4crv as it’s stamped up) Allen key provided can then be used to tighten the cap and pierce and seal the bulb.

When you do fire the X-Five the top slide comes back in a very realistic manner as the BB goes out of the front. To be able to do this the gun uses some of the CO2 gas from the 12gm bulb. The only downside of blow back pistols is that they have less shots and less power than a non blow-back, as we will see with the other SIG in this review. Over the chronograph the P226 gives 1.0 - 1.4ft/lbs of muzzle energy with 5.3 grain steel BB’s. It was good for 40 shots or two magazines worth. A very realistic feature is that the top slide locks open when the magazine is empty and the last shot is fired. I can see why they have this, as inserting a full magazine with the slide forward requires a bit of force - it says you can do it on the instructions but I’d recommend you have the top slide open when first putting a full magazine into the gun.

Aiming is done via fixed open SIGhts, and the front SIGht does have a white dot to aid getting a decent SIGht picture and to speed up target acquisition. The SIGht base is 165mm long. The trigger weight when the gun is operating in blow-back mode is light, it’s acting as a single action trigger. Single action weight is 1.27kg and in double action with the hammer un-cocked it jumps to 3.7kg. If you want to fit a laser or light there is a 55mm long Picatinny rail under the front of the action in front of the trigger guard. Accuracy is good; at six yards it shoots just over half and inch (15mm) groups.

The top slide can be removed for cleaning with a disassembly lever on the left hand side of the action. Ignore the BAXS system adjusting instructions as these relate to the 6mm airsoft version of this gun. This barrel is brass and is set back into the action at the front by 10mm, it has a false 9mm diameter barrel profile complete with raised rifling in that front 10mm. The field stripping, blow-back action, false barrel, last shot hold open and heavy weight all try to convince the shooter this is not just a CO2 pistol.

One major gripe about CO2 pistols in general and especially really popular ones like the SIG P226, is why is a spare magazine not included? And why are spare magazine so hard to obtain. The point of these pistols is to be able to have a bit of shooting fun, that being the case having two magazines for each gun should be standard. There is even a cut out in the X-Five’s carton to take a spare magazine, why not fill it?

The gun comes with an Allen key for fitting the CO2 bulb along with a spare end cap for the bulb well, an instruction sheet and a box of steel 4.5mm BB’s.

On to the non blow-back, and cheaper SIG Sauer CO2 pistol - the SP2022. This gun is based upon the real SP2022 made by SIG Sauer, a popular and relatively small polymer framed gun. The original has has a built in Picatinny rail and the grips can be changed to suit differing hand sizes easily. On getting hold of this CO2 version of the gun it was the grip which impressed me too. It is well shaped and heavily stippled, the magazine release catch falls under the thumb for a right-handed shooter.

The top slide is made of metal but being a non-blow back gun this does not move at all. The hammer you see at the back of the action is a faux one too, the real hammer is inside the gun and pushes back on the plastic fake one as it moves back, a return spring on the fake hammer takes it back into what looks like the fired position. The gun is double action only, meaning that the hammer cannot be manually cocked on this gun. The trigger is pulled in one operation to cock the hammer and release it to fire the gun. This type can make for a heavy trigger pull but I was pleasantly surprised with this gun as it felt smooth and quite light.

Over an electronic trigger gauge it came in at 3.1kg, not light in reality but it felt lighter than the measured trigger pull weight would suggest.  The standard 12 gram CO2 bulb is fitted in the base of the detachable magazine via a port covered by a synthetic screw cap. The 1/4crv Allen key is used to remove this and also to tighten it back up again once the bulb has been inserted. Tightening up the cap also pierces the CO2 bulb.

The linear magazine has a spring loaded plunger but no latch to lock it down while you load 4.5mm (.177) steel BB’s into it. Which is better than the P226. Along with the Allen key, a box of 4.5mm steel BB’s and an instruction manual, Cybergun have also included a speed loader which slips over the top of the magazine and has a small raised section which pushed the magazine plunger down as you slide it down the mag, it has a large aperture at the top where BB’s can be poured into from a BB tub. The magazine on the SP2022 holds 23 BB’s, compared to 18 in the P226. The magazine is tapered at the top to aid faster reloading and it certainly works. It also has tapered sides to the magazine well to speed up the insertion of a magazine. The magazine release is on the left hand side which would fall under a right hand shooter’s thumb.

The bottom of the magazine is shaped to fit around the base of the hand, and the grip on the SP2022 really is fantastic.

Not venting off CO2 to make the top slide move does have its advantages, these being more power and more shots. Over the chronograph this ‘non-blow-back’ gun performed above average, it delivered 2.11ft/lbs. of muzzle energy using 5.3 grain steel 4.5mm BB’s, much more surprising was the fact that it also did this for two magazines worth, or 50 shots.

The SIGhts are the fixed open notch type with a 144mm SIGht base, it does have the Picatinny rail under the barrel, this is 35mm long and can be fitted with lights or lasers. The front post of the SIGhts has a 2mm diameter white dot to speed up SIGht alignment and target acquisition. At six yards the gun shot sub-25mm groups all day long, good for a double action CO2 pistol.

The safety catch is on the left hand side of the gun right above the magazine release. It sits up against the fake slide release lever. In the fire position it shows a large bright red dot with an F above it. To put onto safe the catch has to be slid down towards the base of the grip. This disengages the trigger, covers up the red dot and the F and shows an S. Both the magazine release and the safety are easily operated by a right-handed shooter’s thumb.

The 100mm long brass barrel is set back 9mm from the end of the gun partially hidden inside the end of the false barrel recess. This is made to look like a .40 calibre barrel with even the spiral grooves of the rifling moulded into the barrel shape. Just like the real SIG Sauer SP2022 the grip of the CO2 gun can be easily removed, there is a latch you press inside the bottom of the mag well on the backstrap area which lets the whole grip be taken off in one piece.

I loved the operation, weight and feel of the P226 with its realistic action, but it’s low on power and shots compared to it’s stable mate the SP2022, which has a much better grip and is almost half the price. It’s a difficult decision to pick which one is the best, so I didn’t - I got both.

My thanks to the team at John Rothery for their help in production of this article. GM