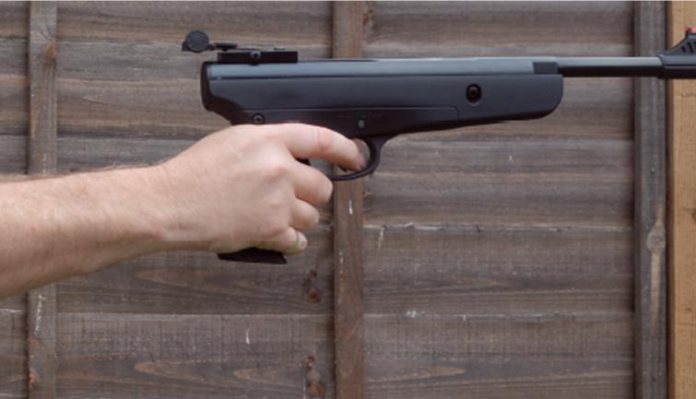 Back in the 1970s, there weren’t many air pistols around; the only ones you’d see in gunshops were variations on Webley’s barrel over cylinder design, such as Premiers, Seniors, Hurricanes etc. Then along came the powerful BSA Scorpion, which looked like a cut down rifle in a pistol grip stock. It was a real handful and many people needed the supplied cocking aid to be able to compress the spring. Fast-forward to the present day and the pistol I have here on test is very similar in layout to that old BSA, even down to the cocking aid!

When I first picked up the fairly weighty SMK Synergy S32, I suddenly got all nostalgic for three-day weeks, flared trousers and cheap beer! The break barrel format is the simplest of all the spring gun designs and the Synergy is a perfect example of the breed. The barrel and cylinder are well polished and blued (especially for an air pistol that only costs £79.95) and there are 4½-inches long scope grooves cut into the latter. The barrel pivot bolt has a keeper screw fitted to ensure a secure lock up and there is a moulded foresight block on the front of the 7½-inch long rifled barrel. The foresight blade features a red ‘Fibre Optic’ insert, which marries up well with the yellow dot-equipped, adjustable, U-notch rearsight. Numbered thumbwheels are supplied for elevation and windage adjustment but the sight can be removed if required, by loosening a single slot-headed screw. I was very tempted to fit a pistol scope but thought it best to use the supplied ‘irons’.

The black, ambidextrous grip is a one-piece synthetic unit, with an integral trigger guard, with finger grooves on the front and grippy serrations running across the sides and rear. A thumb groove is to be found on both sides of the grip and I can see it fitting both large and small hands. I found it comfortable to use, either single-handed or when adopting a more ‘combat’ style, double-handed grip. A push through ‘button’ safety catch is positioned just above the trigger and it blocks the trigger’s movement completely when pushed to the right. To disengage the catch, it is just pushed back through from the right.

I have a seven-yard range in my garage and it’s ideal for testing pistols such as this. Initially the barrel was stiff to ‘break’ but that’s actually a good sign; a sloppy barrel/cylinder junction when new would spell disaster long term, as things wore a little. This is where the handy, slipon cocking aid came in handy. After a while, the action proved a little easier to operate, so I dispensed with the aid. If I were introducing a youngster to air pistol shooting I would probably fix the cocking aid in some way, so that it stayed on all the time.

A couple of layers of tape round the end of the barrel would probably do the trick, taking up the slack between the barrel end piece and the shroud.

The Synergy proved to be quite accurate and I was getting one-inch groups with H&N FTT pellets. I got the occasional flyer though but I put that down to the rather basic trigger unit. The sights were good and the yellow and red dots made them easy to use. For informal target practice this is a great little pistol that won’t break the bank. A few reactive targets or tin cans could provide a lot of entertainment and at 4½ft/ lbs straight out of the box, it’s fairly powerful; I expect the power to increase slightly as the internal components bed in. Consistency was little short of amazing, with only a few feet per second between each shot! This pistol could also be very handy for cleanly dispatching quarry, such as rats, caught in traps.

To really get the best out of this pistol I fitted one of SMK’s own ‘Electronic Dot Sights’, it has a 33mm reflex lens aperture and has a wide field of view. The reticle can be illuminated in either red or green and there are three brightness levels. The really unusual feature though is the fact that the reticule can be changed; not for the usual selection of crosshairs or dots though but either a ‘smiley face’, ‘monster’, ‘alien’ or ‘skull’! The unit clamps to the pistol dovetail via two Allen screws; once fitted it is zeroed using the same Allen key. The right/left adjuster is on the left of the unit and the elevation adjuster is on top, just behind the rotary illumination dial. I tried all of the ‘reticules’ but eventually set it to the skull and used the nose as my point of aim. Was it any better than a crosshair-maybe not but it was certainly unusual and made hitting the paper bullseye and tin cans easy enough.

The SMK Synergy S32 is quite a chunky pistol but that’s not a criticism, far from it; it’s just that at 3Lb 4oz, it may not suit everyone. However, anyone after a powerful, accurate and consistent spring piston air pistol would do well to check it out at his or her local gunshop. At just £79.95 it’s quite a bargain as well. The red dot sight costs £29.95 and if you don’t fancy the ‘alternative’ reticule, you can choose a variant with a selection of dots etc.