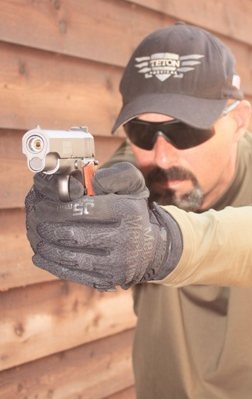 What’s not to like about an M1911 replica that is affordable, shoots really well straight out of the box and gives you the chance to own an icon? The M1911 has been called “the finest combat handgun ever built” many, many times, and I have to say from my own experiences with the real thing that it’s certainly a wonderful handgun to shoot.

At the beginning of the 20th Century most armies of the world were equipped with revolvers of varying calibres, and this was especially true of the USA where the ‘wheelgun’ was at the very core of not just the shooting culture, but the very fabric of the country itself. If the movies are to be believed the ‘West Was Won’ with revolvers, and one of the great names which springs to mind in this respect is Colt.

In actual fact though the M1911 began its life, as did many excellent firearm-designs, on the drawing board of one John Moses Browning, who, in 1898, took out a number of patents for a blowback semi-automatic pistol. Even with his track record, Browning was unable to interest any firearms manufacturers in the USA to take up his designs and another little bit of firearms history was made when he took them to Fabrique Nationale (FN) in Belgium; since the original model of 1900, FN have produced millions of Browning blowback pistols in numerous different calibres, but that is most definitely a story for another day!

Although the Browning design proved to be extremely popular, military minds at the time were convinced that any handgun adopted should be of heavy calibre with a locked breech, something which Browning’s original design was not. He subsequently applied himself to the problem and by 1900 his revised model was taken on by Colt with a view to interesting the US Army. The original pistol was developed using their .38 Calibre cartridge but the Army were adamant, after poor showings of the .38 revolvers in operational use, that any handgun to be considered should be able to fire 230gr .45 bullet.

So it was that in December 1906 the Chief of Ordnance ordered a trial to look at the effectiveness of a number of handguns that were all being offered-up to take the Army forward into the 20th Century and beyond. The Board of Enquiry met in January 1097 and tested nine pistols. Amazingly for the times they reported back swiftly and in April 1907 announced that two designs had been short-listed to go forward for extended military trials: the Colt and a model using an innovative revolving barrel system from the Savage Arms Company. Two hundred of each design were put through user-trials and at the end of this the Colt emerged triumphant… as long as a few more ‘tweaks’ were made. Once these changes were completed, the Colt Model of 1911 finally entered military service with the US Army.

Fast-forward over 100 years later and the M1911, albeit a consistently upgraded design on the original, is still in service. It’s been through two World Wars, Vietnam, and countless ‘brushfire wars’, and remained as the issued handgun of the US Armed Forces until the early 1990s when it was phased out in favour of the Beretta M9. That, of course, was the official line and although the M9 was the issued firearm many special operations units retained the venerable 1911 as their handgun of choice. At the time of writing I am reliably informed by a serving friend that the 1911 remains in use to this day, and that some units have even looked into the possibility of its re-introduction!

In the civilian marketplace the 1911 continues to thrive for all types of different handgun disciplines, and in the USA the number of manufacturers offering licenced versions, parts, and modifications is simply vast; it’s an industry all to itself from very talented individuals creating stunning one-offs to whole stores devoted purely to pistol grips in all types of exotic woods and other beautiful materials!

Amongst those to offer a full range of their own 1911s are SIG SAUER, formerly Swiss Arms, and the replica pistol received for test bears that heritage. The Swiss Arms P1911 arrived to me in a beautifully realised full-colour box which pretty much tells you everything you need to know, as there is so much information on the exterior it’s almost overwhelming! Not only do you know that this is an “Official Cybergun Licenced Product” thanks to the shiny holographic sticker, it also states several times that the pistol is a “CO2 Semi Auto Airgun .177 cal/4.5mm Blow Back, Full Metal, Metal BB, Spin Up” model. Phew!

Opening the box reveals the pistol itself, a simple instruction manual (in English, French, German, and Spanish no less!), a sturdy Allen key, and a small box containing approximately 200 steel .35g BBs.

The first thing that strikes you when you lift the pistol free of the packaging is the weight; a real 1911 is, dependant on the exact model, 1.13kg/2.75lbs and the replica comes in at a hefty 898g/1.98lbs. Just like the real thing you know immediately that you’ve got something pretty darn workmanlike in your hands.

Finished in a very appealing dark grey, the pistol is indeed all metal and feels 100% solid. The pistol grips are brown chequered, but these can be easily traded out for real wood or something more esoteric. I decided to fit a wood set that I had spare which immediately made the pistol look even better! On the left hand side of the slide is a nice ‘Swiss Arms’ logo, whilst on the right is an individual serial number and the legend “KWC Made in Taiwan” to show just where it originates from. There’s also a removable sticker which clearly states: “Energie: 1.7J Maxi”. The grips as standard are plastic diamond pattern in dark brown. The controls are exactly, and I mean 100%, the same as you would find on a real 1911, so I have to say that this is a great pistol for safety training purposes. There is both a manual and grip safety, and the hammer can actually be dropped to put the pistol in ‘condition one’; cocked, hammer dropped, and safety engaged.

Speaking of cocking, anyone who likes the slam of a top slide as much as I do will instantly fall in love! The slide is nice and heavy and when unloaded, with the magazine out, will remain locked to the rear. The slide release is on the right hand side immediately above the trigger and releasing it sends the slide slamming forward with a resounding ‘thwack’. Release slide = instant grin!

Internally the parts are of very high quality in both materials and construction, and the pistol makes use of spin-up technology which uses contact points (bumps or rollers) in the barrel to create backspin as the BB is fired. This tried and tested technology dramatically increases the gun’s range and accuracy and is perfect in a model designed specifically for metal BBs.

So, out of the box we have a beautifully constructed replica of an M1911 which is quite literally ready to go… well, almost. Of course we need the ‘driving force’ and in this instance it’s courtesy of the easily obtainable 12g CO2 cartridge. Now anyone who has fired the 1911 for real will know that in the original single stack design the pistol grip was actually surprisingly slim, and so it is with the replica. A clever design allows the CO2 cartridge to be inserted into the magazine, and in turn inserted into the pistol. This is why the pistol comes with a big old Allen key; you simply wind out the pressure plate at the base of the magazine, insert the CO2 canister, and then retighten it with the Allen key until everything is nicely seated. Not only is this an innovative answer to a tricky problem, but it means that the 18BB capacity, single stack magazine is much more like the real thing than many other replicas out there.

Once gassed-up and loaded with BBs the pistol is ready for the range. The size and weight are very good indeed, and the P1911 just feels really good in the hand. With the top slide pulled back and released the pistol is ready to fire and, of course, this is where the fun REALLY starts! Pull the crisp trigger and it goes off with a ‘crack’ followed by the slam of the cycling top slide; it really does give a great sense of recoil. Of course once the cycle has completed you simply continue firing until the magazine is empty… then reload and do it all over again, time after time!

Although the inner barrel is relatively short, with the added benefit of the spin- up the accuracy is actually particularly good. Velocity with a .35g BB is quoted at 320fps, and running a string of 10 BBs through the chrono gave me a mean of almost exactly that, with very minimal variance. Sights are simple, front blade and rear notch, so they are very straightforward to line-up on target. Although Cybergun/ KWC claim a maximum range of 64-metres/70-yards I’d defy most pistol shooters, even competition ones, to hit accurately at that range! Realistically at 10-15-metres this thing rocks, and in a short time you’ll be actively drilling the bull or sending the sinners awhirl times after time. On single aimed shot the CO2 cartridge got me through three full magazines on a warm summer afternoon, although this did drop when I decided to just let rip on full semi-auto mag dumps into the pellet catcher!