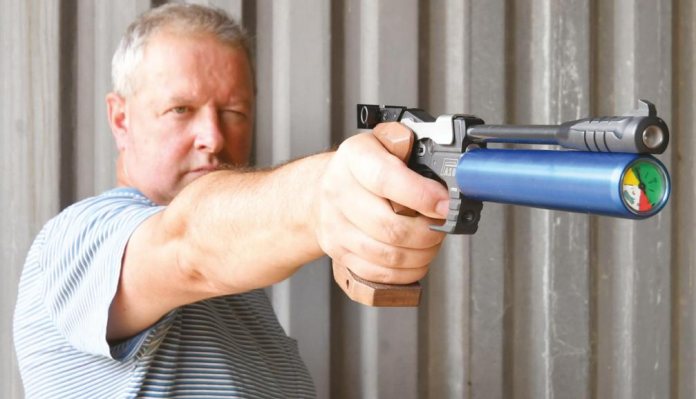 Air pistol shooting is arguably one of the hardest disciplines; and there are two reasons for that. First and most obvious, is that shooting a pistol from a single handed standing position, (as required for official competitions), is highly demanding, with none of the natural support afforded to the rifle shooter. Secondly, the inherently slow lock time of the airgun mechanism compounds the problem; placing real demands upon the participant.

It is of course, great fun and a great challenge, and any half accurate pistol can be satisfying at the early stages, but as skills improve, then you may wish to progress further; and it’s at this point that investing in top kit, built to specifically enhance performance, could well be the way forward.

Tesro, as a brand, may not be that familiar, but when you consider it was set up by a former employee of Walther in Germany, the company’s inherent pedigree should be obvious. As the ever-enthusiastic Dave Mills, of UK importers, X-Calibre explains: “it is something of a family business too, that means proper control over production methods and quality” which is all reassuring to hear.

On test, here, is the Tesro PA10-2 Basic Compact pistol, and this incorporates features designed to smooth the shooter’s path and maximise potential. OK, the asking price is admittedly in the region of £1100, based on €1210 and dependent upon the exchange rate at the time. Not cheap, but consider the outlay for rivals such as Steyr, and this model seems well placed and well-priced. So, what do we get in the box? Well, for a start the box is a neat little hard case, and inside we get an instruction manual, a box of tools, Allen keys, charging adaptor, replacement fore-sight, and even a spare breech seal. The pistol features a removable cylinder, floating barrel and air stripper, match trigger, adjustable rear sight, anatomical grips, manometer, and a spring-assisted cocking lever.

Tesro specify this pistol with what they term dual pressure technology, which basically means that it works just as well whether charged to 200bar as it does right up to 300bar. Obviously, you will get less shots at the lower pressure, but as usual with PCP airguns, you are placing components under far less stress if you can work with the lower figure.

Charging the cylinder is made easy by virtue of the fact that it can be unscrewed from the action at any time, with no clearing of shots, cocking or any other irritating procedures. An adapter plug is supplied which first needs to be screwed directly into a diver’s bottle, with the bleed valve closed. Now gently fill to the desired pressure, then, keeping the bleed valve still closed, the cylinder is simply unscrewed. A tiny amount of air escape seals the deal, and it can be screwed straight back onto the action. Placing the pressure gauge in the front of the cylinder must be the worst place to put it, for the obvious reason that it’s just too tempting to almost look down the barrel to check it! A frighteningly common fault, so manufacturers please take note!

Next stop, is to adjust the grip to suit. I have large hands, so set about slackening off both bolts inside the palm rest and pushing it down to its lowest setting. With the bolts nipped up, it was time to familiarise myself with the fit and feel of the PA10-2. All I can say is that those anatomical grips fit me like the proverbial glove, really helping to make the pistol feel like an extension of the body. It’s a cliché, but that’s what we are after ideally, with the pistol mounted, and this is where Tesro’s clever design pays off.

The open sights are comprehensive, as you might think befits a match design such as this, in that the front unit can be switched between a 4mm or 4.5mm post, either one removable at the twist of a screw. Likewise, the width of the rear U-notch can be both narrowed or widened; this time by turning a small screw either side of the sight plate assembly. Full finger wheel adjustment is here, with the one on the right controlling windage and the left hand sorting elevation. Whilst my test model was a bit stiff to start, with the rear aperture tightened down, I soon had everything zeroed nicely.

One of the great features of this pistol is that it comes with a ‘dry-fire’ facility, and that is set by pulling back the top cocking lever, (ambidextrous by the way) and with the lever still up, pressing the side button to the right. Now, close the lever down and the pistol can be fired just feeling the trigger, without expelling air. A red ring on the button shows the pistol is in live mode, and this disappears when set to ‘dry-fire’.

10 Metre Air Pistol is an Olympic event, governed by the International Shooting Sport Federation (ISSF), and the organisation lays down various rules, one of which concerns the minimum trigger pull weight allowed- which in the case of an air pistol, is set at 500g. This equates to 17.6oz which seems to me surprisingly high; especially when my obsession with triggers sees my competition rifles normally hovering around the 2 - 3oz mark! The strange thing is that much of the pistol’s trigger weight is achieved with spring pressure, and the final release of this Tesro is so clean, precise, and seemingly effortless, that those prescribed pull weights don’t seem out of place.

Cocking the stainless-steel lever is very civilised, and there is some spring-loaded assistance each way. As for the firing cycle of this model, it does feel wonderfully crisp and slick, and the signature is partly due to the neat air stripper fitted to the muzzle. Airflow is used to counteract movement, and Tesro even take the highly unusual step of machining two air release holes along the actual barrel. There’s no doubting that the action feels nice and dead as the shot is released.

The PA10-2’s action, as stated, is regulated, and from the lower specified 200bar fill pressure, and using Air Arms Diabolo pellets, I recorded 120-shots with a respectable total spread of 22 fps before pressure dropped to the refill point of 70bar. If you take the first 80-shots however, consistency showed as just 13 fps total spread, which is hard to fault. And this all with pellets taken straight from the tin.

As for accuracy, a test card comes in the case, which is 5-shots in a single pellet hole, shot at 10yds. I almost reproduced this, from a totally padded rest, I hasten to add, and after some familiarisation, and using a standing, two-handed stance, I could get groups sub an inch and I’m no pistol shot! That super-tight, ragged cluster is proof of the pudding though, that this Tesro PA10-2 Basic Compact has what it takes to compete, and in use, every element feels sophisticated and slick.

So, after a good spell with this pistol, it gets the thumbs up, for being well thought out, and neatly presented, along with a technical specification and serious performance to satisfy the most demanding of shooters. But it’s perhaps that user-friendly format that appeals the most, earning this Tesro a place on any short list of top quality match air pistols.