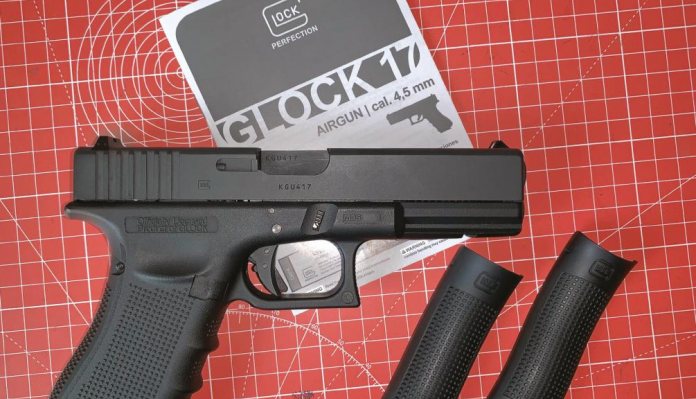 I’ve never been a fan of CO2-powered, look-a-like handguns and consider them neither fish nor fowl, when it comes to the real kit I used to own and shoot. I admit that they have certainly come a long way from those horrible things with drop-in rotary magazines, like the old Walther CP88 and similar. To put it bluntly; if it ain’t real or right, I ain’t interested, but if you do, more power to you!

And it’s a big but, I was sent the latest Umarex CO2, BB gun recentley in the form of the Glock 17 Gen 4 and I was impressed with the realism of the design, especially as I owned a number of real examples; a Model 22 in 40 S&W and my favourite, the bigger Model 20 in 10mm AUTO. The generic pistol became iconic in a short time for a handgun, not subtle or even pretty, it has a certain purposeful feel and look about it that either attracts or repels.

My first experience of the original Model 17 was in 1984 when the Editor of Handgunner Magazine (Jan Stevenson) brought one back from Pistol 84. My feelings were mixed, ugly as sin, and a polymer grip frame with just four, tiny, steel, L-shaped slide rails set into the plastic frame, supporting a big steel slide. I was convinced the first shot would rip it off and plant it in my face. But it didn’t, and I thought yes, it works, but who’d want such a weird and ugly pistol as this, especially as it didn’t have a proper safety catch? None of us then knew the impact this ‘fantastic plastic’ would create within sports shooting and the military and police world-wide. OK, history lesson over, what about the Umarex?

Firstly, it brought back many happy memories, as with a few minor and forgivable differences, it’s the Model 17 down to a T, well it would be as it’s an ‘Officially Licenced Product of Glock’. Slide markings, finish, sights and that strange trigger are 100% visually correct, although this being the Gen 4 versions it shows the railed forward frame for a tactical light or laser, an enlarged magazine release and the 360⁰ dimpled pistol grip with finger grooves at the front with vestigial, ambidextrous thumb shelves above. Also, it comes with two replacements back straps, to adjust for hand size. My Gen 2s were not quite so sophisticated.

One thing I have never liked on some CO2 pistols, was the fact that the gas cartridge went separately into the grip and the skinny BB magazine. Not so the Umarex Gen 4, as it uses a full sized and heavy design that incorporates both feed and power, so adding to realism and practicality. The trigger was right too, as it felt identical to the double-action only (DAO) pull that cocks the striker for each shot, I thought it better than the real thing. In truth, it’s different, as the magazine contains a plunger in its rear, that is hit to release a burst of gas to fire, with the hammer that strikes it not even in the slide.

Sights are identical, with a low, mid-width blade with white dot up front and a U-notch outlined in white at the back, neither is adjustable. One unusual aspect, is the secondary, applied safety positioned under the forward grip frame, that slides forward to FIRE and reverses for SAFE. The real pistol has an inset metal strip instead with the serial number stamped on it.

Stripping is the same up to a point, although the slide comes off forwards; rather than back up and forward. Pull down on the small, serrated catches either side of the frame forward and above the trigger and pull the slide back a fraction and you will hear a click then pull it forward and off. Remove the recoil spring and guide rod, then pull the barrel slightly forward and then angled it up and back out of the slide. What you see is a dummy outer tube with the actual brass, BB barrel inside.

Weight-wise the Gen 4 is 1lb 12oz, with 14oz of that being taken up by a loaded and charged magazine, with the mag out and its alloy slide, the Umarex feels positively light. To fill the magazine, a ¼” Allen key is included. The BBs go in a vertical housing in the front, you pull down on the external follower and when its at the bottom drop the BBs in through the filling hole, capacity is quoted at 18. Once full you can see the ammo with the top one in the feed lips. To gas up, using the key, undo the big hollow nut at the base and drop the 12gram CO2 capsule in, nose-first, then screws the nut back on to pierce and seal.

What I really like about this pistol is the fact the slide reciprocates with every shot, and you get a similar semi-auto feel and function, which for me was great. All you do is slap in the clip, rack the slide and squeeze the trigger; you will notice it has a blade within a blade safety system, so only a proper finger position and pull will allow it to fire. After the last round, the slide will lock open and can be released by pushing down on the catch above the mag button, or simple pulling it back and letting go.

I tested accuracy over 8 yards and the gun was shooting into 3-4” not great, but that’s not what it’s all about. The sights are non-adjustable, so you will need to work out your fall of shot and aim off. One 12-gram was returning around two mags worth with an average velocity of 305 fps and about 2 joules of energy, so low legal. The steel BBs ricochet easily, and I’d recommend a catcher and to wear safety glasses.

I enjoyed my time with the Umarex Glock Gen 4, I’m not going to rush out and buy one, but with its authentic looks and handling, fully functioning/recoiling action, blatting report, high capacity and automatic last round hold open; it let me enjoy a firearms type I loved and can no longer own. Overall, for a CO2 pistol, it’s a nice piece of work.